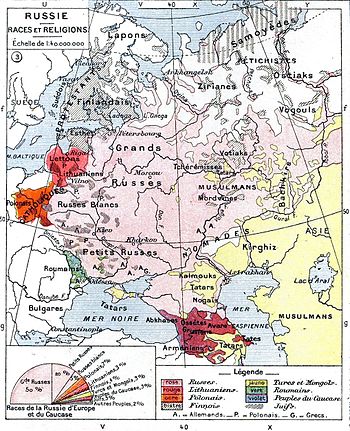 An ethnic map of European Russia before World War I.

Russia is a multi-national state with over 185 ethnic groups designated as nationalities, population of these groups varying enormously, from millions in the case of e.g. Russians and Tatars to under 10,000 in the case of Samis and Kets.[1]

There are more than 2,000 national minorities' public associations and 560 national cultural autonomies, however the Committee of Ministers has noted that in many regions amount of state support for the preservation and development of minority cultures is still inadequate.[3] There's a significant difference between "eponymous" ethnic groups and nationalities without their own national territory, as resources of the last are relatively limited.[1]

Russia is also home of a particular category of minority peoples, i.e. small indigenous peoples of the North and Far East, who maintain very traditional lifestyles, often in a hazardous climatic environment, while adapting to the modern world.[1] After the fall of the Soviet Union, Russia passed legislation to protect rights of small northern indigenous peoples.[1]

Gil-Robles has noted agreements between indigenous representatives and oil companies, which are to compensate potential damages on peoples habitats due to oil exploration.[1] As Committee of Ministers of Council of Europe noted in 2007, despite some initiatives for development, the social and economic situation of numerically small indigenous peoples was affected by recent legislative amendments at the federal level, removing some positive measures as regards their access to land and other natural resources.[3]