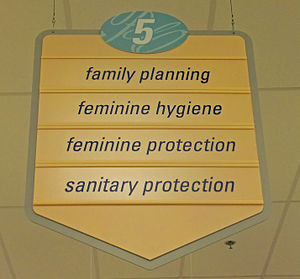 A euphemism is a generally innocuous word or expression used in place of one that may be found offensive or suggest something unpleasant.[1] Some euphemisms are intended to amuse; while others use bland, inoffensive terms for things the user wishes to downplay. Euphemisms are used to refer to taboo topics (such as disability, sex, excretion, and death) in a polite way, or to mask profanity.[2]

There are three antonyms of euphemism: dysphemism, cacophemism, and loaded language. Dysphemism can be either offensive or merely ironic; cacophemism is deliberately offensive. Loaded language evokes a visceral response beyond the meaning of the words.

Euphemism comes from the Greek word εὐφημία (euphemia), meaning "the use of words of good omen", which in turn is derived from the Greek root-words eû (εὖ), "good, well" and phḗmē (φήμη) "prophetic speech; rumour, talk".[3] Etymologically, the eupheme is the opposite of the blaspheme "evil-speaking." The term euphemism itself was used as a euphemism by the ancient Greeks, meaning "to keep a holy silence" (speaking well by not speaking at all).[4]

Euphemism use ranges from a polite concern for propriety, to attempting to escape responsibility for war crimes. For instance one reason for the comparative scarcity of written evidence documenting the exterminations at Auschwitz (at least given the scale) is "directives for the extermination process obscured in bureaucratic euphemisms."[5] Columnist David Brooks called the euphemisms for torture at Abu Ghraib, Guantánamo and elsewhere an effort to "dull the moral sensibility."[6]

Phonetic euphemism is used to replace profanities, giving them the intensity of a mere interjection.

Euphemism may be used as a rhetorical strategy, in which case its goal is to change the valence of a description from positive to negative.

Using a less harsh term with similar meaning. For instance, "screwed up" is a euphemism for "fucked up"; "hook-up", "we hooked up", or "laid" for sexual intercourse

There is some disagreement over whether certain terms are or are not euphemisms. For example, sometimes the phrase visually impaired is labeled as a politically correct euphemism for blind. However, visual impairment can be a broader term, including, for example, people who have partial sight in one eye, those with uncorrectable mild to moderate poor vision, or even those who wear glasses, a group that would be excluded by the word blind.

Euphemisms may be formed in a number of ways. Periphrasis, or circumlocution, is one of the most common: to "speak around" a given word, implying it without saying it. Over time, circumlocutions become recognized as established euphemisms for particular words or ideas.

To alter the pronunciation or spelling of a taboo word (such as a swear word) to form a euphemism is known as taboo deformation, or "minced oath". In American English, words that are unacceptable on television such as fuck, may be represented by deformations such as freak, even in children's cartoons.[7] Some examples of rhyming slang may serve the same purpose: to call a person a berk sounds less offensive than to call a person a cunt, though berk is short for Berkeley Hunt, which rhymes with cunt.[8]

Bureaucracies frequently spawn euphemisms of a more deliberate nature, doublespeak expressions. For example, in the past the US military called contamination by radioactive isotopes sunshine units.[9] A practical death sentence in the Soviet Union during the Great Purge often used the clause "imprisonment without right to correspondence:" the person sentenced never had a chance to correspond because soon after imprisonment he would be shot.[10] As early as 1939, Nazi official Reinhard Heydrich used the term Sonderbehandlung (translated into English as "special treatment") to mean summary execution, most likely by hanging, of persons who proved 'disciplinary problems' to the Nazis even before the Nazis began the systematic extermination of the Jews. Heinrich Himmler, aware that the word had come to be known to mean murder, replaced that euphemism with one in which Jews would be "guided" (to their deaths) through the slave-labor and extermination camps[11] after having been "evacuated" to their doom. Such was part of the superficially-innocuous formulation Endlösung der Judenfrage (the "Final Solution to the Jewish Question"), which became infamous to the entire world during the Nuremberg Trials.[12]

A euphemism may often devolve into a taboo word itself, through the linguistic process known as pejoration or semantic change described by W.V.O. Quine,[13] and more recently dubbed the "euphemism treadmill" by Harvard professor Steven Pinker.[14] For instance, Toilet is an 18th-century euphemism, replacing the older euphemism House-of-Office, which in turn replaced the even older euphemisms privy-house or bog-house.[15] In the 20th century, where the words lavatory or toilet were deemed inappropriate (e.g. in the United States), they were sometimes replaced with bathroom or water closet, which in turn became restroom, W.C., or washroom. The word "shit" appears to have originally been a euphemism for defecation in Pre-Germanic, as the Proto-Indo-European root *skined-, from which it was derived, meant to cut off.[16]

Doublespeak is a term sometimes used for deliberate euphemistic misuse of incorrect words to disguise unacceptable meaning, as in a "Ministry of Peace" which wages war, a "Ministry of Love" which imprisons and tortures. It is a portmanteau of the terms "newspeak" and "doublethink", which originate from George Orwell's novel 1984.

The "Dead Parrot sketch" from Monty Python's Flying Circus contains an extensive list of euphemisms for death, referring to the deceased parrot that the character played by John Cleese had purchased.

The word euphemism itself can be used as a euphemism. In the animated TV special Halloween Is Grinch Night (See Dr. Seuss), a child asks to go to the euphemism, where euphemism is being used as a euphemism for outhouse. This euphemistic use of "euphemism" also occurred in the play Who's Afraid of Virginia Woolf? where a character requests, "Martha, will you show her where we keep the, uh, euphemism?"

In Wes Anderson's film Fantastic Mr. Fox, the replacement of swear words by the word "cuss" became a humorous motif throughout the film.

In Tom Hanks' web series Electric City, the use of profanity has been censored by the word "expletive".

In Isaac Asimov's Foundation series, the curses of the scientist Ebling Mis have all been replaced with the word "unprintable". In fact, there is only one case of his curses being referred to as such, leading some readers to mistakenly assume that the euphemism is Ebling's, rather than Asimov's. The same word has also been used in his short story "Flies".