The Eurasian pygmy shrew (Sorex minutus), often known simply as the pygmy shrew, is a widespread shrew of northern Eurasia. It is the only shrew native to Ireland.[3]

Active throughout the day and night, the Eurasian pygmy shrew lives in undergrowth and leaf litter and lives off small insects and invertebrates.[4] It has an average weight of 4 grams[3] and has one of the highest metabolic rates of any animal, meaning it must eat at regular intervals — every two hours or so.[5][6]

The breeding season lasts from April through to August. Females usually produce between two and eight young per litter and care for the young in an underground nest. Since the gestation period is just over three weeks, they can have up to five litters in one year, though the life span of a pygmy shrew is a little over 15 months.[4]

In April 2008, the greater white-toothed shrew was discovered in Ireland.[7] While the introduction of the species will possibly sustain threatened birds of prey, such as the barn owl, the nonnative mammal could threaten some of the smaller native species, such as the Eurasian pygmy shrew.[7] 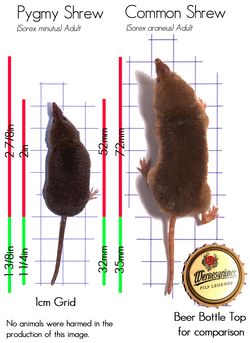