Eurocommunism was a trend in the 1970s and 1980s within various Western European communist parties to develop a theory and practice of social transformation that was more relevant for a Western European country and less aligned to the influence or control of the Communist Party of the Soviet Union. Outside Western Europe, it is sometimes referred to as "Neocommunism." This theory stresses greater independence.[1]

According to Perry Anderson, the main theoretical foundation of Eurocommunism was Antonio Gramsci's writing about Marxist theory[2] which questioned the sectarianism of the Left and encouraged communist parties to develop social alliances to win hegemonic support for social reforms. Early inspirations can also be found in the Austromarxism and its seeking of a "third" democratic "way" to socialism.

Eurocommunist parties expressed their fidelity to democratic institutions more clearly than before and attempted to widen their appeal by embracing public sector middle-class workers, new social movements such as feminism and gay liberation and more publicly questioning the Soviet Union. Eurocommunism however didn't go as far as the Anglosphere-centred New Left movement, which had originally borrowed from the French nouvelle gauche but in the course of the events went past their academic theorists, largely abandoning Marxist historical materialism, class struggle and its traditional institutions such as Communist parties.

The legacy of the Prague Spring 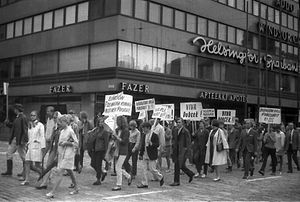 "Viva Dubček" – demonstration against the Soviet invasion of Czechoslovakia, 1968 in Helsinki 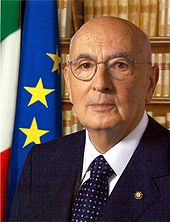 Giorgio Napolitano, prominent figure of the Italian Communist Party (until 1991), and President of Italy from 2006 to 2015.

The PCE and its Catalan referent, the United Socialist Party of Catalonia, had already been committed to the liberal possibilist politics of the Popular Front during the Spanish Civil War. The leader of the PCE, Santiago Carrillo, wrote Eurocommunism's defining book Eurocomunismo y estado (Eurocommunism and the State) and participated in the development of the liberal democratic constitution as Spain emerged from the dictatorship of Franco. The Communist parties of Great Britain, Belgium, the Netherlands and Austria also turned Eurocommunist.[6]

The PCI in particular had been developing an independent line from Moscow for many years prior, which had already been exhibited in 1968, when the party refused to support the Soviet invasion of Prague. In 1975 the PCI and the PCE had made a declaration regarding the "march toward socialism" to be done in "peace and freedom". In 1976 in Moscow, Berlinguer, in front of 5,000 Communist delegates, had spoken of a "pluralistic system" ("sistema pluralistico" translated by the interpreter as "multiform system"), and described PCI's intentions to build "a socialism that we believe necessary and possible only in Italy". The compromesso storico ("historic compromise") with Democrazia Cristiana, stopped by the kidnapping and murder of Aldo Moro in 1978, was a consequence of this new policy.

The Communist Party of Finland changed its leadership already in 1965 with leadership post changing from the Stalinist Aimo Aaltonen, who had even a picture of Berija in his office, to a "revisionist", quite popular Trade Union man, Aarne Saarinen. The same happened and even more drastically when Finnish People's Democratic League changed its leadership also, with the reformist Ele Alenius leading it. In 1968 CPFI (and) FPDL were the only parties to directly oppose the actions of the Soviet militarship in Prague in 1968. Thus, the two organizations split de facto into two different parties, one reformist and one hard-line Soviet. What was peculiar was that the Youth was nearly compltely Taistolaist. Progress was hard to make as the party accorded that the Taistolaist strongly pro-Soviet movement named after their leader, Taisto Sinisalo, had equal rights of power in the party though it was a minority and the vast majority of the CPFI/FPDL was Eurocommunist. Finally in 1984 with a strong Eurocommunist majority the PCFI hard-line organizations were massively expelled from the already weakened party. Pro-Soviet hard-liners formed their own cover-organization, "Democratic Movement". Finally in 1990 the new Left Alliance integrated the CPFI/FPDL; FPDL:s ex-secretary Alenius chose not to be member of it because they also took hard-line Taistolaists.

Western European communists came to Eurocommunism via a variety of routes. For some it was their direct experience of feminist and similar action. For others it was a reaction to the political events of the Soviet Union, at the apogee of what Mikhail Gorbachev later called the Era of Stagnation. This process was accelerated after the events of 1968, particularly the crushing of the Prague Spring. The politics of détente also played a part. With war less likely, Western communists were under less pressure to follow Soviet orthodoxy yet also wanted to engage with a rise in western proletarian militancy such as Italy's Hot Autumn and Britain's shop steward's movement.

The origin of the term "Eurocommunism" was subject to great debate in the mid-1970s, being attributed to Zbigniew Brzezinski and Arrigo Levi, among others. Jean-François Revel once wrote that "one of the favourite amusements of 'political scientists' is to search for the author of the term Eurocommunism." In April 1977, Deutschland Archiv decided that the word was first used in the summer of 1975 by Yugoslav journalist Frane Barbieri, former editor of Belgrade's NIN Newsmagazine.

Eurocommunism was in many ways only a staging ground for changes in the political structure of the European left. Some – principally the Italians – became social democrats, while others like the Dutch CPN moved into green politics and the French party during the 1980s reverted to a more pro-Soviet stance.

Eurocommunist ideas won at least partial acceptance outside of Western Europe. Prominent parties influenced by it outside of Europe were the Movement for Socialism (Venezuela), the Japanese Communist Party, the Mexican Communist Party and the Communist Party of Australia.[6] Mikhail Gorbachev also refers to eurocommunism as a key influence on the ideas of glasnost and perestroika in his memoirs.

The collapse of the Soviet Union and the end of the Cold War put practically all Leftist parties in Europe on the defensive, and made neoliberal reforms the order of the day, many Eurocommunist parties split, with the Right factions (such as Democratici di Sinistra or Iniciativa per Catalunya) adopting social democracy more whole-heartedly, while the Left strove to preserve some identifiably Communist positions (Communist Refoundation Party in Italy or PSUC viu/Communist Party of Spain).

Two main criticisms have been advanced against Eurocommunism. First, it is alleged by right-wing critics that Eurocommunists showed a lack of courage in definitively breaking off from the Soviet Union (the Italian Communist party, for example, took this step only in 1981, after the repression of Solidarność in Poland). This "timidity" has been explained as the fear of losing old members and supporters, many of whom admired the USSR, or with a realpolitik desire to keep the support of a strong and powerful country.

Other critics point out the difficulties the Eurocommunist parties had in developing a clear and recognisable strategy. [7] They observe that Eurocommunists have always claimed to be different – not only from Soviet communism but also from social democracy – while, in practice, they were always very similar to at least one of these two tendencies. Thus, critics argue that Eurocommunism does not have a well-defined identity and cannot be regarded as a separate movement in its own right.[citation needed]

From a Trotskyist point of view, Ernest Mandel in From Stalinism to Eurocommunism: The Bitter Fruits of 'Socialism in One Country' views Eurocommunism as a subsequent development of the decision taken by the Soviet Union in 1924 to abandon the goal of world revolution and concentrate on social and economic development of the Soviet Union, the doctrine of "socialism in one country". According to this vision the Eurocommunists of the Italian and French communist parties are considered to be nationalist movements, who together with the Soviet Union abandoned internationalism. This is analogous to the social democratic parties of the Second International during the First World War, when they supported their national governments in prosecution of the war.

The conservative author and journalist Peter Hitchens (a former Trotskyist) has described Eurocommunism as the intellectual basis of Blairism, the political ideology of former Prime Minister Tony Blair.[8][9]

From an Anti-Revisionist point of view, Enver Hoxha in Eurocommunism is Anti-Communism[10] argues that Eurocommunism as the result of Nikita Khrushchev's policy of peaceful coexistence. Khrushchev was accused of being a revisionist who encouraged conciliation with the bourgeoisie rather than adequately calling for its overthrow by the dictatorship of the proletariat. He also stated that the Soviet Union's refusal to reject Palmiro Togliatti's theory of polycentrism encouraged the various pro-Soviet communist parties to moderate their views in order to join cabinets, which in turn forced them to abandon Marxism-Leninism as their leading ideology.

More generally, from the point of view of most revolutionary left-wing movements, Eurocommunism simply meant an abandonment of basic communist principles, such as the call for a proletarian revolution, which eventually led many Eurocommunists to abandon communism or even socialism altogether (by giving up their commitment to overthrow capitalism). Such critics felt strongly vindicated when several Eurocommunist parties scrapped their communist credentials following the fall of the Soviet Union.