European Bank for Reconstruction and Development

The European Bank for Reconstruction and Development (EBRD) is an international financial institution founded in 1991. As a multilateral developmental investment bank, the EBRD uses investment as a tool to build market economies. Initially focused on the countries of the former Eastern Bloc it expanded to support development in 30 countries from central Europe to central Asia. Besides Europe, member countries of the EBRD are from all 5 continents (North America, Africa, Asia and Australia see below), with the biggest shareholder being the United States, so the name is somewhat of a misnomer. Headquartered in London, the EBRD is owned by 64 countries and two EU institutions. Despite its public sector shareholders, it invests mainly in private enterprises, together with commercial partners.

The EBRD is not to be confused with the European Investment Bank (EIB), which is owned by EU member states and is used to support EU policy. 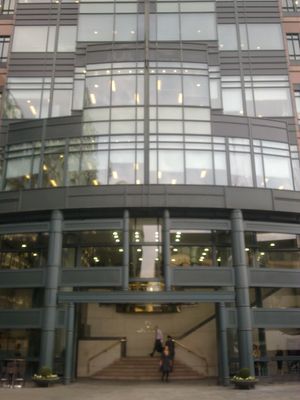 The EBRD was founded in April 1991 during the dissolution of the Soviet Union by representatives of 40 nations from 3 continents and two European institutions, the European Investment Bank (EIB) and, after reaching agreement on the bank's charter, size, and distribution of power among shareholders.[1]

In 2006, EBRD stated it would cease spending in the Baltic and central European nations by 2010, and would shift funding to Russia, Ukraine, Armenia, Kazakhstan and Uzbekistan.[2] In 2010, due to the Great Recession, this process was postponed until 2015.[3][page needed]

The EBRD was founded to support countries of the former Eastern Bloc in the process of establishing their private sectors.[4] To that end, it offers "project financing" for banks, industries and businesses, for new ventures or existing companies. It works with publicly owned companies to support their privatization, as advocated by the WTO since the 1980s [5] and "improvement of municipal services".

The EBRD mandates to work only in countries that are "committed to democratic principles". It promotes "environmentally sound and sustainable development", and does not finance "defense-related activities, the tobacco industry, selected alcoholic products, substances banned by international law and stand-alone gambling facilities".[citation needed]

Some NGOs have criticized the EBRD for financing projects they consider to be environmentally and socially harmful. Although it has increased its investments into energy efficiency and sustainable energy in recent years, these NGOs consider the bank continues to diminish the impacts of green investments by financing carbon-intensive development such as coal, oil and gas production, transportation and generation, motorways, and airports.[6][7] Among the contested projects are the Ombla power plant in Croatia,[8][9] the Kumtor Gold Mine in Kyrgyzstan, and the Šoštanj lignite power plant in Slovenia.[6]

NGOs have criticized the EBRD on the lack of progress the EBRD makes in its main mission, the “transition towards open and democratic market economies.”[10][11] For example, the EBRD reported that 67% of the people in its countries of operation indicated that corruption was the same or worse in 2006 compared to 1989.[12]

The EBRD announced on 23 July 2014 that it would suspend new investment projects in Russia, following an earlier declaration by the European Council.[13] The European Council declaration was made in the context of the 2014 pro-Russian unrest in Ukraine.[14] As of 2014[update] Russia has been the biggest funding recipient of all countries. In 2013, the Russian Federation received 1.8 billion € for investments from the EBRD and 1 billion € from the EIB. Russia employed the funds to finance a variety of projects like pipeline valves, property acquisitions, and a loan to a hypermarket chain. Two Russian projects were awaiting funding from the EBRD: a 300 million € plan for promoting energy efficiency,and a $180 million loan to lease agricultural and forestry equipment.[15][16] The bank stated that it will continue to manage on-going projects in Russia.[13] 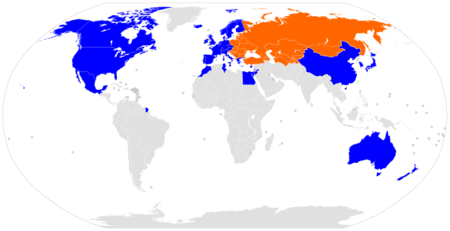 The EBRD publishes its tenders and contracts in Development Business. a publication launched in 1978 by the United Nations with the World Bank and other development banks.[20]

To be eligible for EBRD funding, "a project must be located in an EBRD country of operations, have strong commercial prospects, involve significant equity contributions in-cash or in-kind from the project sponsor, benefit the local economy and help develop the private sector and satisfy banking and environmental standards."

Since its founding in 1991, so far only the Czech Republic has graduated from borrower to shareholder within EBRD, in 2007.[23]