The European Green Party was founded on 22 February 2004 at the Fourth Congress of the European Federation of Green Parties (EFGP) in Rome attended by over 1,000 delegates. Thirty-four Green parties from all over Europe have joined this new pan-European party. The Greens were the first to form a political party at European level. The other European political federations followed suit in the period 2004–2006. For the Greens this was the culmination of a process which had started with the formation of a loose co-ordination 1979–1993 and the EFGP 1993–2004.[2]

In the 1984 election the Greens participated again. They held a congress in the spring of 1984 in Liège and set up a restructured European Green Coordination (EGC), with a secretariat provided by the Dutch Political Party of Radicals. They also issued a Joint Declaration of the European Green Parties. Furthermore, overall the member parties had grown stronger. Eleven MEPs of member parties were elected to the European Parliament.[4] They formed the Green Alternative European Link (GRAEL) in the European Parliament. The group was too small to be recognised by the Parliament for funds and committees and therefore it joined the Rainbow Group, which also encompassed regionalists, the Danish People's Movement against the European Community and some radicals and socialists.

The European Greens formed a loose confederal triangular structure with the autonomous GRAEL in parliament, the weak EGC as a supra-national co-ordinating body and the member parties. The position of the European Greens was also weakened by the principle of rotation which some member parties (Germany and the Netherlands) used, with their MEPs being replaced by another after serving half their term. This rotation technique originated with the German Greens to prevent their members being co-opted by the informal negotiation system within the Bundestag,[5] but it served them badly within the European Parliament.

For the Dutch parties, the choice for rotation was a compromise between three parties which had only two seats in parliament: one seat was kept by the top candidate while the second seat rotated between the second and the third candidate. This way each party would have a representative in the EP. Finally, there still was considerable diversity in the opinions of the Greens, especially between pro-European and Eurosceptic tendencies. These factors weakened the position of the Greens in Parliament.

In the 1989 election the Green parties won 26 seats.[6] Because of political conflicts with the continuing Rainbow Group, the European Greens formed a separate parliamentary group, The Green Group in the European Parliament. During this period, the Greens became more entrenched in parliament.

In June 1993 the European Federation of Green Parties was formed by the members of the EGC in Kirkkonummi, Finland. The organisation became more structured, it now had a triennial Congress, a Council and a Federation Committee (executive). It strengthened its ties with the Green Group in the European parliament.

In the 1994 European elections Green parties won a total of 20 seats.[7] They were joined by a member of the Danish Socialist People's Party and one member of both the Italian South Tyrolean People's Party and The Network. Again the Greens formed a separate group from Rainbow Group, now renamed the European Radical Alliance.

In the 1999 European elections the European Greens performed particularly well winning 38 seats.[8] They formed a combined group with the European Free Alliance, which represented regionalist parties and independence movements, which previously participated in the European Radical Alliance. The relationship between the Greens and these parties was different from before, as the Greens were stronger both numerically and politically.

The European Green Party was founded at the Fourth Congress of the European Federation of Green Parties on 20–22 February 2004 in Rome, a party convention with over 1,000 delegates. Thirty-two Green parties from all over Europe joined this new pan-European party. The foundation of the new party was finalised with the signing of the treaty constituting the party in the Capitol of Rome. As such the Greens were the first to form a political party at European level, the other European federations followed suit between 2004 and 2006.

However, its relationship to the European Union and its institutions has changed dramatically and is still the subject of a lively debate. In the 1970s and 1980s the European Greens were generally sceptical of European political and economic integration, which was seen as contrary to environmental and social interests. In its 1984 program, the European Greens advocated the formation of an alternative Europe, which would be neutral and decentralised. In 1989, some member parties adopted a more parliamentary course and became more supportive of European integration. The program advocates the democratisation of Europe's institutions. In their 1994 program, the Greens abandoned their principled opposition of European integration and began to propose pragmatic alternatives for the European Union's policies and institutions. The 1999 and 2004 programs also reflect this.[citation needed]

In the area of Internet politics, The Greens–European Free Alliance parliamentary group became famous for the strong support of a proposed free information infrastructure, especially in their work on the directive against software patents in 2003.[citation needed]

Nowadays the majority of the party is European federalist. Its former leader, Daniel Cohn-Bendit, is a member of the federalst The Spinelli Group, and has written with Guy Verhofstadt a book with a federalist manifesto purpose. The European Green Party affiliated to the European Movement International in February 2014.[10] 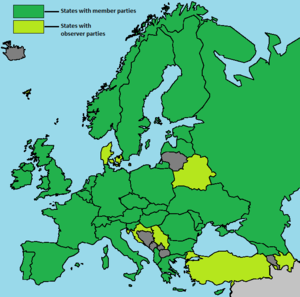 States with member and observer parties of the European Greens in 2011.

The European Green Party is an international association without lucrative purpose constituted out of political parties from European countries (although not necessarily from European Union member states). Parties can also become associate member. Members of the Green Group not belonging to a member party can be admitted as a special member with speaking rights but no vote.

The governing bodies of the EGP are the Council and the Committee.[16]

The European Greens are organised in several regional networks. These are organised around seas, creating somewhat of a bioregional structure: such as the Green Islands Network ("a network for Green Parties in Britain, Ireland and associated islands"), the Baltic Sea Greens, the Green Mediterranean Network, Green Adriatic Network and the North Sea Greens.

The Full, Candidate and Associate Members are listed in Annex B of the Rule Book.[18]

De Grønne from Denmark were expelled from the EGP in 2008. The reason was that De Grønne intended to co-operate with the People's Movement against the EU in the upcoming 2009 European elections, a national party which sits in the rival European United Left–Nordic Green Left parliamentary group instead of The Greens–European Free Alliance.

Zöld Baloldal from Hungary withdrew its membership on September 7, 2015 because of financial reasons.

The EGP fosters a European Network of Green Seniors and a European Green Gender Observatory.

Formally The Greens–European Free Alliance (Greens/EFA) in the European Parliament is also an independent organisation with official ties to the EGP.

The EGP affiliated to the European Movement International in February 2014.[10]