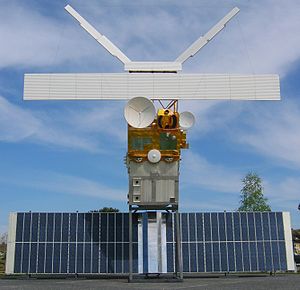 A full-size model of ERS-2.

European remote sensing satellite (ERS) was the European Space Agency's first Earth-observing satellite programme using a polar orbit. The first satellite was launched on 17 July 1991 into a Sun-synchronous polar orbit at an altitude of 782–785 km.

ERS-1 carried an array of earth-observation instruments that gathered information about the Earth (land, water, ice and atmosphere) using a variety of measurement principles. These included:

To accurately determine its orbit, the satellite included the PRARE (Precision Range and Range-Rate Equipment) and a Laser Retroreflector. The PRARE became non-operational shortly after launch. The Retroreflector was used for calibrating the Radar Altimeter to within 10 cm.

ERS-1 had various mission phases using 3-day, 35-day and a 336-day repeat cycle. The 336-day mission (Geodetic Mission) allowed for accurate mapping of the Earth's bathymetry and geoid over the seas using the Radar Altimeter.

Its successor, ERS-2, was launched on 21 April 1995, on an Ariane 4, from ESA's Guiana Space Centre near Kourou, French Guiana. Largely identical to ERS-1, it added additional instruments and included improvements to existing instruments including:

When ERS-2 was launched, ERS-1 shared the same orbital plane. This allowed a tandem mission, with ERS-2 passing the same point on the ground 1 day later than ERS-1. ERS-2 has a repeat cycle of 35 days.

ERS-2 has been operating without gyroscopes since February 2001, resulting in some degradation of the data provided by the instruments. The tape drive aboard failed on 22 June 2003, leaving the instruments operating only within visibility of a ground station. Since the tape drive failure additional ground stations have been brought online to increase the data gathering abilities of the satellite. The Wind Scatterometer and GOME were the only instruments of their kind until the launches of MetOp-A and Envisat, respectively.

The successor to ERS-2 is Envisat containing improved versions of many of the instruments onboard ERS-2; however, its operational life was increased until 2011. Over a series of burns in July, August and September, ERS-2 was finally depleted of all fuel on 5 September 2011. At 13:16:38 the batteries were switched off, leaving the spacecraft in an orbit where it will reenter the Earth's atmosphere and safely disintegrate within 25 years, in accordance with international standards.