The European water vole or northern water vole, Arvicola amphibius (formerly A. terrestris), is a semi-aquatic rodent. It is often informally called the water rat, although it only superficially resembles a true rat.[3] Water voles have rounder noses than rats, deep brown fur, chubby faces and short fuzzy ears; unlike rats their tails, paws and ears are covered with hair.

In the wild, on average, water voles only live about five months. Maximum longevity in captivity is 2 and a half years.[4]

Overall, European water voles are a uniform dark brown colour, with slightly paler coloration on the underside. Their pelage is quite thick and they are furred over their entire body, including their tail, unlike rats. Their dark colour allows them to blend in well in the densely vegetated areas they inhabit.[9]

The binomial applied to the water vole is Arvicola amphibius, it was formerly known by the junior synonym A. terrestris. The confusion stems from the fact that Linnaeus described two species of water vole on the same page of the same work. Those two forms are now universally considered the same species. It has been recognized as A. amphibius (Linnaeus, 1758) because the first source to unite the two forms that Linnaeus had treated separately into a single species chose A. amphibius as the valid name.[1] The species is widely known by the synonym A. terrestris which for many decades was treated as the valid name.

Some authorities consider the southwestern water vole (Arvicola sapidus) to be the same species, but this is now generally considered to be distinct.[2][10]

The water vole Arvicola amphibius is found in most of Europe, Russia, West Asia and Kazakhstan.[2] 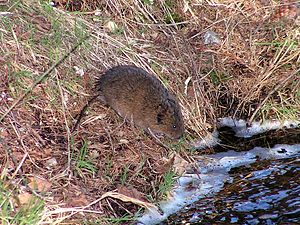 In Britain, water voles live in burrows excavated within the banks of rivers, ditches, ponds, and streams. Burrows are normally located adjacent to slow moving, calm water which they seem to prefer. They also live in reed beds where they will weave ball shaped nests above ground if no suitable banks exist in which to burrow.

Water voles prefer lush riparian vegetation which provides important cover to conceal animals when they are above ground adjacent to the water body. Areas of heavily grazed and trampled riparian habitats are generally avoided.[11] Water voles may be displaced by the introduction of riparian woodland and scrub as they prefer more open wetland habitats away from tree cover.

In Europe and Russia, they may venture into woods, fields, and gardens. They live under the snow during the winter.

Water voles mainly eat grass and plants near the water. At times, they will also consume fruits, bulbs, twigs, buds, and roots. In Europe, when there is enough food to last water voles a long time, water vole "plagues" can take place. Water voles eat ravenously, destroying entire fields of grass and leaving the fields full of burrows, during these plagues. Ecologists have discovered that normally vegetarian water voles living in Wiltshire, England have started eating frogs' legs and discarding the bodies. This has also been observed at a pond in Lincolnshire. The predation in 2014 was severe and no tadpoles were observed in the pond for the first time in about 8 years. It has been speculated that this is to make up for a protein deficiency in the voles' diet.[13]

Food remains alone are not a reliable indicator of the presence of this species, as other smaller voles can also leave remains of large grasses and rushes.[14]

The mating period lasts from March into late autumn. The female vole's pregnancy lasts for approximately 21 days. Up to 8 baby voles can be born, each weighing around 10 grams (0.4 oz). The young voles open their eyes three days after their birth. They are half the size of a full grown water vole by the time they are weaned.

Water voles are expert swimmers and divers. They do not usually live in large groups. Adult water voles each have their own territories, which they mark with fecal latrines located either near the nest, burrow and favoured water's edge platforms where voles leave or enter the water.[12] Latrines are known to be a good survey indicator of this species, and can be used to gauge abundance of animals.[15] They also scent-mark by using a secretion from their bodies (a flank gland), although this is not normally detectable during a field survey. They may attack if their territory is invaded by another water vole.

As a large and common microtine rodent, the range of predators faced by the European water vole is truly daunting. However, many species of predator prefer other rodents, such as Microtus voles and wood mice, due to their greater numerical abundance.[7] Wildcats, red foxes, most species of hawk (especially common buzzards), owl (especially the barn owl, Strix genus and Eurasian eagle-owl) and falcon (in large numbers by the common kestrel) in their range are among their reported predators. A very large number are also taken by mustelids. Reportedly small Mustela weasels as well as European and introduced American mink may take the largest number of water voles of any predator due in part to aligning habitat preferences.[7][16] The rarely checked invasive population of American mink has reportedly caused a decline of water voles in Britain.[17]

The water vole population in the UK has fallen from its estimated pre-1960 level of around 8 million to 2.3 million in 1990 and to 354,000 (other source: 750,000) in 1998. This represents a 90–95% loss. It is still declining dramatically: the most recent estimate for 2004 is around 220,000. This decline is partly attributed to the American mink, an aggressive predator of the vole, together with unsympathetic farming and watercourse management which destroyed parts of the water vole's habitat.

On 26 February 2008, the UK Government announced full legal protection for water voles would be introduced from 6 April 2008.[18] This makes it an offence to disturb, damage or obstruct their breeding places.

The water vole is the UK's fastest declining mammal and efforts are under way to protect it and its habitat from further destruction. One aspect of water vole conservation in the UK is focused on non-linear habitats such as reed bed which support extensive networks or metapopulations. Other areas supporting healthy populations of water voles are large conurbations such as Birmingham and London and some upland areas where American mink are scarce. Across the UK the Wildlife Trusts and other organisations are undertaking many practical projects to conserve and restore water vole populations.

Water voles have recently returned to Lindow Common nature reserve in Cheshire, UK, after many years of absence.[19] The reserve rangers credit this to conservation management, which included thinning of woodland.

Wetlands West (formerly the Severn and Avon Vales Wetlands Partnership) reports on work done as part of the Water Vole Recovery Project in the Berkeley Vale.[20] In Gloucestershire a new nature reserve for water voles was created in 2009/2010 at Nind (a former trout farm).

There are also indications that the water vole is increasing in numbers in UK areas where the European otter has made a return.[21]

In 2015 People's Trust for Endangered Species launched a new project to try and coordinate conservation efforts for the water vole in the UK. The National Water Vole Monitoring Programme (NWVMP) is the first ongoing monitoring scheme for this species in the UK and aims to bring together data from several hundred sites to allow the status of this animal to be assessed year-on-year.[22]

A water vole named "Ratty" is a leading character in the 1908 children's book Wind in the Willows by Kenneth Grahame: the locality used in the book is believed to be Moor Copse in Berkshire, England, and the character's name "Ratty" has become widely associated with the species and their riverbank habitat, as well as the misconception that they are a species of rat.[23][24]

In the comic novel and film Cold Comfort Farm by Stella Gibbons, one of the characters, Urk, refers to the subject of his unrequited love, Elfine Starkadder, as his little water vole. Throughout the story, Urk spends a lot of time talking to the water voles on the farm.

C. S. Calverley a 19th-century writer of (among other things) light verse, in his poem "Shelter," beginning:

By the wide lake's margin I mark'd her lie--

The wide, weird lake where the alders sigh--

Tells of an apparently shy, easily frightened young female by a lakeside, who in the last line of the poem, it's revealed that:

For she was a water-rat.