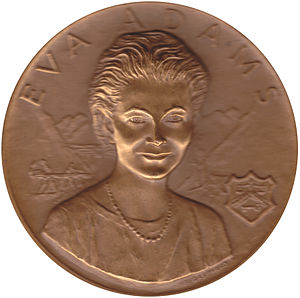 Eva Adams was born in Wonder, Nevada[1] on September 10, 1908, the daughter of Verner Laur Adams and his wife Cora (Varble) Adams.[2] Her father worked for mining magnate George Wingfield, and was responsible for setting up hotels, commissaries, and bars in Wingfield's mining camps.[2] As such, the family moved around from camp to camp for several years before Adams' mother insisted the family settle down and they settled in Reno, Nevada.[2] Adams graduated from Reno High School at age 14. She then attended the University of Nevada, Reno, where she was a member of Kappa Alpha Theta,[3] graduating in 1928, at age 19.[2]

After graduating from college, Adams moved to Las Vegas, Nevada to become a teacher at Las Vegas High School.[2] During this time, she became involved with the Clark County Democratic Party and was introduced to Pat McCarran.[2]

Adams then attended graduate school at Columbia University, receiving a master's degree in English in 1936.[4] She also went on to obtain an LL.M. from the Georgetown University Law Center and an LL.D. from American University.[5]

She returned to Nevada in 1940 to briefly join the English department of the University of Nevada, Reno; shortly thereafter, Pat McCarran, by now United States Senator for Nevada, invited her to move to Washington, D.C. to become his Administrative Assistant.[5] She worked for Senator McCarran until his death in 1954.[5] She then worked for McCarran's successor, Ernest S. Brown, in 1954, and then Alan Bible from 1954 to 1960.[5]

Upon retiring from government service in 1969, Adams worked for Mutual of Omaha for a while, before returning home to Reno.[5]