The Evangelical Church in Germany (German: Evangelische Kirche in Deutschland, abbreviated EKD) is a federation of twenty Lutheran, Reformed (Calvinist) and United (Prussian Union) Protestant regional and denominational churches in Germany, collectively encompassing the majority of Protestants in that country. The EKD is not a church in a theological understanding, because of its denominational differences.

In 2012, the EKD had a membership of 23,356,096 church-goers, or 29.0% of the German population.[4] It constitutes one of the largest national Protestant bodies in the world, behind the Church of England and Church of Christ in Congo.

Formed in 1948, the Evangelical Church has undergone a split as a result of tensions between West and East Germany in 1969. The EKD did not merge back until 1991.

The member churches (Gliedkirchen), while being independent and having their own theological and formal organisation, share full pulpit and altar fellowship, are united in the EKD synod, and are individual members of the World Council of Churches (WCC) and the Community of Protestant Churches in Europe (CPCE). Boundaries of EKD churches within Germany partially resemble those of the states of the Holy Roman Empire and successor forms of German statehood, due to the historical close relationship between individual German states and churches.

As for church governance, the Lutheran churches typically practise an Episcopal polity, while the Reformed and the United ones a mixture of Presbyterian and Congregationalist polities. Most member churches are led by a (state) bishop. Only one member church, the Evangelical Reformed Church, is not restricted to a certain territory. In some ways, the other member churches resemble dioceses of the Roman Catholic and Anglican churches, from an organisational point of view. 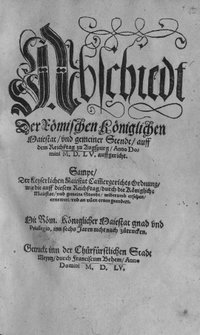 Front page of the Peace of Augsburg, which laid the legal groundwork for two co-existing religious confessions (Roman Catholicism and Lutheranism) in the German-speaking states of the Holy Roman Empire.

From the Peace of Augsburg in 1555 to the end of the First World War and the collapse of the German Empire, some Protestant churches were state churches. Each Landeskirche[1] (state or regional church) was the official church of one of the states of Germany, while the respective ruler was the church's formal head (e.g. the King of Prussia headed the Evangelical Church of Prussia's older Provinces as supreme governor), similar to the British monarch's role as the Supreme Governor of the Church of England.

This changed somewhat with growing religious freedom in the 19th century, especially in the republican states of Bremen, Frankfurt (1857), Lübeck, and Hamburg (1860). The greatest change came after the German Revolution, with the formation of the Weimar Republic and the abdication of the princes of the German states. The system of state churches disappeared with the Weimar Constitution, which brought about disestablishment by the separation of church and state, and there was a desire for the Protestant churches to merge. In fact, a merger was permanently under discussion but never materialised due to strong regional self-confidence and traditions as well as the denominational fragmentation into Lutheran, Reformed, and United and uniting churches. During the Revolution, when the old church governments lost power, the People's Church Union (Volkskirchenbund) was formed and advocated unification without respect to theological tradition and also increasing input from laymen. However, the People's Church Union quickly split along territorial lines after the churches' relationship with the new governments improved.[6]

It was realised that one mainstream Protestant church for all of Germany was impossible and that any union would need a federal model. The churches met in Dresden in 1919 and created a plan for federation, and this plan was adopted in 1921 at Stuttgart. Then in 1922 the then 28 territorially defined Protestant churches founded the German Evangelical Church Confederation (Deutscher Evangelischer Kirchenbund, DEK). At the time, the federation was the largest Protestant church federation in Europe with around 40 million members.[6] Because it was a federation of independent bodies, the Church Union's work was limited to foreign missions and relations with Protestant churches outside Germany, especially German Protestants in other countries.

In July 1933, the German Evangelical Church (Deutsche Evangelische Kirche, DEK) was formed under the influence of the German Christians. The Confessing Church arose in resistance to the Nazi regime's ideology. The National Socialists had much influence over the decisions of the first National Synod, via their unambiguous partisanship in successfully backing Ludwig Müller for the office of Reich bishop. He did not manage, however, to prevail over the Landeskirchen in the long term, and after the installation of Hanns Kerrl as minister for church matters in a Führer-directive of 16 July 1935 and the foundation of the – in the end not materialising – Protestant Reich Church, the DEK played more or less no further role. 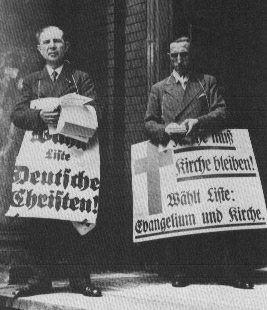 In 1948, freed from the German Christians' influence, the Lutheran, Reformed and United churches came together as the Evangelical Church in Germany at the Conference of Eisenach. In 1969, the regional Protestant churches in East Germany and East Berlin[7] broke away from the EKD and formed the League of Evangelical Churches in the German Democratic Republic (German: Bund der Evangelischen Kirchen in der DDR, BEK), in 1970 also joined by the Moravian Herrnhut District. In June 1991, following German reunification, the BEK merged with the EKD.

While the members are no longer state churches, they enjoy constitutional protection as statutory corporations, and they are still called Landeskirchen, and some have this term in their official names. A modern English translation, however, would be regional church. Apart from some minor changes, the territories of the member churches today reflect Germany's political organisation in the year 1848, with regional churches for states or provinces that often no longer exist or whose borders changed since. For example, between 1945 and 1948, the remaining six ecclesiastical provinces (Kirchenprovinzen), each territorially comprising one of the Old Prussia provinces, within the Evangelical Church of the old-Prussian Union assumed independence as a consequence of the estrangement among them during the Nazi struggle of the churches. This turned the Evangelical Church of the old-Prussian Union into a mere umbrella, being itself a member of EKD (and the BEK, 1969–1991) but covering some regional church bodies, which were again themselves members of EKD (and the BEK, 1969–1991).

Since 1973, when many Protestant churches in Europe, including the EKD members, concluded the Leuenberg Agreement, also the then 21 EKD members[8] introduced full communion for their parishioners and ministry among each other. Since also the regional Protestant churches in East Germany had signed the Leuenberg Agreement, thus the then ten members of the Federation of Protestant Churches in the German Democratic Republic practised full communion with the EKD members too. Ordination of women is practised in all 20 member churches with many women having been ordained in recent years. There are also several women serving as bishops. Margot Käßmann, former Bishop of the Evangelical Lutheran Church of Hanover and Chairperson of the Council of the EKD from 2009 until February 2010, was the first woman to head the EKD.[9] Blessing of same-sex unions is practised in 11 member churches.[10]

Protestantism is the major religion in Northern, Eastern and Middle Germany: the Reformed branch in the extreme northwest and Lippe, the Lutheran branch in the north and south, and the United branch in Middle and Western Germany. While the majority of Christians in Southern Germany are Roman Catholic, some areas in Baden-Württemberg and Bavaria are predominantly Protestant, e.g. Middle Franconia and the government region of Stuttgart. The vast majority of German Protestants belong to a member church of the EKD. With 25,100,727 members in 2006,[12] around 30 percent of all Germans belong to a member church of the EKD.[13] Average church attendance is lower, however, with only around a million people attending a service on Sunday.[14]

The structure of the EKD is based on federal principles. Each regional church is responsible for Christian life in its own area while each regional church has its own special characteristics and retains its independence. The EKD carries out joint tasks with which its members have entrusted it. For the execution of these tasks, the Church has the following governing bodies, all organised and elected on democratic lines:

The Synod is the legislature of the EKD. It has 126 members - 106 elected by Landeskirchen synods and 20 appointed by the Council.[15] These 20 are appointed for their importance in the life of the Church and its agencies. Members serve six year terms and the synod meets annually.

Council of the EKD

The EKD Council is the representative and governing body of the Evangelical Church in Germany. The Council of the EKD has 15 members jointly elected by the Synod and Church Conference who serve terms of six years.[16]

Heinrich Bedford-Strohm, the Chairman of the Council of the EKD.

Chairman of the Council of the EKD

The representative of the EKD is the Chairman of the Council of the EKD.

The Church Conference is where member churches, through the representatives of their governing boards, can directly participate in the work of the EKD.[17]

Church Office of the EKD

The Church Office is the administration of the EKD and shall the business of the Synod, Council and Conference of the EKD.[18]

The EKD helds various charities ("Hilfswerke")under its auspices. The GAW (Gustaphus Adolphus Union formerly) was founded 1832 in Leipzig as the first and eldest such organization and is responsible to aid feeble sister churches, especially in Roman Catholic countries and the Protestant diaspora. It has separate branches internationally, the organization in Austria is still called the Gustav-Adolf-Verein.[19] Brot für die Welt is responsible for international developement aid. 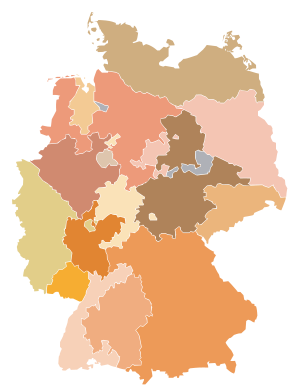 Member churches of the Protestant Church in Germany (after the fusion of the Evangelical churches of Mecklenburg, North Elbia and Pomerania in 2012).

The umbrella of the Evangelical Church in Germany comprises 20 regional churches, two Reformed (Calvinist), seven Lutheran and 11 united (Lutheran-Reformed) bodies. These bodies are termed Landeskirchen ("Regional Churches")[20] though in most cases, their territories do not correspond to the current federal states, but rather to former duchies, electorates and provinces or mergers thereof.

The Moravian Church and the Federation of Evangelical Reformed Congregations are associate members.