The three evangelical counsels or counsels of perfection in Christianity are chastity, poverty (or perfect charity), and obedience.[1] As Jesus of Nazareth stated in the Canonical gospels,[2] they are counsels for those who desire to become "perfect" (τελειος, cf. Matthew 19:21, see also Strong's G5046 and Imitatio dei). The Catholic Church interprets this to mean that they are not binding upon all and hence not necessary conditions to attain eternal life (heaven). Rather they are "acts of supererogation" that exceed the minimum stipulated in the Commandments in the Bible.[3] Christians that have made a public profession to order their life by the evangelical counsels, and confirmed this by a public religious vow before their competent church authority (the act of religious commitment called "profession"), are recognised as members of the consecrated life.

There are early forms of religious vows in the Christian monastic traditions. The Rule of Saint Benedict (ch. 58.17) stipulates for its adherents what has come to be known as the "Benedictine vow", which to this day is made by the candidates joining Benedictine communities, promising "stability, conversion of manners and obedience". Religious vows in the form of the three evangelical counsels of chastity, poverty, and obedience were first made in the twelfth century by Francis of Assisi and his followers, the first of the mendicant orders. These vows are made now by the members of all Roman Catholic religious institutes founded subsequently (cf. Code of Canon Law, can. 573) and constitute the basis of their other regulations of their life and conduct.

Members of religious institutes confirm their intention to observe the evangelical counsels by making a "public" vow,[4] that is, a vow that the superior of the religious institute accepts in the name of the Church.[5] Outside the consecrated life Christians are free to make a private vow to observe one or more of the evangelical counsels; but a "private" vow does not have the same binding and other effects in church law as a "public" vow and does not bestow the spiritual benefits that spiritual teachers such as Dom Columba Marmion (cf. Christ the Ideal of the Monk, ch. VI) attribute to the religious "profession". 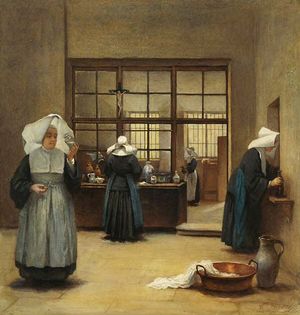 A young man in the Gospel asked what he should do to obtain eternal life, and Jesus told him to "keep the commandments", but when the young man pressed further, Christ told him: "If thou wilt be perfect, go sell what thou hast, and give to the poor". (It is from this passage that the term "counsel of perfection" comes.) Again in the Gospels, Jesus speaks of "eunuchs who have made themselves eunuchs for the kingdom of heaven", and added "He that can receive it, let him receive it". St. Paul presses home the duty incumbent on all Christians of keeping free from all sins of the flesh, and of fulfilling the obligations of the married state, if they have taken those obligations upon themselves, but also gives his "counsel" in favor of the unmarried state and of perfect chastity (Celibacy), on the ground that it is thus more possible to serve God with an undivided allegiance.

Indeed, the danger in the Early Church, even in Apostolic times, was not that the "counsels" would be neglected or denied, but that they should be exalted into commands of universal obligation, "forbidding to marry" (1 Timothy 4:3), and imposing poverty as a duty on all (see also Legalism (theology)). 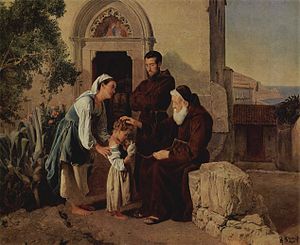 These counsels have been analyzed as a way to keep the world from distracting the soul, on the grounds that the principal good things of this world easily divide themselves into three classes.[citation needed] There are the riches which make life easy and pleasant, there are the pleasures of the flesh which appeal to the appetites, and, lastly, there are honors and positions of authority which delight the self-love of the individual. These three matters, in themselves often innocent and not forbidden to the devout Christian, may yet, even when no kind of sin is involved, hold back the soul from its true aim and vocation, and delay it from becoming entirely conformed to the will of God. It is, therefore, the object of the three counsels of perfection to free the soul from these hindrances. The love of riches is opposed by the counsel of poverty, the pleasures of the flesh (even the lawful pleasures of holy matrimony) are excluded by the counsel of chastity, while the desire for worldly power and honor is met by the counsel of holy obedience. Abstinence from unlawful indulgence in any of these directions is expected of all Christians as a matter of precept. The further voluntary abstinence from what is in itself lawful is the subject of the counsels, and such abstinence is not in itself meritorious, but only becomes so when it is done for the sake of Christ, and in order to be more free to serve Him.

The Catholic Encyclopedia article ends with the following summary: