From Infogalactic: the planetary knowledge core
Jump to: navigation, search
This article is about use of the expression by Ronald Reagan. For other uses, see Evil empire (disambiguation). 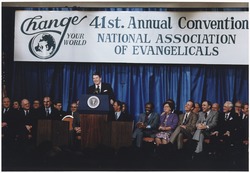 The phrase evil empire was first applied to the Soviet Union in 1983 by U.S. President Ronald Reagan, who took an aggressive, hard-line stance that favored matching and exceeding the Soviet Union's strategic and global military capabilities, in calling for a rollback strategy that would, in his words, "write the final pages of the history of the Soviet Union." The characterization demeaned the Soviet Union and angered Soviet leaders. According to G. Thomas Goodnight, the "Evil Empire" speech along with the "Zero Option" and "Star Wars" speeches represented the rhetorical side of the United States' escalation of the Cold War. In the former, Reagan depicted nuclear warfare as an extension of the "age old struggle between good and evil",[1] while arguing that an increased nuclear inventory as well as progress in science and technology were necessary to prevent global conflict. Through these speeches, the Reagan administration used rhetoric to reshape public knowledge about and attitudes toward nuclear warfare.[1]

Reagan's chief speechwriter at the time, Anthony R. Dolan, reportedly coined the phrase for Reagan's use.[2] Some sources refer to the June 1982 speech before the British House of Commons as the "Evil Empire" speech,[3] but while Reagan referred twice to totalitarianism in his London speech, the exact phrase "evil empire" did not appear in any speech until later in his Presidency.[citation needed] Rather, the phrase "ash heap of history" appeared in this speech, used by Reagan to predict what he saw as the inevitable failure and collapse of global communism. This latter phrase was originally coined by Bolshevik revolutionary Leon Trotsky in November 1917, using it against his opponents (the Mensheviks) and suggesting that Communism was the future.[4]

Reagan's March 8, 1983 speech to the National Association of Evangelicals in Orlando, Florida, is his first recorded use of the phrase "evil empire". Reagan said:[5][6]

Yes, let us pray for the salvation of all of those who live in that totalitarian darkness—pray they will discover the joy of knowing God. But until they do, let us be aware that while they preach the supremacy of the State, declare its omnipotence over individual man, and predict its eventual domination of all peoples on the earth, they are the focus of evil in the modern world.... So, in your discussions of the nuclear freeze proposals, I urge you to beware the temptation of pride—the temptation of blithely..uh..declaring yourselves above it all and label both sides equally at fault, to ignore the facts of history and the aggressive impulses of an evil empire, to simply call the arms race a giant misunderstanding and thereby remove yourself from the struggle between right and wrong and good and evil.

In the "evil empire" speech, which also dealt with domestic issues, Reagan made the case for deploying NATO nuclear-armed missiles in Western Europe as a response to the Soviets installing new nuclear armed missiles in Eastern Europe. Eventually, the NATO missiles were set up and used as bargaining chips in arms talks with Soviet leader Mikhail Gorbachev, who took office in 1985. In 1987, Reagan and Gorbachev agreed to go further than a nuclear freeze. In an Atomic Age first, they agreed to reduce nuclear arsenals. Intermediate- and shorter-range nuclear missiles were eliminated.

In 1987, American conservative Michael Johns compiled a list of what he called "Soviet Crimes", echoing Reagan by claiming "what we face today in Soviet Communism is, indeed, an evil empire".[7]

The Soviet Union, for its part, alleged that the United States was an imperialist superpower seeking to dominate the entire world, and that the Soviet Union was fighting against it in the name of humanity. In Moscow, the Soviet press agency TASS said the "evil empire" words demonstrated that the Reagan administration "can think only in terms of confrontation and bellicose, lunatic anti-communism."[8]

During his second term in office, in May–June 1988, more than five years after using the term "evil empire", Reagan visited the new reformist General Secretary of the Soviet Union, Mikhail Gorbachev, in Moscow. When asked by a reporter whether he still thought the Soviet Union was an "evil empire", Reagan responded that he no longer did, and that when he used the term it was a "different era"; that is, the period before Gorbachev's perestroika and glasnost reforms. Still, Reagan remained a critic of the Soviet regime for its absence of democratic institutions.

Historians such as Yale University's John Lewis Gaddis have grown more favorable towards the use and influence of the phrase "evil empire" in describing the Soviet Union. In The Cold War Gaddis argues that, in their use of the phrase "evil empire", Reagan and his anti-Communist political allies were effective in breaking the détente tradition, thus laying the groundwork for the ultimate collapse of the Soviet Union.[citation needed]

The term is also used in recent times for the United States itself. Pat Buchanan argues that Russia's President Vladimir Putin is implying that the US under the Obama administration may deserve the title in the 21st century with Putin's rhetoric in recent years. Buchanan says that Putin has an argument due to American views on abortion and same-sex marriage, pornography, promiscuity and the general panoply of Hollywood values.[9] Buchanan served as White House Communications Director for Reagan from 1985 to 1987.