Executive Office of the President

The Executive Office of the President (EOPOTUS or EOP) consists of the immediate staff of the current President of the United States and multiple levels of support staff reporting to the President. The EOP is headed by the White House Chief of Staff, currently Denis McDonough. The size of the White House staff has increased dramatically since 1939, and has grown to include an array of policy experts in various fields.

In 1939, during Franklin D. Roosevelt's second term in office, the foundations of the modern White House staff were created. Based on the recommendations of a presidentially commissioned panel of political science and public administration experts that were known as the Brownlow Committee, Roosevelt was able to get Congress to approve the Reorganization Act of 1939. The Act led to Reorganization Plan No. 1,[1] which created the EOP,[2] which reported directly to the president. The EOP encompassed two subunits at its outset: the White House Office (WHO) and the Bureau of the Budget, the predecessor to today's Office of Management and Budget, which had been created in 1921 and originally located in the Treasury Department. It absorbed most of the functions of the National Emergency Council.[3] Initially, the new staff system appeared more ambitious on paper than in practice; the increase in the size of the staff was quite modest at the start. But it laid the groundwork for the large and organizationally complex White House staff that would emerge during the presidencies of Roosevelt's successors.[4] 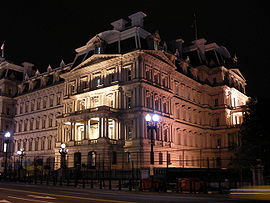 Roosevelt's efforts are also notable in contrast to those of his predecessors in office. During the nineteenth century, presidents had few staff resources. Thomas Jefferson had one messenger and one secretary at his disposal, both of whose salaries were paid by the president personally. It was not until 1857 that Congress appropriated money ($2,500) for the hiring of one clerk. By Ulysses S. Grant's presidency (1869–1877), the staff had grown to three. By 1900, the White House staff included one "secretary to the president" (then the title of the president's chief aide), two assistant secretaries, two executive clerks, a stenographer, and seven other office personnel. Under Warren G. Harding, the size of the staff expanded to thirty-one, although most were clerical positions. During Herbert Hoover's presidency, two additional secretaries to the president were added by Congress, one of whom Hoover designated as his Press Secretary. From 1933 to 1939, even as he greatly expanded the scope of the federal government's policies and powers in response to the Great Depression, Roosevelt muddled through: his "brains trust" of top advisers, although working directly for the President, often were appointed to vacant positions in agencies and departments, whence they drew their salaries since the White House lacked statutory or budgetary authority to create new staff positions.

From 1939 through the present, the situation changed dramatically. New units within the EOP were created, some by statute, some by executive order of the president. Among the most important are the Council of Economic Advisers (1946), the National Security Council and its staff (1947), the Office of the U.S. Trade Representative (1963), the Council on Environmental Quality (1970), the Office of Science and Technology Policy (1976), the Office of Administration (1977), and the Office of National Drug Control Policy (1989). Under George W. Bush, additional units were added, such as the Office of Homeland Security (2001), which later became a Cabinet department, and the Office of Faith-based and Community Initiatives (2001). Precise estimates as to the size and budget of the EOP are difficult to come by. Many people who work on the staff are "detailed" from other federal departments and agencies, and budgetary expenses are often charged elsewhere, for example Defense Department staff for the White House Military Office. Ballpark estimates indicate some 2,000 to 2,500 persons serve in EOP staff positions with policy-making responsibilities, with a budget of $300 to $400 million (George W. Bush's budget request for Fiscal Year 2005 was for $341 million in support of 1,850 personnel).[5]

Very few EOP (Executive Office of the President) officials are required to be confirmed by the U.S. Senate, although there are a handful of exceptions to this rule (e.g., the Director of the Office of Management and Budget, the Chair and members of the Council of Economic Advisers, and the United States Trade Representative). The core White House Staff appointments do not require Senate approval. The staff of the Executive Office of the President is managed by the White House Chief of Staff.

The information in the following table is current as of April 12, 2014.[6] Only principal executives are listed; for subordinate officers, see individual office pages.