An explosively formed penetrator (EFP), also known as an explosively formed projectile, a self-forging warhead, or a self-forging fragment, is a special type of shaped charge designed to penetrate armour effectively at standoff distances. As the name suggests, the effect of the explosive charge is to deform a metal plate into a slug or rod shape and accelerate it toward a target. They were first developed during WWII.[1]

Formation of an EFP 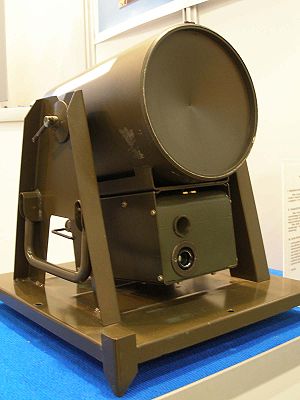 MPB mine showing the face of its explosively formed penetrator

A conventional shaped charge generally has a conical metal liner that projects a hypervelocity jet of metal able to penetrate steel armour to great depths; in travel over some distance the jet breaks up along its length into particles that drift out of alignment, greatly diminishing its effectiveness at a distance.

An EFP, on the other hand, has a liner face in the shape of a shallow dish. The force of the blast molds the liner into any of a number of shapes, depending on the shape of the plate and how the explosive is detonated.[2] Some sophisticated EFP warheads have multiple detonators that can be fired in different arrangements causing different types of waveform in the explosive, resulting in either a long-rod penetrator, an aerodynamic slug projectile, or multiple high-velocity fragments. A less sophisticated approach for changing the formation of an EFP is the use of wire-mesh in front of the liner: with the mesh in place the liner fragments into multiple penetrators.[3]

In addition to single-penetrator EFPs (also called single EFPs or SEFPs), there are EFP warheads whose liners are designed to produce more than one penetrator; these are known as multiple EFPs, or MEFPs. The liner of an MEFP generally comprises a number of dimples that intersect each other at sharp angles. Upon detonation the liner fragments along these intersections to form up to dozens of small, generally spheroidal projectiles, producing an effect similar to that of a shotgun. The pattern of impacts on target can be finely controlled based on the design of the liner and the manner in which the explosive charge is detonated. A nuclear-driven MEFP was apparently proposed by a member of the JASON group in 1966 for terminal ballistic missile defense.[4][5] A related device was the proposed nuclear pulse propulsion unit for Project Orion.

The (single) EFP generally remains intact and is therefore able to penetrate armour at a long range, delivering a wide spray of fragments of liner material and vehicle armour backspall into the vehicle's interior, injuring its crew and damaging other systems.[6]

The penetration is proportional to the density of the liner metal; tantalum 16.654 g/cm3, copper 8.960 g/cm3, iron 7.874 g/cm3. Tantalum is preferable in delivery systems that have limitations in size, like the SADARM, which is delivered by a howitzer. For other weapon systems where the size does not matter, a copper liner of double the calibre is used.

Extensive research is going on in the zone between jetting charges and EFPs, which combines the advantages of both types, resulting in very long stretched-rod EFPs for short-to-medium distances (because of the lack of aerostability) with improved penetration capability.

EFPs have been adopted as warheads in a number of weapon systems, including the CBU-97 and BLU-108 air bombs (with the Skeet submunition), the M303 Special Operations Forces demolition kit, the M2/M4 Selectable Lightweight Attack Munition (SLAM), the SADARM submunition, the Low Cost Autonomous Attack System, and the TOW-2B anti-tank missile.

An EFP eight inches in diameter threw a seven-pound copper slug at Mach 6, or 2,000 meters per second. (A .50-caliber bullet, among the most devastating projectiles on the battlefield, weighs less than two ounces and has a muzzle velocity of 900 meters per second.)—Rick Atkinson, The Washington Post[8]

Use in improvised explosive devices 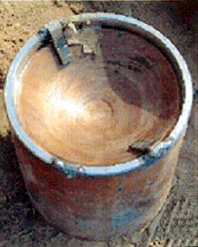 EFPs have been used in improvised explosive devices against armoured cars, for example[9] in the 1989 assassination of the German banker Alfred Herrhausen (attributed to the Red Army Faction),[10] and by Hezbollah in the 1990s.[11] A recent development is their widespread use in IEDs by insurgents in Iraq against coalition vehicles.[12]

The charges are generally cylindrical, fabricated from commonly available metal pipe, with the forward end closed by a concave copper or steel disk-shaped liner to create a shaped charge. Explosive is loaded behind the metal liner to fill the pipe. Upon detonation, the explosive projects the liner to form a projectile.

The effects of traditional explosions like blast-forces and metal fragments seldom disable armored vehicles, but the explosively formed solid copper penetrator is quite lethal —even to the new generation of mine-resistant vehicles (which are made to withstand an anti-tank mine), and many tanks.[13]

Often mounted on crash barriers at window level, they are placed along roadsides at choke points where vehicles must slow down, such as intersections and junctions. This gives the operator time to judge the moment to fire, when the vehicle is moving more slowly.[14]

Detonation is controlled by cable, radio control, TV or IR remote controls, or remote arming with a passive infrared sensor, or via a pair of ordinary cell phones. EFPs can be deployed singly, in pairs, or in arrays, depending on the tactical situation.

At close standoff distance there is no need for the cone-tailed projectiles' aerodynamic stability, which means that the liner can be simplified.

The SIM-EFP is a construction that fits in between the military linear cutting charge (see shaped charge) and the platter charge (see improvised explosive device). The main difference is how much the rectangular liner plate is bent.

SIM-EFPs are built from simple cut and bent steel bars, side by side, with explosives attached. Upon explosion it creates multiple projectiles spread out along the vehicles' length, which makes it more probable that the enemy troops inside the vehicle are hit. The construction also allows for longer timing errors, and makes it easier to hit fast moving vehicles.

The SIM-EFP is a modified version of the platter charge, but the projectiles are better optimized for armour penetration instead of demolition, and spread out perfectly for effective killing of armoured vehicles (optimized for long projectiles instead of a broad flat projectile).

The simplified EFP design also makes it easier for small groups of motivated individuals to build big EFPs that can penetrate a heavy battle tank or stationary high-value targets of virtually any sort.

In Northern Ireland similar devices have been discovered that were developed by dissident Republican groups for intended use against the police.[17][18]

The spacecraft Hayabusa 2 will carry a Small Carry-on Impactor (SCI). It will be dropped off Hayabusa 2 on to an asteroid and detonated. The explosion will form a copper explosively formed penetrator hitting the asteroid with a velocity of 2 km/s. The crater created by the impact will be a target for further observations by the onboard instruments. The shaped charge will consist of 4.5 kg of plasticized HMX and a 2.5 kg copper liner.[19]