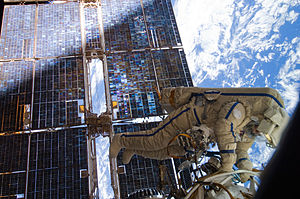 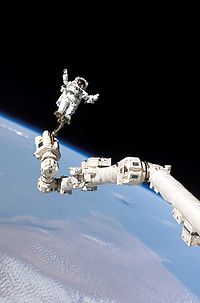 Stephen Robinson riding the robotic arm during STS-114, doing a first in-flight repair of the Space Shuttle. The landmass in the backdrop is the Bari region of Somalia.

Extravehicular activity (EVA) is any activity done by an astronaut or cosmonaut outside a spacecraft beyond the Earth's appreciable atmosphere. The term most commonly applies to a spacewalk made outside a craft orbiting Earth (such as the International Space Station), but also has applied to lunar surface exploration (commonly known as moonwalks) performed by six pairs of American astronauts in the Apollo program from 1969 to 1972. On each of the last three of these missions, astronauts also performed deep-space EVAs on the return to Earth, to retrieve film canisters from the outside of the spacecraft. Astronauts also used EVA in 1973 to repair launch damage to Skylab, the United States' first space station.

A "Stand-up" EVA (SEVA) is where the astronaut does not fully leave a spacecraft, but is completely reliant on the spacesuit for environmental support.[1] Its name derives from the astronaut "standing up" in the open hatch, usually to film or assist a spacewalking astronaut.

EVAs may be either tethered (the astronaut is connected to the spacecraft; oxygen and electrical power can be supplied through an umbilical cable; no propulsion is needed to return to the spacecraft), or untethered. Untethered spacewalks were only performed on three missions in 1984 using the Manned Maneuvering Unit (MMU), and on a flight test in 1994 of the Simplified Aid for EVA Rescue (SAFER). A SAFER is a safety device worn on tethered U.S. EVAs, since the capability of returning to the spacecraft is essential.

Russia, the United States and China have demonstrated the capability to conduct an EVA.

NASA planners invented the term extravehicular activity (abbreviated with the acronym EVA) in the early 1960s for the Apollo program to land men on the Moon, because the astronauts would leave the spacecraft to collect lunar material samples and deploy scientific experiments. To support this, and other Apollo objectives, the Gemini program was spun off to develop the capability for astronauts to work outside a two-man Earth orbiting spacecraft. However, the Soviet Union was fiercely competitive in holding the early lead it had gained in manned spaceflight, so the Soviet Communist Party, led by Nikita Khrushchev, ordered the conversion of its single-pilot Vostok capsule into a two- or three-person craft named Voskhod, in order to compete with Gemini and Apollo.[2] The Soviets were able to launch two Voskhod capsules before U.S. was able to launch its first manned Gemini.

The Voskhod's avionics required cooling by cabin air to prevent overheating, therefore an airlock was required for the spacewalking cosmonaut to exit and re-enter the cabin while it remained pressurized. By contrast, the Gemini avionics did not require air cooling, allowing the spacewalking astronaut to exit and re-enter the depressurized cabin through an open hatch. Because of this, the American and Soviet space programs developed different definitions for the duration of an EVA. The Soviet (now Russian) definition begins when the outer airlock hatch is open and the cosmonaut is in vacuum. An American EVA began when the astronaut had at least his head outside the spacecraft.[3] The USA has changed its EVA definition since.[citation needed]

As they had with the first satellite and first man in space, the Soviets again stunned the world on March 18, 1965 with the first spacewalk (and the first EVA) performed by Alexey Leonov from the Voskhod 2 spacecraft, for 12 minutes outside the spacecraft. Leonov had no means to control his motion other than pulling on his 50.7-foot (15.5 m) tether. After the flight, he claimed this was easy, but his space suit ballooned from its internal pressure against the vacuum of space, stiffening so much that he could not activate the shutter on his chest-mounted camera.[4]

At the end of his space walk, the suit stiffening caused a more serious problem: Leonov had to re-enter the capsule through the inflatable cloth airlock, 3.96 feet (1.21 m) in diameter and 8.25 feet (2.51 m) long. After his spacewalk, he improperly entered the airlock head-first and got stuck sideways. He could not get back in without reducing the pressure in his suit, risking "the bends". This added another 12 minutes to his time in vacuum, and he was overheated by 1.8 °C (3.2 °F) from the exertion. It would be almost four years before the Soviets tried another EVA. They misrepresented to the press how difficult Leonov found it to work in weightlessness and concealed the problems encountered until after the end of the Cold War.[4][5] 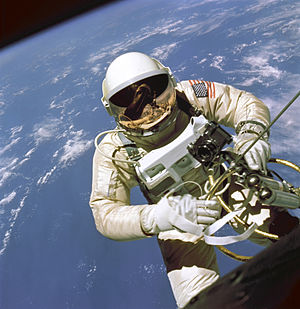 The first American spacewalk was performed on June 3, 1965, by Edward H. White, II from the second manned Gemini flight, Gemini 4, for 21 minutes, on a 25-foot (7.6 m) tether. White was the first to control his motion in space with a Hand-Held Maneuvering Unit, which worked well but only carried enough propellant for 20 seconds. White found his tether useful for limiting his distance from the spacecraft but difficult to use for moving around, contrary to Leonov's claim.[4] However, a defect in the capsule's hatch latching mechanism caused difficulties opening and closing the hatch, which delayed the start of the EVA and put White and his crewmate at risk of not getting back to Earth alive.[6]

No EVAs were planned on the next three Gemini flights. The next EVA was planned to be made by David Scott on Gemini 8, but that mission had to be aborted due to a critical spacecraft malfunction before the EVA could be conducted. Astronauts on the next three Gemini flights (Eugene Cernan, Michael Collins, and Richard Gordon), performed several EVAs, but none was able to successfully work for long periods outside the spacecraft without tiring and overheating.

Finally, on November 13, 1966, Edwin "Buzz" Aldrin became the first to successfully work in space without tiring, on the Gemini 12 last flight. Aldrin worked outside the spacecraft for 2 hours and 6 minutes, in addition to two stand-up EVAs in the spacecraft hatch for an additional 3 hours and 24 minutes. Aldrin's interest in scuba diving inspired the use of underwater EVA training to simulate weightlessness, which has been used ever since to allow astronauts to practice techniques of avoiding wasted muscle energy.

On January 16, 1969, the Soviet Union achieved the first EVA crew transfer from one spacecraft to another when Aleksei Yeliseyev and Yevgeny Khrunov transferred from Soyuz 5 to Soyuz 4, which were docked together. This was the second Soviet EVA, and it would be almost another nine years before the Soviets performed their third.[4] 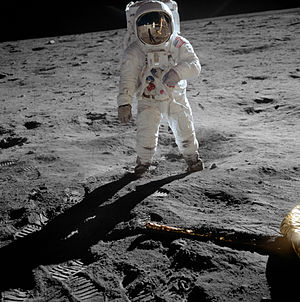 Charles Duke with a hammer on the lunar surface.

The first EVA in deep space was made on August 5, 1971, by American Al Worden, to retrieve a film and data recording canister from the Apollo 15 Service Module on the return trip from the Moon. Worden was assisted by James Irwin, doing a standup EVA in the Command Module hatch. This was repeated by Ken Mattingly and Charles Duke on Apollo 16 and by Ronald Evans and Harrison Schmitt on Apollo 17.[4]

The first EVA repairs of a spacecraft were made by Charles "Pete" Conrad, Joseph Kerwin, and Paul J. Weitz on May 26, June 7, and June 19, 1973, on the Skylab 2 mission. They rescued the functionality of the launch-damaged Skylab space station by freeing a stuck solar panel, deploying a solar heating shield, and freeing a stuck circuit breaker relay. The Skylab 2 crew made three EVAs, and a total of ten EVAs were made by the three Skylab crews.[4] They found that activities in weightlessness required about 2 1/2 times the duration as on Earth because many astronauts suffered spacesickness early in their flights.[7]

After Skylab, no more EVAs were made by the United States until the advent of the Space Shuttle program in the early 1980s. In this period, the Soviets resumed EVAs, making four from the Salyut 6 and Salyut 7 space stations between December 20, 1977, and July 30, 1982.[4]

When the United States resumed EVAs on April 7, 1983, astronauts started using an Extravehicular Mobility Unit (EMU) for self-contained life support independent of the spacecraft on Shuttle mission. STS-6 was the first Space Shuttle mission during which a spacewalk was conducted. Also, for the first time, American astronauts used an airlock to enter and exit the spacecraft like the Soviets. Accordingly, the American definition of EVA start time was redefined to when the astronaut switches the EMU to battery power.[citation needed]

The US Post Office issued the Accomplishments in Space stamp in 1967. Along with astronaut Ed White, the issue depicts the Gemini IV spacecraft in orbit.

NASA "spacewalkers" during the space shuttle program were designated as EV-1, EV-2, EV-3 and EV-4 (assigned to mission specialists for each mission, if applicable).[14][15]

For EVAs from the International Space Station, NASA now routinely employs a camp out procedure to reduce the risk of decompression sickness.[16] This was first tested by the Expedition 12 crew. During a camp out, astronauts sleep overnight in the airlock prior to an EVA, lowering the air pressure to 10.2 psi (70 kPa), compared to the normal station pressure of 14.7 psi (101 kPa).[16] Spending a night at the lower air pressure helps flush nitrogen from the body, thereby preventing "the bends".[17][18]