From Infogalactic: the planetary knowledge core
(Redirected from Extreme sports)
Jump to: navigation, search
This article is about various extreme sports. For the TV channel, see Extreme Sports Channel.
Not to be confused with Extreme Spots.
File:Windsurf-wipeout.jpg
Wave jumping wipeout. While attempting a forward loop in overpowered storm conditions off the coast of Cantabria, Spain, windsurfer Justin Wheeler gets catapulted into a high double flip. 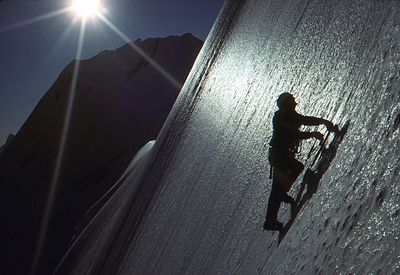 A solo ascent of a steep ice slope

The definition of an extreme sport is not exact and the origin of the term is unclear, but it gained popularity in the 1990s when it was picked up by marketing companies to promote the X Games and when the Extreme Sports Channel and Extreme.com launched.

While use of the term "extreme sport" has spread far and wide to describe a multitude of different activities, exactly which sports are considered 'extreme' is debatable. There are however several characteristics common to most extreme sports.[4] While not the exclusive domain of youth, extreme sports tend to have a younger-than-average target demographic. Extreme sports are rarely sanctioned by schools.[citation needed] Extreme sports tend to be more solitary than traditional sports[5] (rafting and paintballing are notable exceptions, as they are done in teams). In addition, beginning extreme athletes tend to work on their craft without the guidance of a coach (though some may hire a coach later).

Activities categorized by media as extreme sports differ from traditional sports due to the higher number of inherently uncontrollable variables. These environmental variables are frequently weather and terrain related, including wind, snow, water and mountains. Because these natural phenomena cannot be controlled, they inevitably affect the outcome of the given activity or event.

In a traditional sporting event, athletes compete against each other under controlled circumstances. While it is possible to create a controlled sporting event such as X Games, there are environmental variables that cannot be held constant for all athletes. Examples include changing snow conditions for snowboarders, rock and ice quality for climbers, and wave height and shape for surfers.

Whilst traditional sporting judgment criteria may be adopted when assessing performance (distance, time, score, etc.), extreme sports performers are often evaluated on more subjective and aesthetic criteria.[6] This results in a tendency to reject unified judging methods, with different sports employing their own ideals[7] and indeed having the ability to evolve their assessment standards with new trends or developments in the sports.

While the exact definition and what is included as extreme sport is debatable, some attempted to make classification for extreme sports.[8]

One argument is that to qualify as an "extreme sport" both expression terms need to be fulfilled;

Along this definition, an activity such as bunjee jumping may not qualify as no skill or physical ability is required to execute a good jump (i.e., avoid poor execution). A passenger in a canyon jet boat ride will not fulfill the requirements, as the skill required pertains to the pilot, not the passengers. "Thrill seeking" might in these cases be a more suitable qualification than "extreme sport".

Extreme sports may be subdivided into:

These sports require the use of some kind of "vehicle" (a ski, parachute, wingsuit, surfboard, a motocross bike etc.). They can be further subdivided into gliding (over air, snow, ice or water) sports ("sports de glisse" in French) and rolling sports. Another subdivision can be made along motorized and non motorized vehicle sports, resulting in the following matrix;

The origin of the divergence of the term "extreme sports" from "sports" may date to the 1950s in the appearance of a phrase usually, but wrongly, attributed to Ernest Hemingway.[9] The phrase is

There are only three sports: bullfighting, motor racing, and mountaineering; all the rest are merely games.

The implication of the phrase was that the word "sport" defined an activity in which one might be killed. The other activities being termed "games". The phrase may have been invented by either writer Barnaby Conrad or automotive author Ken Purdy.[9]

The Dangerous Sports Club of Oxford University, England was founded by David Kirke, Chris Baker, Ed Hulton and Alan Weston. They first came to wide public attention by inventing modern day bungee jumping, by making the first modern jumps on 1 April 1979, from the Clifton Suspension Bridge, Bristol, England. They followed the Clifton Bridge effort with a jump from the Golden Gate Bridge in San Francisco, California (including the first female bungee jump by Jane Wilmot), and with a televised leap from the Royal Gorge Suspension Bridge in Colorado, sponsored by and televised on the popular American television program That's Incredible! Bungee jumping was treated as a novelty for a few years, then became a craze for young people, and is now an established industry for thrill seekers. The Club also pioneered a surrealist form of skiing, holding three events at St. Moritz, Switzerland, in which competitors were required to devise a sculpture mounted on skis and ride it down a mountain. The event reached its limits when the Club arrived in St. Moritz with a London double-decker bus, wanting to send it down the ski slopes, and the Swiss resort managers refused.

Other Club activities included expedition hang gliding from active volcanoes; the launching of giant (60 ft) plastic spheres with pilots suspended in the centre (zorbing); microlight flying; and BASE jumping (in the early days of this sport).

In recent decades the term extreme sport was further promoted after the Extreme Sports Channel, Extreme.com launched and then the X Games, a multi-sport event was created and developed by ESPN.[10][11] The first X Games (known as 1995 Extreme Games) were held in Newport, Providence, Mount Snow, and Vermont in the United States.[12][13] 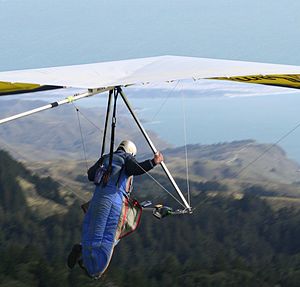 Some contend[14] that the distinction between an extreme sport and a conventional one has as much to do with marketing as with the level of danger involved or the adrenaline generated. For example, rugby union is both dangerous and adrenaline-inducing but is not considered an extreme sport due to its traditional image, and because it does not involve high speed or an intention to perform stunts (the aesthetic criteria mentioned above) and also it does not have changing environmental variables for the athletes. Demolition derby racing, predominantly an adult sport, is not thought of as 'extreme' while BMX racing, a youth sport, is.[citation needed]

One common aspect of an extreme sport is a counter-cultural aura — a rejection of authority and of the status quo by disaffected youth. Some youth of Generation Y have seized upon activities which they can claim as their own, and have begun rejecting more traditional sports in increasing numbers.[5] 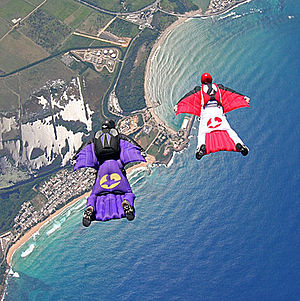 Wingsuit flying is a recent activity. 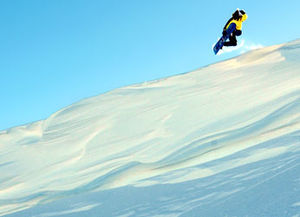 Snowboarder drops off a cornice.

A feature of such activities in the view of some is their alleged capacity to induce an adrenaline rush in participants.[15] However, the medical view is that the rush or high associated with the activity is not due to adrenaline being released as a response to fear, but due to increased levels of dopamine, endorphins and serotonin because of the high level of physical exertion.[16] Furthermore, a recent study suggests that the link to adrenaline and 'true' extreme sports is tentative.[17] The study defined 'true' extreme sports as a leisure or recreation activity where the most likely outcome of a mismanaged accident or mistake was death. This definition was designed to separate the marketing hype from the activity.

Eric Brymer[18] also found that the potential of various extraordinary human experiences, many of which parallel those found in activities such as meditation, was an important part of the extreme sport experience. Those experience put the participants outside their comfort zone and are often done in conjunction with adventure travel.

Some of the sports have existed for decades and their proponents span generations, some going on to become well known personalities. Rock climbing and ice climbing have spawned publicly recognizable names such as Edmund Hillary, Chris Bonington, Wolfgang Güllich and more recently Joe Simpson. Another example is surfing, invented centuries ago by the inhabitants of Hawaii.

Extreme sports by their nature can be extremely dangerous, conducive to fatalities, near-fatalities and other serious injuries, and sometimes consist in treading along the brink of death. This imminent and inherent danger in these sports has been considered a somewhat unnecessary part of its appeal,[19] which is partially a result of pressure for athletes to make more money and provide maximum entertainment.[20]

Extreme sports and the disabled community

Many persons with various physical disabilities participate in extreme sports. Nonprofit organizations such as Adaptive Action Sports seek to increase awareness of the participation in action sports by members of the disabled community, as well as increase access to the adaptive technologies that make participation possible and to competitions such as The X Games.[21][22]