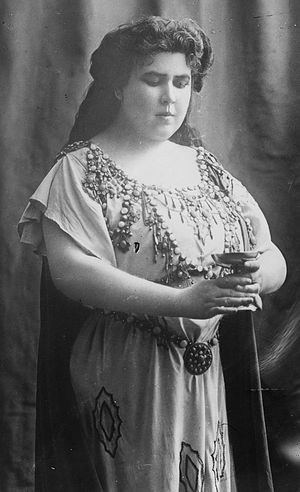 Félia Litvinne (October 11, 1860, Saint Petersburg – October 12, 1936, Paris) was a Russian-born, French-based dramatic soprano. She was particularly associated with Wagnerian roles, although she also sang a wide range of parts by other opera composers.

Born in Russia as Françoise Jeanne Schutz into a family of German and French Canadian origin[1] (her mother was born in the Province of Quebec), she came to Paris to study with Barthe-Banderali, Pauline Viardot and Victor Maurel.[2] She made her stage debut at the Théâtre-Italien in 1883, as Amelia in Verdi's Simon Boccanegra, as a last-minute replacement for Fidès Devriès.[3] Shortly afterwards, she made her official debut as Elvira in Ernani (also by Verdi).

Litvinne's career rapidly became international in scope. During the course of the next three decades she appeared at the Academy of Music in New York, at the Paris Opera, at La Scala in Milan, at the Rome Opera, at La Fenice in Venice, at the Royal Opera House, Covent Garden, in London and at the Théâtre de la Monnaie in Brussels.[4] Tsarist Russia's two main cities, Moscow and Saint Petersburg, experienced her vocal artistry as well.

Livinne first sang in New York in 1885-1886 with the Mapleson Company. She made her Metropolitan Opera debut in that city on November 25, 1896, as Valentine in Meyerbeer's grandest work, Les Huguenots. She sang at the Met for only one season, however. Her other roles there included Verdi's Aida, Mozart's Donna Anna, Massenet's Chimène, Meyerbeer's Sélika, and Wagner's Brünnhilde and Isolde.

Paris became Litvinne's base. She took part in the premieres of three works by Camille Saint-Saëns, Hélène, L'ancêtre and Déjanire, as well as of Camille Erlanger's Bacchus triomphant. Livinne also won acclaim for her splendid singing in revivals of two 18th-century operas by Gluck, namely Alceste and Armide.

In 1915, she sang Aida at Monte Carlo opposite Enrico Caruso. Her last operatic appearances were at Vichy in 1919 but she continued giving recitals until 1924. In retirement, she taught at the American Conservatory in Fontainebleau. Among her pupils were the sopranos Nina Koshetz and Germaine Lubin. She published a book of Conseils et exercices in 1924 while her autobiography, Ma vie et mon art, was released in 1933. She died in Paris three years later, just after her 76th birthday.

Litvinne was regarded widely as being one of the greatest dramatic sopranos of the late 19th century and the early 20th century. She possessed an excellent technique and a strong, flexible and resonant voice. Her low and middle registers had a mezzo-soprano like coloration and were particularly impressive but her top notes did not always ring out with total freedom, if her records are any guide. Litvinne was not famous in her lifetime as a singing-actress but she commanded a stately stage presence.

Using an Archéophone for the transcription, the 35 surviving records of Litvinne have been released complete on CD by Marston Records (52049-2). This release also contains extensive liner notes dealing with her career and voice.[5]