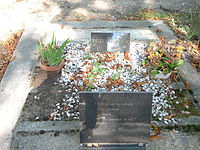 (listen) (help·info); April 30, 1930 – August 29, 1992) was a French psychotherapist, philosopher, semiologist, and militant. He founded both schizoanalysis and ecosophy, and is best known for his intellectual collaborations with Gilles Deleuze, most notably Anti-Oedipus (1972) and A Thousand Plateaus (1980), the two volumes of Capitalism and Schizophrenia.

Guattari was born in Villeneuve-les-Sablons, a working-class suburb of north-west Paris, France.[1] He trained under (and was analysed by) the psychoanalyst Jacques Lacan in the early 1950s. Subsequently, he worked (until his death from a heart attack in 1992) at the experimental psychiatric clinic of La Borde under the direction of Lacan's pupil, the psychiatrist Jean Oury. La Borde was a venue for conversation among many students of philosophy, psychology, ethnology, and social work.

One particularly novel orientation developed at La Borde consisted of the suspension of the classical analyst/analysand pair in favour of an open confrontation in group therapy. In contrast to the Freudian school's individualistic style of analysis, this practice studied the dynamics of several subjects in complex interaction; it led Guattari into a broader philosophical exploration of, and political engagement with, a vast array of intellectual and cultural domains (philosophy, ethnology, linguistics, architecture, etc.).

From 1955 to 1965, Guattari edited and contributed to La Voie Communiste (Communist Way), a Trotskyist newspaper.[2] He supported anti-colonialist struggles as well as the Italian Autonomists. Guattari also took part in the G.T.P.S.I., which gathered many psychiatrists at the beginning of the sixties and created the Association of Institutional Psychotherapy in November 1965. It was at the same time that he founded, along with other militants, the F.G.E.R.I. (Federation of Groups for Institutional Study & Research) and its review Recherche (Research), working on philosophy, mathematics, psychoanalysis, education, architecture, ethnology, etc. The F.G.E.R.I. came to represent aspects of the multiple political and cultural engagements of Guattari: the Group for Young Hispanics, the Franco-Chinese Friendships (in the times of the people's communes), the opposition activities with the wars in Algeria and Vietnam, the participation in the M.N.E.F., with the U.N.E.F., the policy of the offices of psychological academic aid (B.A.P.U.), the organisation of the University Working Groups (G.T.U.), but also the reorganizations of the training courses with the Centers of Training to the Methods of Education Activities (C.E.M.E.A.) for psychiatric male nurses, as well as the formation of Friendly Male Nurses (Amicales d'infirmiers) (in 1958), the studies on architecture and the projects of construction of a day hospital of for "students and young workers".

In 1967, he appeared as one of the founders of OSARLA (Organization of solidarity and Aid to the Latin-American Revolution). In 1968, Guattari met Daniel Cohn-Bendit, Jean-Jacques Lebel, and Julian Beck. He was involved in the large-scale French protests of 1968, starting from the Movement of March 22. It was in the aftermath of 1968 that Guattari met Gilles Deleuze at the University of Vincennes and began to lay the ground-work for the soon to be infamous Anti-Oedipus (1972), which Michel Foucault described as "an introduction to the non-fascist life" in his preface to the book. In 1970, he created fr:CERFI (Center for the Study and Research of Institutional Formation), which developed the approach explored in the Recherches journal. In 1973, Guattari was tried and fined for committing an "outrage to public decency" for publishing an issue of Recherches on homosexuality.[3] In 1977, he created the CINEL for "new spaces of freedom" before joining in the 1980s the ecological movement with his "ecosophy".

In his last book, Chaosmosis (1992), Guattari returned to the question of subjectivity: "How to produce it, collect it, enrich it, reinvent it permanently in order to make it compatible with mutant Universes of value?" This concern runs through all of his works, from Psychoanalysis and Transversality (a collection of articles from 1957 to 1972), through Years of Winter (1980–1986) and Schizoanalytic Cartographies (1989), to his collaboration with Deleuze, What is Philosophy? (1991). In Chaosmosis, Guattari proposes an analysis of subjectivity in terms of four dimensions: (1) material, energetic, and semiotic fluxes; (2) concrete and abstract machinic phylums; (3) virtual universes of value; and (4) finite existential territories.[4] This scheme attempts to grasp the heterogeneity of components involved in the production of subjectivity, as Guattari understands it, which include both signifying semiotic components as well as "a-signifying semiological dimensions" (which work "in parallel or independently of" any signifiying function that they may have).[5]

In 1995, the posthumous release Chaosophy published essays and interviews concerning Guattari's work as director of the experimental La Borde clinic and his collaborations with Deleuze. The collection includes essays such as "Balance-Sheet Program for Desiring Machines," cosigned by Deleuze (with whom he coauthored Anti-Oedipus and A Thousand Plateaus), and "Everybody Wants To Be a Fascist." It provides an introduction to Guattari's theories on "schizoanalysis", a process that develops Sigmund Freud's psychoanalysis but which pursues a more experimental and collective approach towards analysis.

In 1996 another collection of Guattari's essays, lectures, and interviews, Soft Subversions, was published, which traces the development of his thought and activity throughout the 1980s ("the winter years"). His analyses of art, cinema, youth culture, economics, and power formations, develop concepts such as "micropolitics," "schizoanalysis," and "becoming-woman," which aim to liberate subjectivity and open up new horizons for political and creative resistance to the standardizing and homogenizing processes of global capitalism (which he calls "Integrated World Capitalism") in the "postmedia era."

In collaboration with Gilles Deleuze:

Note: Many of the essays found in these works have been individually translated and can be found in the English collections.