The Amkar football club was created to represent the Perm Inorganic Fertilizer Company. The club's "birthday" is 8 May 1993, although it was only registered officially on 6 December 1994. The name "Amkar" derives from a combination of parts of the Russian words "AMmiak" (ammonia) and "KARbamid (carbamide, urea) – these two substances being the main products of the plant. The team owes the choice of club colours (red and black) to its Italian trade partners from Milan, who responded to a request for help by offering equipment from AC Milan. And so the club colours became red and black.[3] The basis of the new team was made up of company employees. In 1994 Amkar, strengthened by amateur players from other city teams and a few former professionals, became champion of the city of Perm and the Perm region and also won the regional Cup. The club was officially registered on 6 December 1994 and applied to participate in the Russian football league. Amkar was included in the third league of the Russian Championship. In 1995, the team, reinforced by former players of Zvezda Perm, was second in the 6th group of the third league and qualified for the second league. In 1996, Amkar finished in third place in the central group of the second league and in 1997, the club was second in the tournament. 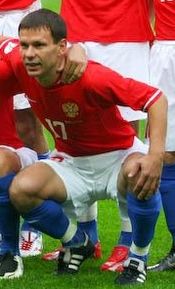 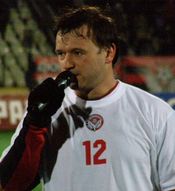 On 12 September 1998 Spartak Moscow paid a visit to Amkar for a Russian Cup tie. Spartak's previous visit to the Western Urals was in 1977 as a first division side, when they were close to a return to the top tier of domestic football. The match attracted enormous interest and the 25000 stadium was filled to capacity for the first time in its 30 year history. The match finished 1–0 in favour of Amkar. In the league "Permyaki" accumulated 93% of the possible number of points and scored 100 goals. Amkar took first place and earned the right to play in the First Division.

From 1999 to 2003, the team performed reasonably well in the First Division, finishing each year in the top six. In the 2001/02 season the club reached the semi-final of the Russian Cup but lost to CSKA Moscow 0–1. In 2003, with two matches left to play Amkar was in fourth position, one point behind Kuban Krasnodar and losing out to Tom Tomsk and Terek Grozny on the total number of wins. According to the pundits Amkar and Terek would be losers in this four-horse race but a sensational draw between Tom and Baltika Kaliningrad made the red and blacks favourites. In the final match Kuban and Terek had to play each other. In order to move up into the Premier League Amkar needed a win against Fakel Voronezh, which was duly achieved.

In the Premier League, Amkar at first performed satisfactorily, finishing 11th, 12th and 13th in 2004, 2005 and 2006 respectively. Before the first season in the Premier League Amkar was strengthened by such players as Levenets, Shutov, Leonchenko, Sirakov, Lavrik, Olexici, Ziyati, Lincar and others and their debut match was with Kuban Krasnodar away. The game ended 0–0. In the first rounds the team played well, gathering 8 points in four games with just a single defeat. In the 2004/05 season Amkar repeated their success in the Russian Cup, once more reaching the semi-finals, but losing on aggregate 0–2 to Khimki Moscow. There were many memorable matches in the 2005 season, including a home win over Zenit St.Petersburg 1–0, a big win over Dynamo Moscow 4–1 and a defeat at the hands of Lokomotiv Moscow 3–4, although Amkar was leading 3–0 at half-time. In the middle of the 2006 season Head Coach Sergei Oborin left and was replaced by Rashid Rakhimov. Amkar began to play very good football, and in the part of the championship between the 19th and 30th rounds Amkar was 4th in the league by points accrued.[4] In the same season Amkar had the longest series of matches in the Premier League without conceding a goal – 15.[5]

2008. The most successful season 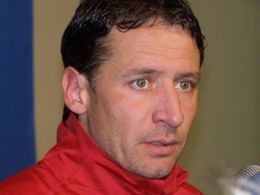 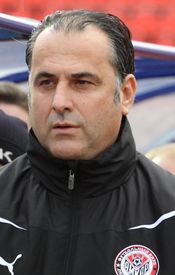 In 2007 the club made two key acquisitions, Georgi Peev arrived from Dynamo Kiev and Nikola Drincic from the Turkish club Gaziantepspor. These players became leaders of the team and during the season the team was no longer forced to struggle for survival and could play more confidently, but several factors prevented it from rising higher than 8th place. But in the 2007/2008 Russian Cup Amkar achieved the best result in its history. On 16 April 2008 the club beat Ural Yekaterinburg 1–0 and reached the final, losing to CSKA Moscow in a penalty shootout. Before the start of the 2008 season Head Coach Rashid Rakhimov left the club for Lokomotiv Moscow and was replaced by a little-known specialist from Montenegro, Miodrag Bozovic. Before the break for the Euro-2008, Amkar was in third place in the standings, one point behind second place Spartak Moscow and six adrift of the leader, Rubin Kazan. After the break, one of the team leaders Vladimir Gabulov and the captain, graduate of Perm football, Aleksei Popov, left the team for Dynamo Moscow and Rubin respectively. Two matches in a row on the "equator" of the Championship Amkar could have topped the league table but was unable to beat Tom Tomsk and Spartak Nalchik at home. On 16 November, after beating Tom in Tomsk, with one game left to play, the team from the Urals secured fourth place in the league and booked a ticket into the qualifying round of the Europa League. Once more Amkar had the best record in the Premier League for not conceding goals – 17 matches.[6] The 2008 season had been the best in the history of Amkar. 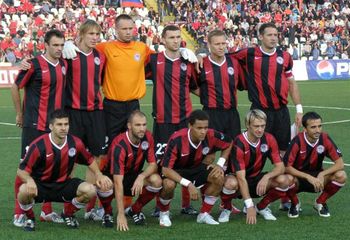 The following season Dimitar Dimitrov, having replaced Miodrag Bozovic, was unable to continue the success of his predecessor. For the first 5 rounds of the 2009 Championship the team conceded just one goal, but thereafter began to commit gross mistakes in defence on a regular basis, as a result of which the club was left fighting for survival. On 27 August Amkar was home to the English Premier League side, Fulham, in the second leg of the Europa League 2009/2010 play-off match, having lost the first leg in London 1–3, which left little hope of reaching the group stage of the tournament. The match in Perm was played before a full stadium and Amkar managed to win 1–0, but that was not enough to go through to the next round. After the 20th round of the Championship Rashid Rakhimov returned as Head Coach with the specific task of retaining the club's place in the Premier League, a task which he successfully fulfilled. In the 2009 Russian Championship Amkar's goalkeepers saved four penalties out of five. 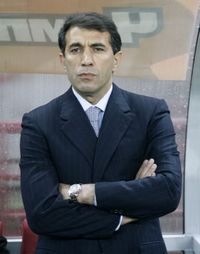 In the Russian Cup Amkar beat the two Avangard clubs from Kursk and Podolsk, then in the quarterfinal was awarded a technical victory over the defunct FC Moscow but on 21 April 2010 lost at home in the semifinal to Zenit in a penalty shoot-out, having played full-time and extra time 0–0. In the 2010 season, fighting for survival until the very end, for the first time not having won a single match away from home and scoring the least number of goals, Amkar finished in 14th place and retained their place in the Premier League. After the final whistle had sounded in the last match of the season, Martin Kushev, captain and one of the best players in the history of the club, the team's top scorer in the Premier League, having played for Amkar from 2005 till 2010, announced the end of his career as a player. After the completion of his playing career at Amkar, Martin should have become assistant coach to Rakhimov, but the management offered him a place in the coaching staff of the youth team. Kushev preferred to return to Bulgaria to join Slavia Sofia. Six months later he became head coach of Slavia.

On 21 December 2010, a statement to the effect that Amkar was voluntarily to join the First Division due to financial difficulties appeared on the club's official website.[7] As a result supporters of the club attempted to raise funds in support of Amkar, appealing to representatives of Perm business circles. However the powers that be did not rate the actions of the supporters highly. Gennady Shilov stated that he was prepared to replace retiring Valery Chuprakov as club President. Shilov also stated an intent to approach the regional authorities for help and to look for sponsors. The Premier League gave Amkar until 15 January. On 25 January 2011 Amkar withdrew its request to leave the Premier League. 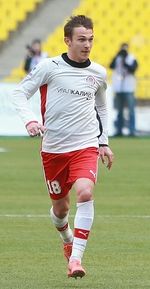 In 2011, the club began to give more opportunities to young players such as Mikhalyov, Kolomeytsev, Burmistrov and Sekretov. The team had an inconsistent season, memorable for the club and the fans were dramatic matches with Kuban Krasnodar, which ended in a 3–2 defeat, a draw with Zenit 1–1 at the Petrovsky Stadium and a victory over Spartak Moscow 2–1 at the Luzhniki Stadium. On 28 September 2011, after a series of 10 games without a win in official matches, the club parted with Rashid Rakhimov by mutual consent.[8] On the next day, 29 September 2011, the team introduced their new Head Coach, Miodrag Bozovic,[9] who had been head of Amkar in 2008 and led the club to fourth place in the Russian Championship and the final of the National Cup. After the first half of the Russian Championship season 2011/2012 the team was in 12th place.

On 11 June 2012, Miodrag Bozovic resigned once more as Head Coach and the Youth Team Head Coach, Rustem Khuzin, was appointed acting Head Coach.[10] Under their new coach Amkar, for the first time in their history, beat CSKA (3–1) in the second half of the Championship. In the 12th round match against Terek Grozny Amkar appeared in new kit with the Uralkali logo. However, the team played poorly for the rest of the season,[11] managing only four points from their last eight games (an away win over Lokomotiv and a draw away to Mordovia).

On January 17, 2013 in view of the fact that Rustem Huzin had been accepted on a coaching course for his UEFA Pro Licence, he became eligible for the post of Head Coach, and Trubachev's contract was terminated. From then on Huzin officially became Amkar's Head Coach. Under their new Head Coach Amkar recorded its biggest ever victory in the Premier League over Alania Vladikavkaz (5–1), and then played out draws with Dynamo (1–1), and Rubin (1–1), having lost their Spring matches to Kuban Krasnodar (1–2), and Spartak Moscow (0–2). A series without a win followed the victory over Alania and after the Dynamo match Amkar lost to Terek (1–2) and Lokomotiv (2–4). After another devastating defeat from Kuban (0–4), followed by a victory over their direct rivals Rostov (3–2), and a goalless draw with Zenit, the club retained the right to play in the Premier League. In June 2013 the club decided not to renew the contracts of Rustem Huzin and senior team coach Alexander Gorshkov, which were due to expire in the summer. Amkar's new Head Coach became Stanislav Cherchesov, who had previously been working with Terek.[12][13] He was appointed on a two-year contract and was accompanied by the new senior team coach Miroslav Romaschenko, goalkeeper coach Gintaras Stauce and team doctor Eduard Tsgoev, all of whom had been at Terek. 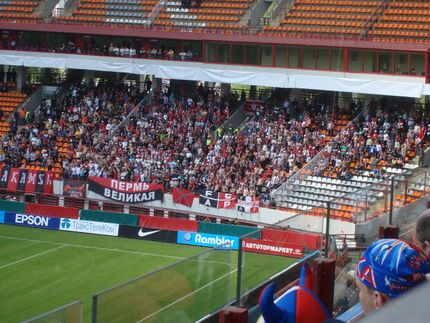 Amkar has participated in European football only once. Having finished 4th in the 2008 Russian Championship the club earned the right to play in the Europa League. Amkar lost the first match to the English club Fulham 1–3 and although "Permyaki" won the second match 1–0, the club was eliminated and Fulham progressed, eventually reaching the final.