Football Club Anzhi Makhachkala (Russian: Футбо́льный клуб Анжи́ Махачкала́, pronounced [fʊdˈbolʲnɨj ˈklup ɐnˈʐɨ məxəʂkɐˈla]) is a Russian football club based in Makhachkala, capital of the Republic of Dagestan. Founded in 1991, the club competes in the Russian Football Premier League, playing their home games at the Anzhi-Arena.

On 18 January 2011, Anzhi Makhachkala was purchased by billionaire Suleyman Kerimov,[1][2] and subsequently made numerous high-profile signings, including those of striker Samuel Eto'o[3] and manager Guus Hiddink. Following severe budget cuts ahead of the 2013–14 Russian Premier League season, the club lost most of its key players and went on to finish bottom of the table, which resulted in relegation to the Russian National Football League at the end of the season, returning at the first attempt.

The club was founded in 1991 by former Dinamo Makhachkala player Magomed-Sultan Magomedov, then head of Dagnefteprodukt, and took part in its first season in the Dagestan League the same year. They ended up as league champions with an unbeaten record and 16 wins out of 20 matches.[4]

Due to the dissolution of the Soviet Union, the club entered Zone 1 of the Russian Second Division (the third-highest tier) in 1992[4] and finished in fifth place. The club won their Group in 1993, but due to league reorganisation were not promoted, and remained in the new Western Zone of the third tier until a second-place finish in 1996 guaranteed promotion to the First Division,[5] under the coaching of Eduard Malofeev.[4] A key player in Anzhi's early history was Azerbaijani international forward Ibragim Gasanbekov, who was the team's top scorer in all of their first seven seasons. He was league top scorer in 1993 (30 goals) and 1996 (33 goals).

In 1999, Anzhi won the First Division, and were thus promoted to the top-flight Premier League for the first time.[4] The side missed out on a bronze-medal finish on the last day of the season, as they conceded a last-minute Torpedo Moscow penalty which took their opponents into third place.[6] On 20 June 2001, the club played in the final of the Russian Cup for the first time, losing to Lokomotiv Moscow on penalties after a 1–1 draw.[4]

Anzhi finished 15th and were relegated from the Premier League in 2002, but during their first season back in the First Division, they reached the semi-finals of the Russian Cup, where they lost 1–0 to Rostov.[7] In their seventh season in the First Division, Anzhi won the league and returned to the Premier League.[4] On 5 December 2010, defender Shamil Burziyev died in a car accident at the age of 25.[8] 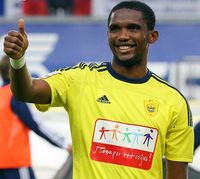 Cameroonian striker Samuel Eto'o was the team's captain until his departure to Chelsea in 2013
File:Roberto Carlos 7221.jpg
Roberto Carlos with Anzhi in 2011

On 18 January 2011, the club was purchased by Dagestani billionaire Suleyman Kerimov,[9] but later it was revealed that the President of Dagestan, Magomedsalam Magomedov, met Kerimov and gave him a 100% stake in the club, including 50% of the shares of the former owner of the club Igor Yakovlev, in exchange for financial support.[10] Kerimov was planning to invest over $200 million in infrastructure, of which a substantial amount will go in building a new stadium with a capacity of more than 40,000 spectators, which would meet all UEFA requirements.[11]

Kerimov's investment was immediate as the club made signings in the 2011 winter transfer window. The first significant signing came on 16 February, when the club announced the free transfer of Brazilian left-back Roberto Carlos, a FIFA World Cup winner in 2002.[12] Further signings included €10 million on another Brazilian, the former Corinthians midfielder Jucilei[13] and €8 million on Moroccan winger Mbark Boussoufa from Anderlecht. Boussoufa's transfer was finalised in the last minute of the window, on 10 March.[14]

In summer 2011, the club signed the Hungarian Balázs Dzsudzsák, who signed a four-year deal to transfer for a reported €14 million.[15] Anzhi also bought Russian midfielder Yuri Zhirkov from Chelsea for a similar fee.[16] On 23 August 2011, Cameroonian striker Samuel Eto'o signed from Inter Milan for approximately €28 million on a world-record €20.5 million annual salary.[17]

On 30 January 2012, Roberto Carlos announced his plans to retire at the end of the season.[20] He ended his football career on 9 March and took up a role as the club's director.[21]

On 10 October 2012, Anzhi opened a youth academy, the first in Dagestan in order to develop youth talents for the first team. The academy is being run by Anzhi Sporting Director Jelle Goes.[22]

On 22 July 2013, Hiddink resigned from his post as manager, ending an 18-month stint. His newly appointed assistant, countryman René Meulensteen, was promoted to the manager position.[23] However, after 16 days as the team manager, Meulensteen was sacked.[24]

On 7 August 2013, Kerimov decided to reduce the team's annual budget by two-thirds.[25][26] As a result, on 15 August 2013, Yuri Zhirkov, Igor Denisov (who had played only joined the club in June) and Aleksandr Kokorin (who himself had just signed weeks before) were packaged to Dynamo Moscow for an undisclosed fee. The three players had been purchased with the previous two years at a cost exceeding €50 million.[citation needed] Remchukov said that the reason for the move was the "sharp deterioration in the health of Suleyman Kerimov, because of worries about the club’s lack of success".[24] In addition, Dynamo also signed Christopher Samba, Vladimir Gabulov and Aleksei Ionov from Anzhi. Other cost-cutting transfers included Samuel Eto'o and Willian to English side Chelsea (the latter of which had only just signed for Anzhi in January 2013); Lassana Diarra, Mbark Boussoufa and Arseniy Logashov to Lokomotiv Moscow; João Carlos to Spartak Moscow; and Oleg Shatov to Zenit Saint Petersburg. The firesale continued into January 2014 with the sale of striker Lacina Traoré to Monaco for €18 million and the sale of midfielder Jucilei to Emirati side Al-Jazira.[27]

The budget cut resulted in Anzhi performing very poorly in the 2013–14 Russian Premier League: when the season ended, Anzhi finished last and were relegated after amassing a record-low of three wins and 20 points, making them the worst last-placed team in Europe.[28] However, they returned to the top division at the first attempt.

File:Logo of FC Anzhi Makhachkala.png
Anzhi badge from 2007 to 2009, the club went back to the original version in 2010

The club's crest includes a yellow eagle in traditional Caucasian clothing with elements of the Dagestani flag.

The club's name derives from the word "Anzhi", meaning 'pearl' in the local Kumyk language. It was also the ancient name for the land around where Makhachkala is situated.

In the 2013–14 season they changed their shirt sponsor from Adidas to Nike.

Anzhi played at the Dynamo Stadium until 2013.

Due to armed conflict in Dagestan, the club's players live and train in a village near Moscow, at a training base previously used by Saturn Moscow. The club fly in for home matches,[29][30] which have a heavy security presence.[31]

The club's 28,000-seat Anzhi-Arena was built in 2003, and due to its facilities is not used in European competition, for which Anzhi use the Lokomotiv Stadium in Moscow. A high-priority goal of Kerimov when he purchased the club was the construction of a new 40,000 seater ground.[32][33]

Anzhi receive most of their support from the Northern Caucasian region, particularly from the city of Makhachkala. The club also enjoys support from fans scattered all over Dagestan, and the local area in general.[34]

The club is hated by some supporters of the Moscow-based clubs as well as Zenit Saint Petersburg, in part out of jealousy of the club's former wealth and also out of ethnic and religious animosity.[35]

Anzhi participated in the 2001–02 UEFA Cup. Their opponents were Rangers of Scotland. Instead of usual home-and-away fixtures, UEFA decided to hold a single match in a neutral venue—the Polish Army Stadium in Warsaw—due to the unstable situation in neighbouring Chechnya. Rangers won the match 1–0.

After finishing fifth in the 2011–12 Russian Premier League, Anzhi qualified for the group stage of the UEFA Europa League for the first time in the club's history, after eliminating Budapest Honvéd in the second qualifying round, Vitesse in the third qualifying round and AZ Alkmaar in the play-off round.[36] However, they again had to play home matches away, this time at the Luzhniki Stadium, due to unrest in the city of Makhachkala. They finished second in group A behind Liverpool; both games between the two ended as 1–0 home wins. Liverpool, Anzhi and Young Boys took the top three positions in the group respectively with ten points each, and were ranked by their head-to-head record with fourth-placed Udinese; Anzhi were the only team in the group not to lose at home, having won all their home games in the group stage. Guus Hiddink's team were drawn with German side Hannover 96, who won group L. The Russians won the first leg 3–1 at the Luzhniki before a 1–1 draw in Hanover sent them through 4–2 on aggregate. They then faced Newcastle United in the next round, where Alan Pardew's men became the first team to deny Anzhi a home win in European competition. In the second leg away at St James' Park, Newcastle's Papiss Cissé headed home the winner in the last second to eliminate Anzhi; Mehdi Carcela-González had earlier been sent off for the club.

1 Only one leg was played, in a neutral venue in Warsaw, Poland, due to security concerns in Russia.

As of 29 March 2016, according to the RFPL official website

Had international caps for their respective countries. Players whose name is listed in bold represented their countries while playing for Anzhi.