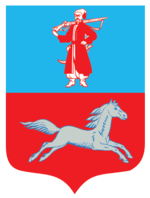 FC Cherkaskyi Dnipro is a professional Ukrainian football club from the city of Cherkasy. The club currently competes in the Ukrainian First League.

The club became the first that managed to advance to the Ukrainian Cup semifinals in 2014, while playin in the Ukrainian Second League.

The club was established in 2010 by a governor of Cherkasy Oblast Serhiy Tulub as FC Slavutych Cherkasy.[1] Originally the new club had nothing to do with FC Dnipro Cherkasy.[1] The club received a new bus for transport as a gift and expansion for its sporting facilities.[2] The clubs home ground is Central Stadium which was refurbished in 2003 and has a capacity of 10,321.[3]

The club started out in the 2011 Ukrainian Football Amateur League. The club submitted its license to the Professional Football League of Ukraine and was accepted into the Ukrainian Second League for the 2011–12 season. The June 20, 2011 decision of the Central Council of PFL team accepted the team's professional status.[4]

Soon after the establishment of the club (in 2011), the Dnipro ultras asked the club's leadership to returned the city's club its original name of Dnipro instead of Slavutych and recognize the original club as a direct predecessor of Slavutych.[5][1]

The club known as FC Slavutych Cherkasy in July 2014 merged with neighbors FC Zorya Bilozirya and was initially renamed, Slavutych-Zorya Cherkasy.[6] However the club decided to have input from their fans and the club was renamed to Cherkaskyi Dnipro.[7] It placed the year of establishment of FC Dnipro Cherkasy 1955 on its club's shield.

Squad is given according to the PFL website, as of 9 April, 2016. Note: Flags indicate national team as defined under FIFA eligibility rules. Players may hold more than one non-FIFA nationality.