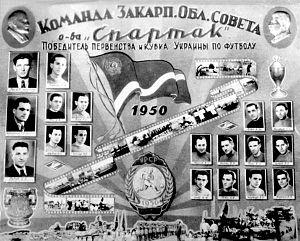 The club was inaugurated in 1946 as Spartak Uzhhorod. However some of its emblems point out to its preceding club that existed before the World War II, SC Rus, which was created in 1925. Direct succession between the two franchises can hardly be traced. In 1961 Spartak was renamed to Verhovyna and in 1971 to Hoverla. In 1982 it was renamed to Zakarpattia and back to Verhovyna in 1997 for 2 years.

In 2001, Zakarpattia debut in the Ukrainian Premier League, however, a last place finish saw them demoted back to the Ukrainian First League. They resurfaced again in the 2004–05 and 2007–08 but the club was unable to avoid relegation once again after taking last place.

Before the start of the 2011–12 Ukrainian First League season the club renamed itself to FC Hoverla-Zakarpattia Uzhhorod.[1]

The team renamed themselves to Hoverla prior to the start of the 2012–13 Ukrainian Premier League season.[2]