PFC Nyva Vinnytsia was a professional Ukrainian football club based in the city of Vinnytsia. The name "Nyva" literally means "grain field". The club originally was created in 1958 in the Soviet Union and in 2006 it dissolved. A new club was revived in Ukraine the same year, which however also folded in 2012.

From 1992 to 1998, Nyva Vinnytsia played in the Ukrainian Premier League, after being initially chosen to participate for being one of the top 9 (of 11) Ukrainian teams from the West Division of the Soviet Second League in 1991.

It had a little break in the '93 season when it joined the company of the second division teams in the First League. Nyva was quickly promoted back to the elite next season after gaining the top seat.

Nyva Vinnytsia's best achievement in the Ukrainian Premier League was 10th place in the 1993–94 season. The club also surprisingly made the 1995–96 Ukrainian Cup finals, only to lose to Dynamo Kyiv. As a result, Nyva took part in the 1996–97 UEFA Cup Winners' Cup, even progressing to the First round after beating JK Tallinna Sadam on away goals (1:2 loss in Tallinn and 1:0 win in Vinnytsia). However, Swiss side FC Sion beat the Ukrainian side with a 6:0 score on aggregate (2:0 in Sion and 4:0 in Vinnytsia).

The club ceased to exist after it relegated from the First League in 2006 and because of financial difficulties. In 2006 it carried name FC Bershad of its farm-team and was based in little town Bershad, Vinnytsia oblast.

For the 2008–09 season the club reentered professional league competition into the Second League as FC Nyva-Svitanok, the new part of its name meaning dawn, or new beginning. 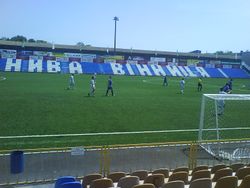 On 8 July 2008 the club changed their name from "FC Nyva-Svitanok Vinnytsia" to "PFC Nyva Vinnytsia".[1]

The club plays on one of two stadiums in Vinnytsia: the Khimik Arena that is a communal property with a capacity of 5,000 spectators and club's training facilities located there, and the Municipal Central Stadium (former Lokomotyv) that was expanded prior to 1980's Olympics with capacity of 24,000 spectators. The Central Stadium usually being used in "big" matches versus famous opponents, all the other matches were played in the Khimik Stadium.

Its first and the only European competition participation occurred in 1996–97 season in UEFA Cup Winners' Cup.