Football Club Zenit (Russian: Футбо́льный клуб «Зени́т» [fʊdˈbolʲnɨj ˈklup zʲɪˈnʲit], Zenith), also known as Zenit Saint Petersburg, is a Russian football club from the city of Saint Petersburg. Founded in 1925 (or in 1914, according to some Russian sources), the club plays in the Russian Premier League. Zenit were the 2007, 2010, 2011–12 and 2014–15 champions of the Russian Premier League and the winners of both the 2007–08 UEFA Cup and the 2008 UEFA Super Cup.

Zenit's history is tightly connected with the political history of Saint Petersburg, Russia (also called "Petrograd" and "Leningrad" at times in its history). In 1897, the first football match in Russia was held in Saint Petersburg on Vasilievsky Island, an unofficial game between the local English team "Ostrov" and the local Russian team "Petrograd," which the English team won, 6–0. The players of those local teams were amateurs and loosely associated with each other. At the same time, several formal football clubs were founded in Saint Petersburg, mainly around large industrial companies. Players' membership was unofficial and very loose, however, sometimes allowing the same players to play for several different teams during the same season.

The original team Zenit stemmed from several football teams, which changed names and owners many times during the Soviet era after the Revolution of 1917. Powerful political forces manipulated the careers of individual players as well as the fate of the whole team. The club was renamed several times, and its owners and leaders were under political pressure for many decades. The origins of Zenit date back to the beginning of the 20th century, to several predecessor teams in Saint Petersburg that were playing locally. The oldest documented predecessor of Zenit was team "Murzinka," founded in 1914, which played in the same Obukhovsky stadium from 1914 until 1924, when the team became to be called "Bolshevik" (the new name for Obukhovsky industry and its stadium). The team and stadium survived the drama of World War I, the Bolshevik revolution of 1917, and the Russian Civil War of 1918 to 1922.

In 1925, another predecessor team of Zenit was formed, of workers from the Leningradsky Metallichesky Zavod (Leningrad Metal Plant); they were called the "Stalinets" in the 1930s. (Stalinets translates literally to English as "Stalinists"; however, in Russian, the name is a play on words as stal means "steel" in that language.) Historians documented that both predecessor teams of Zenit were playing independently until their official merger at the end of 1939. The Stalinets were not the same team named Zenit that took part in the 1938 USSR championship. The current name of FC Zenit was registered in 1936, as Bolshevik became part of the Zenit sports society and was renamed, three years before the Stalinets merged with it. In 1939, during the rule of Joseph Stalin, Leningradsky Metallichesky Zavod became part of the military industry and its sports teams, players, and managers were transferred to the Zenit sports society. FC Zenit was ordered to take in members of the "Stalinets" metallurgical workers' team after the end of the 1939 season.

Zenit in the Soviet League

FC Zenit won their first honours in 1944, claiming the war-time USSR Cup after defeating CSKA in the well-attended final. The club was always adored in Leningrad,[citation needed] but was not able to make much of a significant impact in the Soviet League. In 1967, Zenit finished last but were saved from relegation because the Soviet leadership decided it would not be prudent to relegate a Leningrad team during the 50th anniversary of the October Revolution, which occurred in the city. Composer Dmitry Shostakovich and film star Kirill Lavrov were well known as ardent supporters of Zenit, a passion that is reflected in their attendance of many games.[citation needed] FC Zenit won the bronze medal in 1980, also reaching the Soviet Cup Final and winning the Soviet League title in 1984. In 1985, Zenit beat the Soviet Cup holder in the Soviet Super Cup (also called the Season Cup).

Zenit in the Russian League

The LOMO optical plant took up the ownership of the team after the war.[vague] In 1990, FC Zenit were re-registered as an independent city-owned professional club. After being relegated in the first year of the Russian League (1992), Zenit returned to the top flight in 1996 and has been decent since. They claimed the 1999 Russian Cup, finished third in the League in 2001, made the Cup final in 2002, became the runners-up in the Premier League and won the Russian Premier League Cup in 2003.

In December 2005, Gazprom took a controlling stake in the club.[1] The deal was announced by Valentina Matviyenko, the Saint Petersburg governor. Gazprom bought the majority of the club and invested over $100 million, buying new players and building the new stadium. 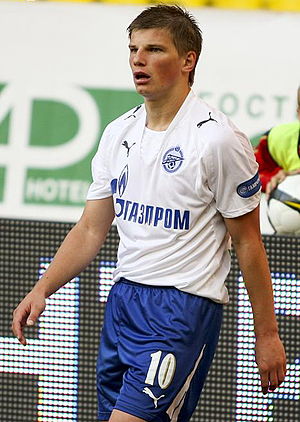 Andrey Arshavin, one of the best players in Zenit history.

Although Zenit reached the quarterfinal of the UEFA Cup in 2006, a mediocre start to the league season led to the summer replacement of coach Vlastimil Petržela. In July 2006, Dick Advocaat [2] took over as Zenit's manager. Advocaat worked together with his assistant manager, former Netherlands National Youth Team coach Cor Pot. Zenit won the 2007 Russian Premier League—their best league achievement since winning the USSR Championship in 1984—allowing them to compete in the group stage of the Champions League 2008–09.

In 2008, Zenit won the Russian Super Cup and reached the quarter-final of the UEFA Cup for the second time in their history. In the first leg of the quarter-final away game against German side Bayer Leverkusen, the team achieved a 4–1 victory. They qualified for the semi-finals of the competition for the first time in their history, despite a 1–0 home loss to Leverkusen in the second leg, and were drawn to play further German opposition in the semi-final, Bayern Munich, considered the top team remaining.[3] A battling performance in the first leg of the semi-final earned Zenit a 1–1 draw away against Bayern Munich. In the second leg at home, Zenit won 4–0, defeating Bayern 5–1 on aggregate and going through to the UEFA Cup Final for the first time in club history, where they met Scottish side Rangers at the City of Manchester Stadium in Manchester on 14 May. Zenit won 2–0, with goals from Igor Denisov in the 72nd minute and Konstantin Zyryanov in stoppage time, to lift the club's first ever UEFA Cup. Andrey Arshavin was named man of the match.[4]

On 29 August 2008, at the Stade Louis II in Monaco, Zenit then defeated Manchester United 2–1 in the 2008 UEFA Super Cup, becoming the first Russian side to win the trophy. Pavel Pogrebnyak scored the first goal and Danny scored the second, the latter being named man of the match in his debut for Zenit.[5] In the 2008–09 Champions League Group Stage, Zenit was grouped with Real Madrid, Juventus and BATE Borisov in Group H, which by some was marked as the "group of death." Zenit ultimately finished in third place in the Group, behind Juventus and Real Madrid, and was thus unable to progress to the knockout phase of the competition. This position, however, was good enough to earn the club a place in the 2008–09 UEFA Cup last 32, where the team faced VfB Stuttgart for a place in the last 16 of the competition. After defeating Stuttgart on away goals, Zenit went on to lose 2–1 over two legs against Italian club Udinese. 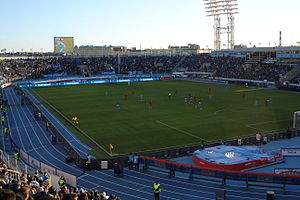 Zenit against Bayern Munich in 2011.

Luciano Spalletti signed a contract with Zenit in December 2009, with Italian coaches Daniele Baldini, Marco Domenichini and Alberto Bartali also joining the Russian club. The Board of Zenit mandated him to return the Russian Premier League title to Zenit, win the Russian Cup and progress from the Group Stage of the Champions League in his first year.

Zenit won the Russian Cup on 16 May 2010 after beating Sibir Novosibirsk in the final (previously beating Volga Tver in the quarterfinal and Amkar Perm in the semifinal). After 16 games in the 2010 Premier League, with 12 wins and four draws, Zenit claimed 40 points, setting a new Russian Premier League record for most points won at that stage of the campaign. In the summer transfer window of 2010, Spalletti made his first signings, securing forward Aleksandr Bukharov and midfielder Sergei Semak from Rubin Kazan; defenders Aleksandar Luković from Udinese and Bruno Alves from FC Porto. 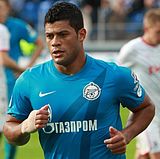 On 25 August 2010, Zenit lost its first game under Spalletti to French side AJ Auxerre and failed to advance to the Champions League Group Stage, instead participating in the UEFA Europa League. On 3 October, Zenit beat Spartak Nalchik to set another Russian Premier League record for most consecutive games going undefeated, with 21 games since the start of the league season. On 27 October, however, Zenit suffered its first defeat of the season at the hands of rival club Spartak Moscow, just seven games short of finishing the championship undefeated. On 14 November, Zenit defeated FC Rostov and two games prior to the end of the season won the championship title, the first in Spalletti's managerial career.

Zenit progressed through the knockout stage of the 2010–11 UEFA Europa League in first place, then beating BSC Young Boys in the Round of 16. On 6 March 2011, Zenit won against CSKA Moscow in the Russian Super Cup, the third Russian trophy won under Spalletti. On 17 March, however, Zenit were knocked out of the UEFA Europa League, losing to Dutch team FC Twente 2–3 on aggregate in the quarterfinals.

In the 2011–12 Champions League, Zenit began the Group Stage drawn into Group G alongside FC Porto, Shakhtar Donetsk and APOEL. On 6 December 2011, the team finished the Group Stage in second place and for the first time in club's history qualified for the spring knockout phase of Champions League. In the Round of 16, Zenit were drawn with Portuguese side Benfica, winning the first leg 3–2 at home through two goals from Roman Shirokov and one from Sergei Semak. In the second leg in Lisbon, however, Zenit lost 2–0 and were thus eliminated from the competition.

After a series of disappointing results in both the Champions League and the Premier League, Spalletti was fired on 11 March 2014.[7] A week later, the club announced they had negotiated a two-year deal with André Villas-Boas, who himself had been released a few months prior after a disappointing stint as manager of English side Tottenham Hotspur.[8] In the 2014-15 UEFA Europa League, Zenit were put out at the quarter finals by Sevilla. In May 2015, Zenit won the Russian championship, the first championship title under Villas-Boas and the team's fifth-ever on the eve of its 90th anniversary celebration. Zenit then defeated Lokomotiv Moscow in the 2015 Russian Super Cup 1–1 (4–2 on penalties). Later in 2015, Villas Boas said that he would be leaving the club after the 2015-16 season. In the 2015–16 Champions League, Zenit began the competition in the Group Stage. They were drawn in Group H with Valencia, Lyon and Gent. They ended the group stage with their best group stage finish ever, winning 5 games out of 6 and ending as Group Winners.

Zenit's home ground is now the 21,500-capacity Petrovsky Stadium in Saint Petersburg.[9] In 2007, the club's former home base at the Kirov Stadium was demolished, to be replaced with a new stadium built for Zenit, Piter Arena. The new football stadium in Saint Petersburg is currently under construction. Once completed, it will host Zenit's home matches. The stadium will have a capacity of 64,287.[10]

As of 22 October 2015.
Note: Flags indicate national team as defined under FIFA eligibility rules. Players may hold more than one non-FIFA nationality.