From Infogalactic: the planetary knowledge core
Jump to: navigation, search
For other uses, see façade (disambiguation). 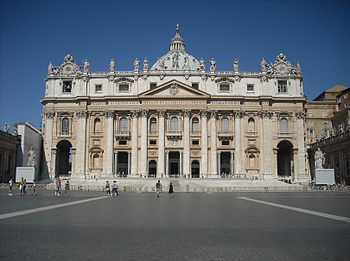 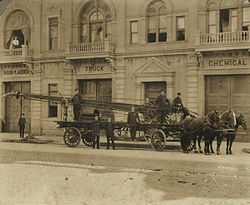 The façade of the Houston Fire Department's Central Station, c. 1914.

A facade or façade (/fəˈsɑːd/) is generally one exterior side of a building, usually, but not always, the front. The word comes from the French language, literally meaning "frontage" or "face".

In architecture, the façade of a building is often the most important aspect from a design standpoint, as it sets the tone for the rest of the building. From the engineering perspective of a building, the façade is also of great importance due to its impact on energy efficiency.[1] For historical façades, many local zoning regulations or other laws greatly restrict or even forbid their alteration.

The word comes from the French word façade, which in turn comes from the Italian facciata, from faccia meaning face, ultimately from post-classical Latin facia. The earliest usage recorded by the Oxford English Dictionary is 1656.[2]

It was quite common in the Georgian period for existing houses in English towns to be given a fashionable new façade. For example, in the city of Bath, The Bunch of Grapes in Westgate Street appears to be a Georgian building, but the appearance is only skin deep and some of the interior rooms still have Jacobean plasterwork ceilings.[3]

In modern highrise building, the exterior walls are often suspended from the concrete floor slabs. Examples include curtain walls and precast concrete walls. The façade can at times be required to have a fire-resistance rating, for instance, if two buildings are very close together, to lower the likelihood of fire spreading from one building to another.

In general, the façade systems that are suspended or attached to the precast concrete slabs will be made from aluminium (powdercoated or anodized) or stainless steel. In recent years more lavish materials such as titanium have sometimes been used, but due to their cost and susceptibility to panel edge staining these have not been popular.

Whether rated or not, fire protection is always a design consideration. The melting point of aluminium, 660 °C (1,220 °F), is typically reached within minutes of the start of a fire. Firestops for such building joints can be qualified, too. Putting fire sprinkler systems on each floor has a profoundly positive effect on the fire safety of buildings with curtain walls.

Some building codes also limit the percentage of window area in exterior walls. When the exterior wall is not rated, the perimeter slab edge becomes a junction where rated slabs are abutting an unrated wall. For rated walls, one may also choose rated windows and fire doors, to maintain that wall's rating.

On a film set and within most themed attractions, many of the buildings are only façades, which are far cheaper than actual buildings, and not subject to building codes (within film sets). In film sets, they are simply held up with supports from behind, and sometimes have boxes for actors to step in and out of from the front if necessary for a scene. Within theme parks, they are usually decoration for the interior ride/attraction/restaurant, which is based on a simple building design.