The facial feedback hypothesis states that facial movement can influence emotional experience. For example, an individual who is forced to smile during a social event will actually come to find the event more of an enjoyable experience.

Charles Darwin was among the first to suggest that physiological changes caused by an emotion had a direct impact on, rather than being just the consequence of that emotion. He wrote:

Following on this idea, William James proposed that, contrary to common belief, awareness of bodily changes activated by a stimulus "is the emotion".[2]:449 If no bodily changes are felt, there is only an intellectual thought, devoid of emotional warmth. In The Principles of Psychology, James wrote: "Refuse to express a passion, and it dies".[2]:463

This proved difficult to test, and little evidence was available, apart from some animal research and studies of people with severely impaired emotional functioning. The facial feedback hypothesis, "that skeletal muscle feedback from facial expressions plays a causal role in regulating emotional experience and behaviour",[3] developed almost a century after Darwin.

Development of the theory

While James included the influence of all bodily changes on the creation of an emotion, "including among them visceral, muscular, and cutaneous effects",[4]:252 modern research mainly focuses on the effects of facial muscular activity. One of the first to do so, Silvan Tomkins wrote in 1962 that "the face expresses affect, both to others and the self, via feedback, which is more rapid and more complex than any stimulation of which the slower moving visceral organs are capable".[4]:255

Two versions of the facial feedback hypothesis appeared, although "these distinctions have not always been consistent".[5]

According to Jeffrey Browndyke,[7] "the strongest evidence for the facial feedback hypothesis to date comes from research by Lanzetta et al. (1976)" (but see "Studies using Botox" below for more recent and powerful evidence). Participants had lower skin conductance and subjective ratings of pain when hiding the painfulness of the shocks they endured, compared with those who expressed intense pain.

However, in all research, difficulty remained in how to measure an effect without alerting the participant to the nature of the study and how to ensure that the connection between facial activity and corresponding emotion is not implicit in the procedure.

Originally, the facial feedback hypothesis studied the enhancing or suppressing effect of facial efference on emotion in the context of spontaneous, "real" emotions, using stimuli. This resulted in "the inability of research using spontaneous efference to separate correlation from causality".[4]:264 Laird (1974)[8] used a cover story (measuring muscular facial activity with electrodes) to induce particular facial muscles contraction in his participants without mentioning any emotional state. However, the higher funniness ratings of the cartoons obtained by those participants "tricked" into smiling may have been caused by their recognising the muscular contraction and its corresponding emotion: the "self-perception mechanism", which Laird (1974) thought was at the root of the facial feedback phenomenon. Perceiving physiological changes, people "fill the blank" by feeling the corresponding emotion. In the original studies, Laird had to exclude 16% (Study 1) and 19% (Study 2) of the participants as they had become aware of the physical and emotional connection during the study.

Another difficulty is whether the process of manipulation of the facial muscles did not cause so much exertion and fatigue that those, partially or wholly, caused the physiological changes and subsequently the emotion. Finally, the presence of physiological change may have been induced or modified by cognitive process. 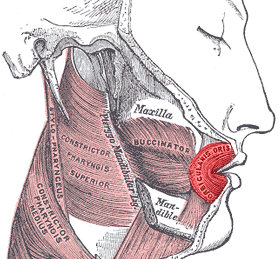 In an attempt to provide a clear assessment of the theory that a purely physical facial change, involving only certain facial muscles, can result in an emotion, Strack, Martin, & Stepper (1988)[9] devised a cover story that would ensure the participants adopt the desired facial posing without being able to perceive either the corresponding emotion or the researchers' real motive. Told they were taking part in a study to determine the difficulty for people without the use of their hands or arms to accomplish certain tasks, participants held a pen in their mouth in one of three ways. The Lip position would contract the orbicularis oris muscle, resulting in a frown. The Teeth position would cause the zygomaticus major or the risorius muscle, resulting in a smile. The control group would hold the pen in their nondominant hand. All had to fill a questionnaire in that position and rate the difficulty involved. The last task, which was the real objective of the test, was the subjective rating of the funniness of a cartoon. The test differed from previous methods in that there were no emotional states to emulate, dissimulate or exaggerate.

As predicted, participants in the Teeth condition reported significantly higher amusement ratings than those in the Lips condition. The cover story and the procedure were found to be very successful at initiating the required contraction of the muscles without arising suspicion, 'cognitive interpretation of the facial action,[9] and avoiding significant demand and order effects. It has been suggested that more effort may be involved in holding a pen with the lips compared with the teeth.[5] However, it has resolved many of the methodological issues associated with the facial feedback hypothesis. Darwin's theory can be demonstrated, and the moderate, yet significant effect of this theory of emotions opens the door to new research on the "multiple and nonmutually exclusive plausible mechanisms"[10] of the effects of facial activity on emotions as studied, for example, by Carroll Izard at the University of Delaware.

Because facial expressions involve both motor (efferent) and sensory (afferent) mechanisms, it is possible that effects attributed to facial feedback are due solely to feedback mechanisms, or feed-forward mechanisms, or some combination of both. Recently, strong experimental support for a facial feedback mechanism is provided through the use of botulinum toxin (commonly known as Botox) to temporarily paralyze facial muscles. Botox selectively blocks muscle feedback by blocking presynaptic acetylcholine receptors at the neuromuscular junction. Thus, while motor efference commands to the facial muscles remain intact, sensory afference from extrafusal muscle fibers, and possibly intrafusal muscle fibers, is diminished.

Several studies have examined the correlation of botox injections and emotion[11][12] and these suggest that the toxin could be used as a treatment for depression. Further studies have used experimental control to test the hypothesis that botox affects aspects of emotional processing. It has been suggested that the treatment of nasal muscles would reduce the ability of the person to form a disgust response which could offer a reduction of symptoms associated with obsessive compulsive disorder.[13]

In a functional neuroimaging study, Andreas Hennenlotter and colleagues[14] asked participants to perform a facial expression imitation task in an fMRI scanner before and two weeks after receiving botox injections in the corrugator supercilii muscle used in frowning. During imitation of angry facial expressions, botox decreased activation of brain regions implicated in emotional processing and emotional experience (namely, the amygdala and the brainstem), relative to activations before botox injection. These findings show that facial feedback modulates neural processing of emotional content, and that botox changes how the human brain responds to emotional situations.

In a study of cognitive processing of emotional content, David Havas and colleagues[15] asked participants to read emotional (angry, sad, happy) sentences before and two weeks after botox injections in the corrugator supercilii muscle used in frowning. Reading times for angry and sad sentences were longer after botox injection than before injection, while reading times for happy sentences were unchanged. This finding shows that facial muscle paralysis has a selective effect on processing of emotional content. It also demonstrates that cosmetic use of botox affects aspects of human cognition - namely, the understanding of language.

A study by Mariëlle Stel, Claudia van den Heuvel, and Raymond C. Smeets[16] has shown that the facial feedback hypothesis does not hold for people with autism spectrum disorders (ASD); that is, "individuals with ASD do not experience feedback from activated facial expressions as controls do".