From Infogalactic: the planetary knowledge core
Jump to: navigation, search
This article is about the general mathematical concept. For other uses, see Factor and Integer factorization.
"Common factor" redirects here. For the greatest (or highest) common divisor, see Greatest common divisor.

In mathematics, factorization (also factorisation in some forms of British English) or factoring is the decomposition of an object (for example, a number, a polynomial, or a matrix) into a product of other objects, or factors, which when multiplied together give the original. For example, the number 15 factors into primes as 3 × 5, and the polynomial x2 − 4 factors as (x − 2)(x + 2). In all cases, a product of simpler objects is obtained.

Integer factorization for large integers appears to be a difficult problem. There is no known method to carry it out quickly. Its complexity is the basis of the assumed security of some public key cryptography algorithms, such as RSA.

A matrix can also be factorized into a product of matrices of special types, for an application in which that form is convenient. One major example of this uses an orthogonal or unitary matrix, and a triangular matrix. There are different types: QR decomposition, LQ, QL, RQ, RZ.

By the fundamental theorem of arithmetic, every positive integer greater than 1 has a unique prime factorization. Given an algorithm for integer factorization, one can factor any integer down to its constituent primes by repeated application of this algorithm.[1] For very large numbers, no efficient classical algorithm is known.

Modern techniques for factoring polynomials are fast and efficient, but use sophisticated mathematical ideas (see Factorization of polynomials). These techniques are used in the construction of computer routines for carrying out polynomial factorization in Computer algebra systems. The more classical hand techniques rely on either the polynomial to be factored having low degree or the recognition of the polynomial as belonging to a certain class of known examples and are not very suitable for computer implementation. This article is concerned with these classical techniques.

While the general notion of factoring just means writing an expression as a product of simpler expressions, the vague term "simpler" will be defined more precisely for special classes of expressions. When factoring polynomials this means that the factors are to be polynomials of smaller degree. Thus, while

Students who are introduced to factoring as a primary method of solving quadratic equations might be surprised to know it is one of the newest methods of solving them. Vera Sanford points out in her A Short History of Mathematics (1930)[5] that “In view of the present emphasis given to the solution of quadratic equations by factoring, it is interesting to note that this method was not used until Harriot’s work of 1631. Even in this case, however, the author ignores the factors that give rise to negative roots.” Harriot died in 1621, and like all his books, this one, Artis Analyticae Praxis ad Aequationes Algebraicas Resolvendas, was published after his death. An article on Harriot at the Univ of Saint Andrews math history web site says that in his personal writing on solving equations Harriot did use both positive and negative solutions, but his editor, Walter Warner, did not present this in his book. Harriot’s method of factoring may look different than what modern students expect. In the first section (Sectio Prima) Harriot draws tables to illustrate the addition, subtraction, multiplication and division of monomial, binomial, and trinomial terms. Then in the second section he shows a more direct multiplication that provides the foundation to his factoring method. He sets up the equation aa − ba + ca = + bc, and shows that this matches the form of multiplication he has previously provided as,

thus factoring the four terms of the adjusted expression aa − ba + ca − bc. This example can be seen on page 16 of the Artis Analyticae Praxis ad Aequationes Algebraicas Resolvendas.

Harriot writes out a form for each of the possibilities of (a ± b)(a ± c) with a being the unknown (where we might use x today) and then when he needs to factor he picks on one of the forms that match. By separating out the linear coefficient into two parts he is able to break the problem into one of the forms.

There are only a few general methods that can be applied to any polynomial in either one variable (the univariate case) or several variables (the multivariate case).

Finding, by inspection, the monomial that is the highest common factor (also called the greatest common divisor) of all the terms of the polynomial and factoring it out as a common factor is an application of the distributive law. This is the most commonly used factoring technique. For example:[6]

A method that is sometimes useful, but not guaranteed to work, is factoring by grouping.

Factoring by grouping is done by placing the terms in the polynomial into two or more groups, where each group can be factored by a known method. The results of these partial factorizations can sometimes be combined to give a factorization of the original expression.

For example, to factor the polynomial

For a univariate polynomial, p(x), the factor theorem states that a is a root of the polynomial (that is, p(a) = 0, also called a zero of the polynomial) if and only if (x - a) is a factor of p(x). The other factor in such a factorization of p(x) can be obtained by polynomial long division or synthetic division.

For example, consider the polynomial

By inspection we see that 1 is a root of this polynomial (observe that the coefficients add up to 0), so (x - 1) is a factor of the polynomial. By long division we have

When a univariate polynomial is completely factored into linear factors (degree one factors), all of the roots of the polynomial are visible and by multiplying the factors together again, the relationship between the roots and the coefficients can be observed. Formally, these relationships are known as Vieta's formulas. These formulas do not help in factorizing the polynomial except as a guide to making good guesses at what possible roots may be. However, if some additional information about the roots is known, this can be combined with the formulas to obtain the roots and thus the factorization.

For example,[7] we can factor

if we know that the sum of two of its roots is zero. Let

be the three roots of this polynomial. Then Vieta's formulas are:

and reduces the other two equations to

If a (univariate) polynomial, f(x), has a rational root, p/q (p and q are integers and q ≠ 0), then by the factor theorem f(x) has the factor,

If, in addition, the polynomial f(x) has integer coefficients, then q must evenly divide the integer portion of the highest common factor of the terms of the polynomial, and, in the factorization of f(x), only the factor (qx - p) will be visible.

If a (univariate) polynomial with integer coefficients, say,

If we wished to factorize the polynomial

we could look for rational roots p/q where p divides -6, q divides 2 and p and q have no common factor greater than 1. By inspection we see that this polynomial can have no negative roots. Assume that q = 2 (otherwise we would be looking for integer roots), substitute x = p/2 and set the polynomial equal to 0. By dividing by 4, we obtain the polynomial equation

and it has rational roots, p/q and u/v. (If the discriminant,

, is a square number these exist, otherwise we have irrational or complex solutions, and there will be no rational roots.) Both q and v must be divisors of a so we may write these fractions with a common denominator of a, that is, they may be written as -r/a and -s/a (the use of the negatives is cosmetic and leads to a prettier final result.) Then,

where rs = ac and r + s = b. The ac method for factoring the quadratic polynomial is to find r and s, the two factors of the number ac whose sum is b and then use them in the factorization formula of the original quadratic above.

As an example consider the quadratic polynomial:

While taking the product of two (or more) expressions can be done by following a multiplication algorithm, the reverse process of factoring relies frequently on the recognition of a pattern in the expression to be factored and recalling how such a pattern arises. The following are some well known patterns.[10]

A common type of algebraic factoring is for the difference of two squares. It is the application of the formula

to any two terms, whether or not they are perfect squares.

This basic form is often used with more complicated expressions that may not a first look like the difference of two squares. For example, 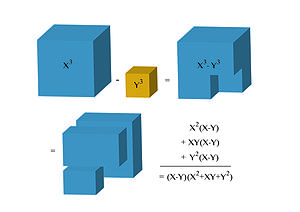 A visual representation of the factorization of cubes using volumes. For a sum of cubes, simply substitute z=-y.

Another formula for factoring is for the sum or difference of two cubes. The sum can be factored by

and the difference by

Another formula is for the difference of two fourth powers, which is

The above factorizations of differences or sums of powers can be extended to any positive integer power n.

For any n, a general factorization is:

The corresponding formula for the sum of two nth powers depends on whether n is even or odd. If n is odd, b can be replaced by −b in the above formula, to give

If n is even, we consider two cases:

Specifically, for some small values of n we have:

For instance, the sum or difference of two fifth powers is factored by

and the sum of two fourth powers is factored by 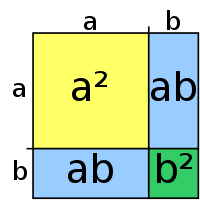 The binomial theorem supplies patterns of coefficients that permit easily recognized factorizations when the polynomial is a power of a binomial expression.

For example, the perfect square trinomials are the quadratic polynomials that can be factored as follows:

Some cubic polynomials are four term perfect cubes that can be factored as:

In general, the coefficients of the expanded polynomial

are given by the n-th row of Pascal's triangle. The coefficients of

have the same absolute value but alternate in sign.

Any univariate quadratic polynomial (polynomials of the form

) can be factored over the field of complex numbers using the quadratic formula, as follows:

are the two roots of the polynomial, either both real or both complex in the case where a, b, c are all real, found with the quadratic formula.

The quadratic formula is valid for all polynomials with coefficients in any field (in particular, the real or complex numbers) except those that have characteristic two.[11]

There are also formulas for cubic and quartic polynomials which can be used in the same way. However, there are no algebraic formulas in terms of the coefficients that apply to all univariate polynomials of a higher degree, by the Abel-Ruffini theorem.

Factoring over the complex numbers

If a and b represent real numbers, then the sum of their squares can be written as the product of complex numbers. This produces the factorization formula:

can be factored into