Faina Georgievna Ranevskaya (Russian: Фаина Георгиевна Раневская, born Faina Girschevna Feldman, 27 August [O.S. 15 August] 1896 - 19 July 1984) is recognized as one of the greatest Soviet actresses in both tragedy and comedy. She was also famous for her aphorisms.

She acted in plays by Anton Chekhov, Aleksandr Ostrovsky, Maxim Gorky, Ivan Krylov, Fyodor Dostoevsky, Leo Tolstoy, and others. Unfortunately, our judgement of her theater performances must come mostly from photos as only her three final performances of Make Way for Tomorrow by Vina Delmar, Truth is Good, but Happiness is Better by Aleksandr Ostrovsky, The Curious Savage by John Patrick were filmed. Faina Ranevskaya is more known to a wide audience as a cinema actress by her performance in such films as Pyshka (Boule de Suif), The Man in a Shell, Mechta (Dream), Vesna (Spring), Zolushka (Cinderella), Elephant and String and many more. 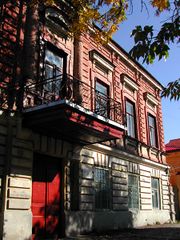 Birthplace of Faina Ranevskaya in Taganrog

She was born as Faina Feldman (Фельдман) to a wealthy Jewish family in the city of Taganrog. Her father, Girsch Haimovich Feldman, owned a dry-ink factory, several buildings, a shop and the steamboat "Saint Nicolas". He was the head of Taganrog synagogue and a founder of a Jewish asylum for the aged. Faina's mother, Milka Rafailovna (née Zagovaylova), was a great admirer of literature and art. That and her passion for Chekhov influenced Faina's love of art, poetry, music, and theater. There were three other children in the family - two brothers and an older sister named Bella.

Faina Feldman attended the elementary school classes at the Mariinskaya Gymnasium for Girls, and then received regular home education. She was given music, singing, foreign languages lessons. Faina loved reading.

File:Faina1931.jpg
Ranevskaya as Zinka in Alexander Tairov's theatrical production of the Sonate pathétique (1931).

Her passion for theater began when she was 14. Her attendance of Chekhov's The Cherry Orchard at the Moscow Art Theater was an experience that had great impact on her. Her pseudonym "Ranevskaya," which later became her official surname, also came from that theater visit.

In 1915 she left Taganrog for Moscow to pursue a career in the theater. Faina became estranged from her family over her choice of career, which they apparently rejected. She started as an extra actor in crowd or background scenes at the Summer Theater in Malakhovka near Moscow in 1915, where she also had a dacha.

The Feldman family emigrated in 1917, but Faina decided to stay and continued her acting career, working in the theaters of Kerch, Rostov on Don, at the mobile theater "The First Soviet Theater" in Crimea, also in Baku, Arkhangelsk, Smolensk and other cities.

In 1931 Ranevskaya acted at the Chamber Theater.

The film Pyshka (known as Boule de Suif in the U.S.), directed by Mikhail Romm marked her debut as a film actress in 1934. It was a silent black and white film based on the novel Boule de Suif by Guy de Maupassant where she starred as Madame Loiseau. Although the film was silent, Ranevskaya learned several sayings of Madame Loiseau in French from the original novel by Maupassant. Romain Rolland, French writer who visited Soviet Union in the thirties loved the film, and his favorite actor in the movie was Faina Ranevskaya.

The actress was awarded the Stalin Prize for outstanding creative achievements on stage in 1949, and in 1951 for her work in the film U nih est' Rodina (They Have Their Motherland), directed by Vladimir Legoshin and Alexandre Feinzimmer. In 1961 Faina Ranevskaya was awarded the title of the People's Artist of the USSR.

The actress died in 1984 in Moscow and was buried at the Donskoe Cemetery. A memorial plate dedicated to Ranevskaya was placed on her birthhouse in the city of Taganrog on August 29, 1986.

In 1992 British "Who's Who" encyclopedia named Ranevskaya among the world's Top Ten Actors of the 20th century. That was done despite the fact that the actress had never played a major part in a movie: all her roles were supporting ones[citation needed]. In his newspaper article, one of the Soviet movie industry apparatchicks explained lack of main roles by Faina Ranevskaya's "typical Semitic" face features[citation needed].

On May 16, 2008, the Ranevskaya Monument was inaugurated in Taganrog in front of actress's birth house on Ulitsa Frunze 10 within the framework of the International Ranevskaya Theater Festival "The Great Province".