From Infogalactic: the planetary knowledge core
Jump to: navigation, search
For other uses, see Falling in love (disambiguation). 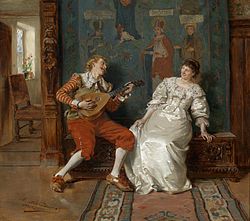 In romantic relationships, falling in love is the concept of moving from a feeling of neutrality towards a person to one of love.

The use of the term "fall" implies that the process is in some way uncontrollable and risky - as in the phrases "to fall ill" or "to fall into a trap" - and that it leaves the lover in a state of vulnerability.[citation needed]

It may also reflect the importance of the lower brain centers in the process,[1] which can lead the rational, accounting brain to conclude (in John Cleese's words) that "this falling in love routine is very bizarre....It borders on the occult".[2]

"Factors known to contribute strongly to falling in love include proximity, similarity, reciprocity, and physical attractiveness",[3] while at the same time, the process involves a re-activation of old childhood patterns of attachment.[4] Deep-set psychological parallels between two people may also underpin their pairing-bonding,[5] which can thus border on mere narcissistic identification".[6]

Jungians view the process of falling in love as one of projecting the anima or animus onto the other person, with all the potential for misunderstanding that can involve.[7] 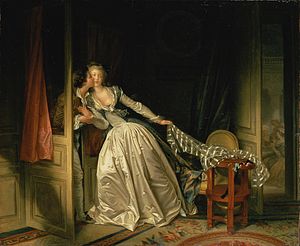 Two chemical reactions associated with falling in love are increases in oxytocin and vasopressin;[8] and Elisabeth Young-Bruehl has suggested that "when we fall in love we are falling into a stream of naturally occurring amphetamines running through the emotional centres of our very own brains".[9] With regard to sociobiology, it is stressed that mate selection cannot be left to the head alone[10] and must require complex neurochemical support.[11]

Critics of such Neo-Darwinism point out that over-simplistic physical arguments obscure the way sexual passion often leads not to secure attachment but to attachments thwarted, as well as the sheer frightening difficulties of all falling in love.[12]

Biologist Jeremy Griffith suggests that people fall in love in order to abandon themselves to the dream of an ideal state (being one free of the human condition).[citation needed]

Stendhal charted the timing of falling in love in terms of what he called crystallization - a first period of crystallization (of some six weeks)[13] which often involves obsessive brooding and the idealisation of the other via a coating of desire;[14] a period of doubt; and then a final crystallization of love.[15]

Empirical studies suggest that men fall in love earlier than women and women are quicker to fall out of love than men.[16]

While some consider falling in love to be the nearest approach to a spiritual experience possible for the non-religious,[17] others say its loss of ego boundaries is merely a temporary phenomenon which has little to do with, or may even block, spiritual development.[18]