From Infogalactic: the planetary knowledge core
Jump to: navigation, search
File:Psycho08.jpg
Hitchcock thought that if people entered the theater late and never saw Janet Leigh, they would feel cheated.[1]

In fiction, a false protagonist is a literary technique, often used to make the plot more jarring or more memorable by fooling the audience's preconceptions, that constructs a character who the audience assumes is the protagonist but is later revealed not to be.[2]

A false protagonist is presented at the start of the fictional work as the main character, but then is eradicated, often by killing them (usually for shock value or as a plot twist) or changed in terms of their role in the story (i.e. making them a lesser character, a character who leaves the story, or revealing them to actually be the antagonist).[3]

In film, a character can be made to seem like the main protagonist based on a number of techniques (beyond just simply focusing the plot on their role). Star power is a very effective method; audience members generally assume that the biggest "name" in a movie will have a significant part to play. An abundance of close-ups can also be used as a subliminal method. Generally, the star of a film will get longer-lasting and more frequent close-ups than any other character, but this is rarely immediately apparent to viewers during the film. Alternatively, the false protagonist can serve as a narrator to the movie, encouraging the audience to assume that the character survives to tell their tale later.[4]

Many of the same techniques used in film can also apply to television, but the episodic nature adds an additional possibility. By ending one or more episodes with the false protagonist still in place, the show can reinforce the viewers' belief in the character's protagonist status. Also, because TV shows often have changes of cast between seasons, some series can have unintentional false protagonists: characters who begin the series as the main character but then are replaced early in the show's run by another character entirely. When the series is viewed as a whole, this can lead to the appearance of a false protagonist.

In video games, a false protagonist may initially be a playable character, only to be killed or revealed to be the antagonist. One key way in which video games employ the method that differs from uses in non-interactive fiction is by granting the player direct control over the false protagonist. Since most video games allow a player to control only the main characters (and their success or failure is based on playing skill, not pre-determined story), the sudden demise of the character that is being controlled serves to surprise the player.[5] 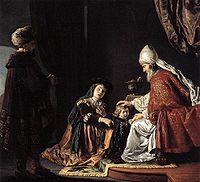 The Book of Samuel starts with Samuel as a young boy. He was the main focus in the first few chapters until he eventually becomes a minor character.

File:Halloween Resurrection Theatrical Poster 2002.jpg
Jamie Lee Curtis is featured as a frontrunner on this film's poster, event though her character is killed in the opening scene.