Falsity (from Latin falsitas) or falsehood is a perversion of truth originating in the deceitfulness of one party, and culminating in the damage of another party. Falsity is also a measure of the quality or extent of the falseness of something, while a falsehood may also mean simply an incorrect (false) statement, independent of any intention to deceive.

In æsthetics, falsity is ugly, and truth is beautiful.

In existentialism, falsity is usually a thing to be avoided, and is not desired.[1] 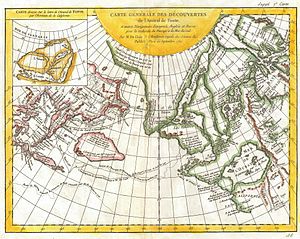 Today, based upon inaccuracies and falsities, it is known the entire De Fonte article to have been a fabrication, however, it set 18th century afire with speculation that a Northwest Passage must indeed exist.

are among the chief forms which this crime assumes.