Family in the Soviet Union

The view of the Soviet family as the basic social unit in society evolved from revolutionary to conservative; the government of the Soviet Union first attempted to weaken the family and then to strengthen it. According to the 1968 law "Principles of Legislation on Marriage and the Family of the USSR and the Union Republics", parents are "to raise their children in the spirit of the Moral Code of the Builder of Communism, to attend to their physical development and their instruction in and preparation for socially useful activity."[1]

Evolution of the Soviet family

The early Soviet state sought to remake the family, believing that although the economic emancipation of workers would deprive families of their economic function, it would not destroy them but rather base them exclusively on mutual affection. Religious marriage was replaced by civil marriage, divorce became easy to obtain, and unwed mothers received special protection. All children, whether legitimate or illegitimate, were given equal rights before the law, women were granted sexual equality under matrimonial law, inheritance of property was abolished, and abortion was legalized.[1]

In the early 1920s, however, the weakening of family ties, combined with the devastation and dislocation caused by the Civil War (1918–21), produced a wave of nearly 7 million homeless children. This situation prompted senior party officials to conclude that a more stable family life was required to rebuild the country's economy and shattered social structure. By 1922 the government allowed some forms of inheritance, and after 1926 full inheritance rights were restored. By the late 1920s, adults had been made more responsible for the care of their children, and common-law marriage had been given equal legal status with civil marriage.[1] 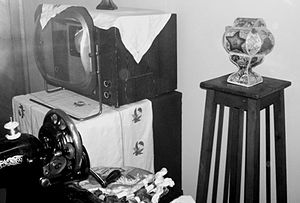 During Joseph Stalin's rule, the trend toward strengthening the family continued. In 1936 the government began to award payments to women with large families, banned abortions, and made divorces more difficult to obtain. In 1942 it subjected single persons and childless married persons to additional taxes. In 1944 only registered marriages were recognized to be legal, and divorce became subject to the court's discretion. In the same year, the government began to award medals to women who gave birth to five or more children and took upon itself the support of illegitimate children.[1]

After Stalin's death in 1953, the government rescinded some of its more restrictive social legislation. In 1955 it declared abortions for medical reasons legal, and in 1968 it declared all abortions legal. The state also liberalized divorce procedures in the mid-1960s but in 1968 introduced new limitations.[1]

In 1974 the government began to subsidize poorer families whose average per capita income did not exceed 50 rubles per month (later raised to 75 rubles per month in some northern and eastern regions). The subsidy amounted to 12 rubles per month for each child below eight years of age. It was estimated that in 1974 about 3.5 million families (14 million people, or about 5% of the entire population) received this subsidy. With the increase in per capita income, however, the number of children requiring such assistance decreased. In 1985 the government raised the age limit for assistance to twelve years and under. In 1981 the subsidy to an unwed mother with a child increased to 20 rubles per month; in early 1987 an estimated 1.5 million unwed mothers were receiving such assistance, or twice as many as during the late 1970s.[1]

Family size and composition depended mainly on the place of residence—urban or rural—and ethnic group. The size and composition of such families was also influenced by housing and income limitations, pensions, and female employment outside the home. The typical urban family consisted of a married couple, two children, and, in about 20% of the cases, one of the grandmothers, whose assistance in raising the children and in housekeeping was important in the large majority of families having two wage earners. Rural families generally had more children than urban families and often supported three generations under one roof. Families in Central Asia and the Caucasus tended to have more children than families elsewhere in the Soviet Union and included grandparents in the family structure. In general, the average family size followed that of other industrialized countries, with higher income families having both fewer children and a lower rate of infant mortality. From the early 1960s to the late 1980s, the number of families with more than one child decreased by about 50% and in 1988 totaled 1.9 million. About 75% of the families with more than one child lived in the southern regions of the country, half of them in Central Asia. In the Russian, Ukrainian, Belorussian, Moldovian, Estonian, Latvian, and Lithuanian republics, families with one and two children constituted more than 90% of all families, whereas in Central Asia those with three or more children ranged from 14% in the Kyrgyz Republic to 31% in the Tajik. Surveys suggested that most parents would have had more children if they had had more living space.[1]

Beginning in the mid-1980s, the government promoted family planning in order to slow the growth of the Central Asian indigenous populations. Local opposition to this policy surfaced especially in the Uzbek and Tajik republics. In general, however, the government continued publicly to honor mothers of large families. Women received the Motherhood Medal, Second Class, for their fifth live birth and the Mother Heroine medal for their tenth. Most of these awards went to women in Central Asia and the Caucasus.[1]

The extended family was more prevalent in Central Asia and the Caucasus than in the other sections of the country and, generally, in rural areas more than in urban areas. Deference to parental wishes regarding marriage was particularly strong in these areas, even among the Russians residing there.[1]

Extended families helped perpetuate traditional life-styles. The patriarchal values that accompany this life-style affected such issues as contraception, the distribution of family power, and the roles of individuals in marriage and the family. For example, traditional Uzbeks placed a higher value on their responsibilities as parents than on their own happiness as spouses and individuals. The younger and better educated Uzbeks and working women, however, were more likely to behave and think like their counterparts in the European areas of the Soviet Union, who tended to emphasize individual careers.[1]

Extended families were not prevalent in the cities. Couples lived with parents during the first years of marriage only because of economics or the housing shortage. When children were born, the couple usually acquired a separate apartment.[1] 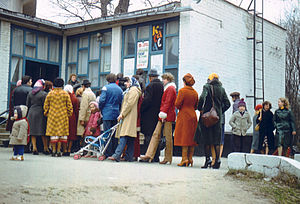 Soviet people of mixed ages queuing to a Kharkov cinema. 1981.

The government assumed many functions of the pre-Soviet family. Various public institutions, for example, took responsibility for supporting individuals during times of sickness, incapacity, old age, maternity, and industrial injury. State-run nurseries, preschools, schools, clubs, and youth organizations took over a great part of the family's role in socializing children. Their role in socialization was limited, however, because preschools had places for only half of all Soviet children under seven. Despite government assumption of many responsibilities, spouses were still responsible for the material support of each other, minor children, and disabled adult children.[1]

The transformation of the patriarchal, three-generation rural household to a modern, urban family of two adults and two children attests to the great changes that Soviet society had undergone since 1917. That transformation did not produce the originally envisioned egalitarianism, but it has forever changed the nature of what was once the Russian Empire.[1]