Family structure in the United States 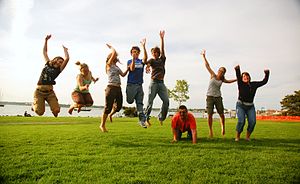 An American family composed of the mother, father, children, and extended family.

The traditional family structure in the United States is considered a family support system involving two married individuals providing care and stability for their biological offspring. However, this two-parent, nuclear family has become less prevalent, and alternative family forms have become more common.[1] The family is created at birth and establishes ties across generations.[2] Those generations, the extended family of aunts, uncles, grandparents, and cousins, can hold significant emotional and economic roles for the nuclear family.

Over time, the traditional structure has had to adapt to very influential changes, including divorce and the introduction of single-parent families, teenage pregnancy and unwed mothers, and same-sex marriage, and increased interest in adoption. Social movements such as the feminist movement and the stay-at-home dad have contributed to the creation of alternative family forms, generating new versions of the American family. 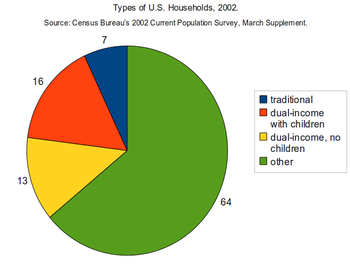 These include same-sex relationships, single-parent households, adopting individuals, and extended family systems living together. The nuclear family is also choosing to have fewer children than in the past.[3] The percentage of married-couple households with children under 18 has declined to 23.5% of all households in 2000 from 25.6% in 1990, and from 45% in 1960.

A single parent (also termed lone parent or sole parent) is a parent who cares for one or more children without the assistance of the other biological parent. Historically, single-parent families often resulted from death of a spouse, for instance in childbirth. Single-parent homes are increasing as married couples divorce, or as unmarried couples have children. Although widely believed to be detrimental to the mental and physical well being of a child, this type of household is tolerated.[4]

The percentage of single-parent households has doubled in the last three decades, but that percentage tripled between 1900 and 1950.[5] The sense of marriage as a "permanent" institution has been weakened, allowing individuals to consider leaving marriages more readily than they may have in the past.[6] Increasingly single parent families are due to out of wedlock births, especially those due to unintended pregnancy.

Stepfamilies are becoming more familiar in America. Divorce rates are rising and the remarriage rate is rising as well, therefore, bringing two families together making step families. Statistics show that there are 1,300 new stepfamilies forming every day. Over half of American families are remarried, that is 75% of marriages ending in divorce, remarry.[7]

The extended family consists of grandparents, aunts, uncles, and cousins. In some circumstances, the extended family comes to live either with or in place of a member of the nuclear family. An example includes elderly parents who move in with their children due to old age. This places large demands on the caregivers, particularly the female relatives who choose to perform these duties for their extended family.[8]

Historically, among certain Asian and Native American cultures the family structure consisted of a grandmother and her children, especially daughters, who raised their own children together and shared child care responsibilities. Uncles, brothers, and other male relatives sometimes helped out. Romantic relationships between men and women were formed and dissolved with little impact on the children who remained in the mother's extended family.

A married couple was defined as a "husband and wife enumerated as members of the same household" by the U.S. Census Bureau,[9] but they will be categorizing same-sex couples as married couples if they are married. Same-sex couples who were married were previously recognized by the Census Bureau as unmarried partners.[10] Same-sex marriage is legally permitted across the country since June 26, 2015, when the Supreme Court issued its decision in Obergefell v. Hodges. Polygamy is illegal throughout the U.S.[11]

Although Cousin marriages are illegal in most states, they are legal in many states, the District of Columbia and some territories. Some states have some restrictions or exceptions for cousin marriages and/or recognize such marriages performed out-of-state. Since the 1940s, the United States marriage rate has decreased, whereas rates of divorce have increased.[12]

Living as unwed partners is also known as cohabitation. The number of heterosexual unmarried couples in the United States has increased tenfold, from about 400,000 in 1960 to more than five million in 2005.[13] This number would increase by at least another 594,000 if same-sex partners were included.[13] Of all unmarried couples, about 1 in 9 (11.1% of all unmarried-partner households) are homosexual.[13]

The cohabitation lifestyle is becoming more popular in today's generation.[14] It is more convenient for couples not to get married because it can be cheaper and simpler. As divorce rates rise in society, the desire to get married is less attractive for couples uncertain of their long-term plans.[13]

Parents can be either the biological mother or biological father, or the legal guardian for adopted children. Traditionally, mothers were responsible for raising the kids while the father was out providing financially for the family. The age group for parents ranges from teenage parents to grandparents who have decided to raise their grandchildren, with teenage pregnancies fluctuating based on race and culture.[15] Older parents are financially established and generally have fewer problems raising children compared to their teenage counterparts.[16]

A housewife is a married woman who does not work outside of the home for income but stays and takes care of the home and children. This includes doing the cooking, washing, cleaning, etc. The roles of women working within the house has changed drastically as more women start to pursue careers. The amount of time women spend doing housework declined from 27 hours per week in 1965 to less than 16 hours in 1995, but it is still substantially more housework than their male partners.[17]

A breadwinner is the main financial provider in the family. Historically the husband has been the breadwinner; that trend is changing as wives start to take advantage of the women's movement to gain financial independence for themselves. According to the New York Times, "In 2001, wives earned more than their spouses in almost a third of married households where the wife worked."[18] Yet, even within nuclear families in which both spouses are employed outside of the home, many men are still responsible for a substantially smaller share of household duties.[19]

An only child (single child) is one without any biological or adopted brothers or sisters. Single children are stereotypically portrayed as spoiled, self-centered, and selfish. Single children often excel more in school and in their careers than children with siblings.[17]

Childfree couples chose to not have children. These include young couples, who intend to have children later, as well as those who do not plan to have any children.

Involuntary childlessness may be caused by infertility, medical problems, death of a child, or other factors.

Same-sex parents are gay or lesbian couples that choose to raise children. Nationally, 66% of female same-sex couples and 44% of male same-sex couples live with children under 18 years old.[20] In the 2000 census, there were 594,000 households that claimed to be headed by same-sex couples, with 72% of those having children.[23] In July 2004, the American Psychological Association concluded that "Overall results of research suggests that the development, adjustment, and well-being of children with lesbian and gay parents do not differ markedly from that of children with heterosexual parents."[24]

Single-parent homes in America are starting to become more common in today's society. With more children being born to unmarried couples and to couples whose marriages subsequently dissolve, children increasingly live with only one parent. The proportion of children living with a never-married parent has also grown, from 4% in 1960 to 42% in 2001.[25] Of all one parent families, 83% are mother–child families.[25]

The adoption requirements and policies for adopting children have made it harder for foster families and potential adoptive families to adopt kids. Before a family can adopt they must go through state, county, and agency criteria. Adoption agencies' criteria express the importance of age of the adoptive parents, as well as the agency's desire for married couples over single adopters.[26] Adoptive parents also have to deal with criteria that are given by the birth parents of the adoptive child. The different criteria for adopting children makes it harder for couples to adopt children in need,[26] but the strict requirements can help protect the foster children from unqualified couples.[26]

Currently 1.5 million (2%) of all U.S children are adopted. There are different types of adoption; embryo adoption when a couple is having trouble conceiving a child and instead choose to have their sperm and egg conjoined outside the womb, international adoption where couples adopt children that come from foreign countries, and private adoption which is the most common form of adoption. In private adoption, families can adopt children via licensed agencies or with by directly contacting the child's biological parents.

The traditional "father" and "mother" roles of the nuclear family have become blurred over time. Because of the women's movement's push for women to engage in traditionally masculine pursuits in society, as women choose to sacrifice their child-bearing years to establish their careers, and as fathers feel increasing pressure to be involved with tending to children, the traditional roles of fathers as the "breadwinners" and mothers as the "caretakers" have come into question.[27]

The family structure of African-Americans has long been a matter of national public policy interest.[28] The 1965 report by Daniel Patrick Moynihan, known as The Moynihan Report, examined the link between black poverty and family structure.[28] It hypothesized that the destruction of the black nuclear family structure would hinder further progress toward economic and political equality.[28]

The television industry initially helped create a stereotype of the American nuclear family. During the era of the baby boomers, families became a popular social topic, especially on television.[33] Family shows such as Roseanne, All in the Family, Leave It to Beaver, The Cosby Show, Married... with Children, The Jeffersons, and Good Times, Everybody Loves Raymond have portrayed different social classes of families growing up in America. Those "perfect" nuclear families have changed as the years passed and have become more inclusive, showing single-parent and divorced families, as well as older singles.[4] Television shows that show single-parent families include Half & Half, One on One, Murphy Brown, and Gilmore Girls.

While it did not become a common occurrence the iconic image of the American family was started in the early 1930s. It was not until WWII that families generally had the economical income in which to successfully propagate this lifestyle.[34]