A farmer[1] (also called an agriculturer) is a person engaged in agriculture, raising living organisms for food or raw materials. The term usually applies to people who do some combination of raising field crops, orchards, vineyards, poultry, or other livestock. A farmer might own the farmed land or might work as a labourer on land owned by others, but in advanced economies, a farmer is usually a farm owner, while employees of the farm are known as farm workers, or farmhands. However, in the not so distant past a farmer was a person who promotes or improves the growth of (a plant, crop, etc.) by labor and attention, land or crops or raises animals (as livestock or fish).

Farming has been dated back as far as the Neolithic era. By the Bronze Age, the Sumerians had an agriculture specialized labour force by 5000–4000 BC, and heavily depended on irrigation to grow crops. They relied on three-person teams when harvesting in the spring.[2] The Ancient Egypt farmers farmed and relied and irrigated their water from the Nile.[3] 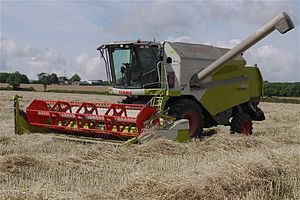 A combine harvester on an English farm

In the U.S. of the 1930s, one farmer fed only himself and three other consumers. The same farmer now feeds well over a hundred people. However, some authors consider this estimate as flawed as it does not take into account that farming requires energy and many other resources which have to be provided by additional workers, so that the ratio of people fed to farmers is actually smaller than 100 to 1.[5]

More distinct terms are commonly used to denote farmers who raise specific domesticated animals. For example, those who raise grazing livestock, such as cattle, sheep, goats, and horses, are known as ranchers (U.S.), graziers (Australia & U.K.), or simply stockmen. Sheep, goat, and cattle farmers might also be referred to respectively as shepherds, goatherds, and cowherds. The term dairy farmer is applied to those engaged primarily in milk production, whether from cattle, goats, sheep, or other milk producing animals. A poultry farmer is one who concentrates on raising chickens, turkeys, ducks, or geese, for either meat, egg, or feather production, or commonly, all three. A person who raises a variety of vegetables for market may be called a truck farmer or market gardener. Dirt farmer is an American colloquial term for a practical farmer, or one who farms his own land.[6]

In developed nations, a farmer (as a profession) is usually defined as someone with an ownership interest in crops or livestock, and who provides land or management in their production. Those who provide only labor are most often called farmhands. Alternatively, growers who manage farmland for an absentee landowner, sharing the harvest (or its profits) are known as sharecroppers or sharefarmers. In the context of agribusiness, a farmer is defined broadly, and thus many individuals not necessarily engaged in full-time farming can nonetheless legally qualify under agricultural policy for various subsidies, incentives, and tax deductions. 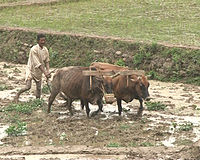 In the context of developing nations or other pre-industrial cultures, most farmers practice a meager subsistence agriculture—a simple organic farming system employing crop rotation, seed saving, slash and burn, or other techniques to maximize efficiency while meeting the needs of the household or community. Historically, one subsisting in this way may have been known as a peasant.

In developed nations, however, a person using such techniques on small patches of land might be called a gardener and be considered a hobbyist. Alternatively, one might be driven into such practices by poverty or, ironically—against the background of large-scale agribusiness—might become an organic farmer growing for discerning consumers in the local food market.

Farmers are often members of local, regional, or national farmers' unions or agricultural producers' organizations and can exert significant political influence. The Grange movement in the United States was effective in advancing farmers' agendas, especially against railroad and agribusiness interests early in the 20th century. The FNSEA is very politically active in France, especially pertaining to genetically modified food. Agricultural producers, both small and large, are represented globally by the International Federation of Agricultural Producers (IFAP), representing over 600 million farmers through 120 national farmers' unions in 79 countries.[7]

Farmed products might be sold either to a market, in a farmers' market, or directly from a farm. In a subsistence economy, farm products might to some extent be either consumed by the farmer's family or pooled by the community.

There are several occupational hazards for those in agriculture; farming is a particularly dangerous industry.[8] Farmers can encounter and be stung or bitten by dangerous insects and other arthropods, including scorpions, fire ants, bees, wasps, and hornets.[9]