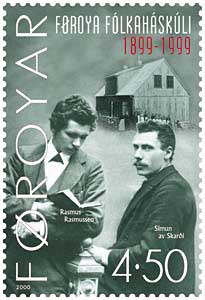 In the Middle Ages many poems and stories were handed down orally. These works were split into the following divisions: sagnir (historical), ævintyr (stories) and kvæði (ballads, traditionally sung along with the Faroese chain dance, in modern times also used in modern Faroese music). These kvæði were eventually written down in the 19th century, they are still used in the Faroese dance without any use of instruments.

Faroese literature in the traditional sense of the word has only really developed in the past 100–200 years. This is mainly because of the islands' isolation, and also because the Faroese language was not written down in a standardised format until 1890. The Danish language was also encouraged at the expense of Faroese. Nevertheless, the Faroes have produced several authors and poets. In the early 19th century the liberalist Nólsoyar Páll - Poul Poulson Nólsoy tried to end the trading monopoly that was affecting the islands. He wrote many poems, including his most famous work Fuglakvæði. Other poets include the brothers Janus and Hans Andreas Djurhuus, and Rói Patursson. Other famous authors from the Faroes include Heðin Brú (The Old Man and His Sons), Jørgen-Frantz Jacobsen (who wrote in Danish) (known for his sole novel Barbara) and William Heinesen (The Black Cauldron, who also wrote in Danish).

Both Heinesen and Patursson have been awarded The Nordic Council's Literature Prize.