Fashion in the Soviet Union 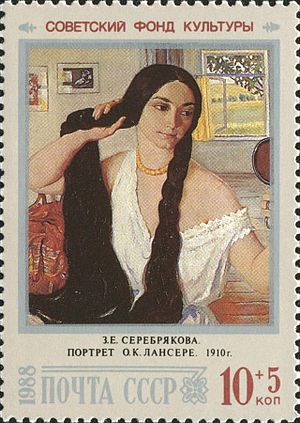 Fashion in the Soviet Union largely followed general trends of the Western world. However, the state’s socialist ideology consistently moderated and influenced these trends. In addition, shortages of consumer goods meant that the general public did not have ready access to pre-made fashion.

The New Economic Policy’s authorization of private business allowed Western fashion to enter the Soviet Union.[1] However, Bolshevik ideology opposed Western fashion consumption as an intrinsically capitalist practice. Western fashion emphasized both economic status and gender differences under a system that sought to deemphasize both.[2]

In the early 1920s, Party-sanctioned magazines like Rabotnitsa ("The Working Woman") and Krest’yanka ("The Peasant Woman") offered discourse on fashion. Covers displayed women in plain work clothes, yet the magazines often contained advertisements for private companies selling stylish attire.[3] By 1927, however, the magazines’ message was consistent: women should be judged on their capability for work, not their appearance. Fashion, as a beauty aid, was therefore bourgeois and detrimental to socialist society.[4]

In its place, the state commissioned projects to engineer a new Soviet type of dress, which drew on traditional clothing, constructivist forms, and technological facility.[2] Constructivists like Varvara Stepanova and Alexander Rodchenko agreed that fashion driven by the market was inherently harmful.[5] They employed the simple geometry of cubism to design clothing that was functional, easily mass-produced, and sometimes unisex.[6] Due to lack of adequate material and machinery, however, this prozodezhda, or "production clothing", did not appeal to the proletariat audience for which it was intended.[7] Designs were only available to the most privileged members of the intelligentsia, who ultimately preferred Western fashion to the highly experimental prozodezhda.[8]

During the Stalin era, anti-fashion sentiments dissipated. Party-sanctioned magazines now promoted fashion and beauty as necessary parts of a Soviet woman’s life. Rabotnitsa included fashion advice in almost every issue and regularly reported on new fashion houses opening across the Soviet Union.[9] Krest’yanka even organized traveling shows to bring fashion to the countryside.[10] The promoted aesthetics were highly varied, ranging from urban polish to ornate decoration.[11][12]

This new interest in fashion was connected to Joseph Stalin’s assertion that "life has become better and more cheerful".[13] Persistent images of plain women and quaint peasants were thought to propagate the capitalist view that socialism engenders poverty.[9] Fashionable and beautiful clothes were a signal of culture and quality of life equal (or superior) to that under capitalism. Stakhanovites, as foremost examples of successful workers, were expected to adhere to particularly high standards of appearance. They were often photographed wearing fine clothing even as they went to the factory.[13]

In reality, the touted fashions were beyond most citizens’ means. Soviet industry was unable to produce fashionable clothing in significant quantity, and what did exist was not available for general sale.[14] During World War II, the Soviet fashion industry went on hiatus.[15] If the average Soviet citizen desired a particularly stylish item of clothing, they were usually forced to commission a private tailor.[16] Day-to-day fashion was often self-produced, and magazines consistently advised women to take a do-it-yourself approach to their appearance.[17]

The Khrushchev Thaw brought a greater representation of Western fashion to domestic media. Journalists were sent abroad to report on the latest international fashion trends.[18] However, state-owned fashion institutions and magazines moderated these trends for Soviet audiences. Fashion "crazes" were rejected in favor of classic, long-running styles.[19] In addition, moderation and modesty were stressed.[20] Coco Chanel’s signature style, for example, was particularly admired as a symbol of timelessness and simple sophistication.[21] An article in the New York Times from 1959 slammed Soviet fashions as unremarkable, "clumsy copies" of outdated Western forms.[22] Availability of these styles, however, was on the rise. Shops like the newly reopened GUM department store now carried the new fashions, albeit at high prices.[23]

The state’s new approach towards fashion was carefully calculated. The promotion of exorbitant fashion that occurred in the Stalin era, and the contrast to actual availability, had led to public resentment. In the Khrushchev era, the state-owned clothing industry was still unable to produce mass amounts of fashionable clothing.[24] However, simplified fashions, rejection of excess, and high prices gave the industry a measure of control over consumer demand.[23] By the early 1960s, the middle class’s standards of appearance had risen such that Moscow street fashion was nearly indistinguishable from that in a Western city.[25]

At the same time, counterculture fashion movements grew among elite youths. The stilyagi, or "style hunters", originally based their look on media portrayals of Western (especially American) fashions. Men wore items such as Hawaiian shirts, sunglasses, narrow slacks, and pointed shoes, while female stilyagi wore miniskirts and maintained a childlike demeanor. These styles were labeled as "excessive", and Komsomol groups would sometimes raid stilyagi hideouts and cut off their hair and pant legs.[26]

By the end of the 1960s, Soviet fashion institutions, like the centralized fashion bureau ODMO (All-Union House of Prototypes), were embracing increasingly novel Western trends.[27] At the same time, there was still a need to establish distinctively Soviet fashions. "Space fashion," for example, fit directly into state ideology by glorifying a triumph of Soviet science.[28]

Reality, however, differed from ODMO’s designs. Soviet industry could not keep up with the demand for fashionable goods, and supply in USSR shops was worse than in other socialist countries.[29] The public was also dissatisfied with the available items. For example, Soviet women so disliked promoted designs involving Russian ethnic prints that the style ultimately became more popular in the West than in the Soviet Union itself.[30]

The middle class increasingly idealized Western fashion, as it was visible but not easily obtainable.[31] American-made blue jeans were an especially desirable item.[32] Secondhand stores were one source of Western fashion, as visitors from the West could import goods and sell them for high profits. The retail chain Beriozka also sold some Western clothing, but only to the privileged few who could pay in hard currency or foreign exchange certificates. Foreign exchange certificates and Western clothing were also available on the black market.[33]

Under perestroika, varied fashion became acceptable. In 1987, Gorbachev allowed a Russian edition of Burda Fashion magazine to be produced and distributed.[34] The next year, Zhurnal Mod began a new run as the first "proper" fashion magazine in the Soviet Union. In content, it was virtually indistinguishable from a Western fashion magazine, although ODMO provided all the styles.[35]

When the nineteenth party conference met in the summer of 1989, they passed a resolution to increase the production of consumer goods. Fashionable clothes were mentioned specifically in the proceedings.[36] Despite advocates for fashion at the highest level of bureaucracy, real changes in production failed to take place. The Ministry of Light Industries set quotas for the creation of new products, but textile factories recycled older patterns and products instead.[37]

Meanwhile, relaxation of censorship under glasnost made the middle class even more aware of their Western counterparts. They felt that they deserved fashionable clothing as a status symbol, but still could not easily obtain it.[38]