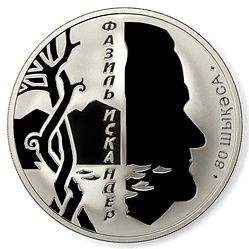 Reverse side of a 10 apsar commemorative coin minted on 6 May 2009 to celebrate Fazil Iskander's 80th birthday.

Fazil Abdulovich Iskander was born in 1929 in the cosmopolitan port city of Sukhum, the capital of Abkhazia (then part of the USSR) to an Iranian father (Abdul Ibragimovich Iskander) and an Abkhazian mother (Leili Khasanovna Iskander).[1] Of Iranian descent, his father Abdul Iskander was deported to Iran in 1938 and sent to a penal camp where he died in 1957.[2] He was the victim of Joseph Stalin's genocide policies against the national minorities of the Caucasus.[1] As a result, he and his brother Feredun and his sister Giuli were raised by his mothers Abkhazian family.[1][2] Fazil was only nine years old at that time.[3]

The most famous intellectual of Abkhazia, he first became well known in the mid-1960s along with other representatives of the "young prose" movement like Yury Kazakov and Vasily Aksyonov, especially for what is perhaps his best story,[4] Sozvezdie kozlotura (1966), variously translated as "The Goatibex Constellation," "The Constellation of the Goat-Buffalo," and "Constellation of Capritaurus." It is written from the point of view of a young newspaperman who returns to his native Abkhazia, joins the staff of a local newspaper, and is caught up in the publicity campaign for a newly produced farm animal, a cross between a goat and a West Caucasian tur (Capra caucasica); a "remarkable satire of Lysenko's genetics and Khrushchev's agricultural campaigns, it was harshly criticized for showing the Soviet Union in a bad light."[5]

He is probably best known in the English speaking world for Sandro of Chegem, a picaresque novel that recounts life in a fictional Abkhaz village from the early years of the 20th century until the 1970s, which evoked praise for the author as "an Abkhazian Mark Twain."[6] Mr. Iskander's humor, like Mark Twain's, has a tendency to sneak up on you instead of hitting you over the head.[6] This rambling, amusing and ironic work has been considered as an example of magic realism, although Iskander himself said he "did not care for Latin American magic realism in general".[7] Five films were made based upon parts of the novel.

Iskander distanced himself from the Abkhaz secessionist strivings in the late 1980s and criticised both Georgian and Abkhaz communities of Abkhazia for their ethnic prejudices.[citation needed] He warned that Abkhazia could become a new Nagorno-Karabakh.[citation needed] He currently resides in Moscow and is a writer for the newspaper Kultura.

On 3 September 2011, a statue of Iskander's literary character Chik was unveiled on Sukhumi's Muhajir Quay.[8] 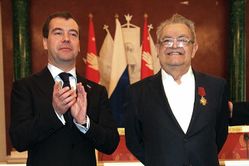 Iskander being awarded the Order of Merit for the Fatherland by President Dmitry Medvedev, 2010.

In 2009, Bank of Abkhazia issued a commemorative silver coin from the series "Outstanding Personalities of Abkhazia", dedicated to Fazil Iskander denomination of 10 apsaras.