Fear mongering is the deliberate use of fear based tactics including exaggeration and continual repetition to alter the perception of the public in order to achieve a desired outcome.[citation needed] 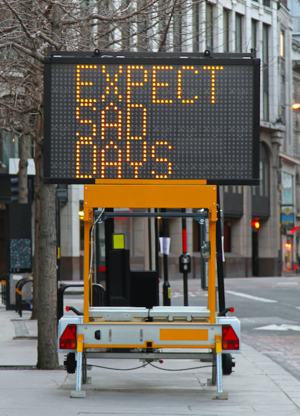 An example of "fear mongering" used through a sign

Probably the best-known example in American politics, pre-9/11, is the Daisy television commercial, a famous campaign television advertisement beginning with a barefoot little girl standing in a meadow with chirping birds, picking the petals of a daisy while counting each petal slowly. When she reaches "9", an ominous-sounding male voice is then heard counting down a missile launch, and as the girl's eyes turn toward something she sees in the sky, the camera zooms in until her pupil fills the screen, blacking it out. When the countdown reaches zero, the blackness is replaced by the flash and mushroom cloud of a nuclear explosion.

As the firestorm rages, a voice-over from President Johnson states, "These are the stakes! To make a world in which all of God's children can live, or to go into the dark. We must either love each other, or we must die". Another voice-over then says, "Vote for President Johnson on November 3. The stakes are too high for you to stay home".[1] 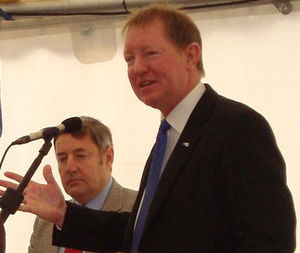 New Zealand politician Nick Smith accused Ken Ring of scaremongering in 2011: "Frankly what Mr Ring is doing is no better than people crying fire without cause in a packed stadium or picture theatre." – March 2011[2]

Advertisers have also entered the arena with their discovery that "fear sells". Ad campaigns based on fear, sometimes referred to as shockvertising, have become increasingly popular in recent years. Fear is a strong emotion and it can be manipulated to steer people into making emotional rather than reasoned choices. From car commercials that imply that having fewer airbags will cause your family harm, to disinfectant commercials that show bacteria lurking on every surface, fear-based advertising works.[3] While using fear in ads has generated some negative reactions by the public, there is evidence to show that "shockvertising" is a highly effective persuasion technique, and over the last several years, advertisers have continued to increase their usage of fear in ads in what has been called a "never-ending arms race in the advertising business".[4]

Author Ken Ring was accused of scaremongering by New Zealand politician Nick Smith. The Auckland seller of almanacs made predictions about earthquakes and weather patterns based on lunar cycles, and some of his predictions were taken seriously by some members of the public in connection with the 2011 earthquakes in Christchurch, New Zealand.[5]