The FSKN shared concurrent jurisdiction with the Federal Security Service of Russia and MVD. The FSKN also has sole responsibility for coordinating and pursuing Russian drug investigations abroad, especially in Central Asia.

On April 5, 2016 the Federal Drug Control Service was dissovled, and its functions and authorities are transferred to Main Drugs Control Directorate of the Ministry of Internal Affairs.[3]

The first Anti-Drugs Independent Russian Agency was born on 24 September 2002 under the name "The State Committee for Combat the Illicit Trafficking in Narcotic Drugs and Psychotropic Substances under the Ministry of Internal Affairs of the Russian Federation" (UNON MVD).

On March 11, 2003 the State Committee for combat the illicit trafficking in narcotic drugs and psychotropic substances under the Ministry of Internal Affairs of the Russian Federation was transformed into the State Committee of Russian Federation to Monitor the Trafficking of Narcotic Drugs and Psychotropic Substances (GOSNARCOCONTROL). That organization eventually became the Federal Drug Control Service of Russia. Viktor Cherkesov was appointed to the chairman of the committee. The Committee passed the material base and the majority (40,000 units), staff number of the abolished Federal Tax Police Service of the Russian Federation. The Committee began its operations on July 1, 2003.

On June 1, 2016 the FSKN will be replaced by the Main Directorate for Drugs Control of the Ministry of Internal Affairs of the Russian Federation. 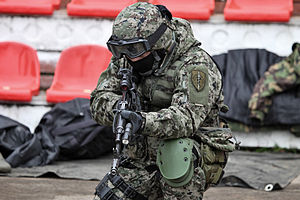 The main tasks of Russian Federal Drug Control Service are:

On February 16, 2008 the Decree of Russian President Vladimir Putin, the day on March 11 announced the official professional holiday - the Day of Drug Control Authorities.

Criticism of the organization is related to legal collisions. For example, in 2004, the use of analgesic medication ketamine has been explicitly forbidden for use in veterinary clinics after it has been qualified as a drug of abuse. Veterinarians, to alleviate the suffering of animals, broke the law as a result of a conflict between the legal and moral implications. The most "sensational" case was the process of Alexandra Duque.

Criticism is also drawn by the Federal Drug Control Service supposedly rigging results of substance inspections (for example, identifying UR-144 as JWH-018 and finding drugs that were never there), improper scheduling (such as qualifying Modafinil as a cocaine substitute) and using very vague and unspecific drug analog laws

Two famous films were made in Russia about and paid by it: