Some banks also possess branches, with the whole system being headquartered at the Eccles Building in Washington, D.C.

Alexander Hamilton, the first Secretary of Treasury, started a movement in 1780 advocating for the creation of a central bank.[lower-alpha 1] The Bank Bill created by Hamilton was a proposal to institute a national bank in order to improve the economic stability of the nation after its independence from Britain. Although the national bank was to be used as a tool for the government, it was to be privately owned. Hamilton wrote several articles providing information regarding his national bank idea where he expressed the validity and "would be" success of the national bank based upon: incentives for the rich to invest, ownerships of bonds and shares, being rooted in fiscal management, and stable monetary system.

A financial crisis known as the Panic of 1907 was headed off by a private conglomerate (led by J. P. Morgan), who set themselves up as "lenders of last resort" to banks in trouble.[3][1] This effort succeeded in stopping the panic,[3] and led to calls for a Federal agency to do the same thing.[citation needed]

In response to this,[citation needed] the Federal Reserve System was created by the Federal Reserve Act of December 23, 1913, establishing a new central bank intended to serve as a formal "lender of last resort" to banks in times of liquidity crisis—panics where depositors tried to withdraw their money faster than a normal fractional-reserve-based bank could pay it out.

The Federal Reserve Act presented by Congressman Carter Glass and Senator Robert L. Owen incorporated modifications by Woodrow Wilson and allowed for a regional Federal Reserve System, operating under a supervisory board in Washington, D.C. Congress approved the Act, and President Wilson signed it into law on December 23, 1913. The Act, "Provided for the establishment of Federal Reserve Banks, to furnish an elastic currency, to afford means of rediscounting commercial paper, to establish a more effective supervision of banking in the United States, and for other purposes. The Act provided for a Reserve Bank Organization Committee that would designate no less than eight but no more than twelve cities to be Federal Reserve cities, and would then divide the nation into districts, each district to contain one Federal Reserve City.

The legislation provided for a system that included a number of regional Federal Reserve Banks and a seven-member governing board. All national banks were required to join the system and other banks could join.

On April 2, 1914, the Reserve Bank Organization Committee announced its decision, and twelve Federal Reserve banks were established to cover various districts throughout the country. Those opposed to the establishment of an overwhelmingly powerful New York Fed prevailed in their desire that its scope and influence should be limited. Initially, this bank's influence was restricted to New York State. Nonetheless, with over $20,000,000 in capital stock, the New York Bank had nearly four times the capitalization of the smallest banks in the system, such as Atlanta and Minneapolis. As a result, it was impossible to prevent the New York Fed from being the largest and most dominant bank in the system.

The Federal Reserve Banks opened for business in November 1914. The New York Fed opened for business under the leadership of Benjamin Strong, Jr. , previously president of the Bankers Trust Company, on November 16, 1914. The initial staff consisted of seven officers and 85 clerks, many on loan from local banks. Mr. Strong recalled the starting days at the Bank in a speech: "It may be said that the Bank's equipment consisted of little more than a copy of the Federal Reserve Act." During its first day of operation, the Bank took in $100 million from 211 member banks; made two rediscounts; and received its first shipment of Federal Reserve Notes. Congress created Federal Reserve notes to provide the nation with a flexible supply of currency. The notes were to be issued to Federal Reserve Banks for subsequent transmittal to banking institutions in accordance with the needs of the public.

The U.S. Federal Reserve System or the “Fed” (of which the twelve regional Federal Reserve banks are a part) was created by an Act of Congress in 1913 in a response to a series of economic crises at the turn of the early 20th century.

The Bank's staff grew rapidly during the early years, necessitating the need for a new home. Land was bought on a city block encompassing Liberty Street, Maiden Lane, William Street and Nassau Street. A public competition was held and the architectural firm of York & Sawyer submitted the winning design reminiscent of the palaces in Florence, Italy. The Bank's vaults, located 86 feet below street level, were built on Manhattan's bedrock. In 1924, the Fed moved into its new home. By 1927, the vault contained ten percent of the world's entire store of monetary gold.[4]

The Fed is an independent financial institution formed within the United States, that works separately from the executive or judicial branches of government. The Federal Reserve System is considered to be an independent agency that exists outside of the cabinet of the executive[5] and its powers are derived directly from Congress. Over the past century, the Fed’s power has expanded from its original roles such as a private response to problems in banking systems[6] and to establishing a more effective supervisory role of banking systems in the United States,[6] to its now current position of being a lender of last resort to banking institutions that require additional credit to stay afloat.

The twelve regional Federal Reserve Banks were established as the operating arms of the nation's central banking system. They are organized much like private corporations—possibly leading to some confusion about ownership.

Regarding the structural relationship between the twelve Federal Reserve banks and the various commercial (member) banks, political science professor Michael D. Reagan has written that:[9]

... the "ownership" of the Reserve Banks by the commercial banks is symbolic; they do not exercise the proprietary control associated with the concept of ownership nor share, beyond the statutory dividend, in Reserve Bank "profits." ... Bank ownership and election at the base are therefore devoid of substantive significance, despite the superficial appearance of private bank control that the formal arrangement creates.

Confidence in the soundness of the banking and financial systems is what mobilizes a society's savings, allows the savings to be channeled into productive investments, and encourages economic growth.

The Federal Reserve Banks conduct ongoing internal audits of their operations to ensure that their accounts are accurate and comply with the Federal Reserve System's accounting principles. The banks are also subject to two types of external auditing. Since 1978 the Government Accountability Office (GAO) has conducted regular audits of the banks' operations. The GAO audits are reported to the public, but they may not review a bank's monetary policy decisions or disclose them to the public.[14] Since 1999 each bank has also been required to submit to an annual audit by an external accounting firm,[15] which produces a confidential report to the bank and a summary statement for the bank's annual report. Some members of Congress continue to advocate a more public and intrusive GAO audit of the Federal Reserve System,[16] but Federal Reserve representatives support the existing restrictions to prevent political influence over long-range economic decisions.[17] 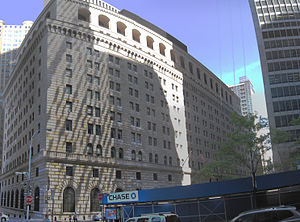 The Federal Reserve Bank of New York has over $2 trillion in assets.

The New York Federal Reserve district is the largest by asset value. San Francisco, followed by Kansas City and Minneapolis, represent the largest geographical districts. Missouri is the only state to have two Federal Reserve Banks (Kansas City and St. Louis). California, Florida, Missouri, Ohio, Pennsylvania, Tennessee, and Texas are the only states which have two or more Federal Reserve Bank branches seated within their states, with Missouri, Pennsylvania, and Tennessee having branches of two different districts within the same state. In the 12th District, the Seattle Branch serves Alaska, and the San Francisco Bank serves Hawaii. New York, Richmond, and San Francisco are the only banks that oversee non-U.S. state territories. The System serves these territories as follows: the New York Bank serves the Commonwealth of Puerto Rico and the U.S. Virgin Islands; the Richmond Bank serves the District of Columbia; the San Francisco Bank serves American Samoa, Guam, and the Commonwealth of the Northern Mariana Islands. The Board of Governors last revised the branch boundaries of the System in February 1996.[18]