Federalism in the United States 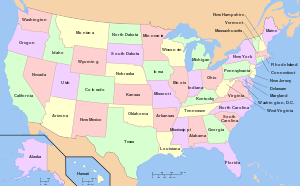 The United States is composed of fifty self-governing states and several territories.

Federalism in the early Republic

Federalism was a political solution for the problems with the Articles of Confederation which gave little practical authority to the federal government. For example, the Articles allowed the Continental Congress the power to sign treaties and declare war, but it could not raise taxes to pay for an army and all major decisions required a unanimous vote.[1]

The movement was greatly strengthened by the reaction to Shays' Rebellion of 1786–1787, which was an armed uprising of yeoman farmers in western Massachusetts. The rebellion was fueled by a poor economy that was created, in part, by the inability of the federal government to deal effectively with the debt from the American Revolutionary War. Moreover, the federal government had proven incapable of raising an army to quell the rebellion, so that Massachusetts had been forced to raise its own.

In 1787, fifty-five delegates met at a Constitutional convention in Philadelphia and generated ideas of a bicameral legislature (United States Congress), balanced representation of small and large states (Great Compromise), and checks and balances. James Madison stated in a long pre-convention memorandum to delegates that because "one could hardly expect the state legislatures to take enlightened views on national affairs", stronger central government was necessary.[2] This convention almost immediately dropped its original mandate and instead set about constructing a new Constitution of the United States. Once the convention concluded and released the Constitution for public consumption, the Federalist movement became focused on getting the Constitution ratified.

The most forceful defense of the new Constitution was The Federalist Papers, a compilation of 85 anonymous essays published in New York City to convince the people of the state to vote for ratification. These articles, written by Alexander Hamilton and James Madison, with some contributed by John Jay, examined the benefits of the new, proposed Constitution, and analyzed the political theory and function behind the various articles of the Constitution. The Federalist Papers remains one of the most important documents in American political science.[3]

Those opposed to the new Constitution became known as the "Anti-Federalists". They generally were local rather than cosmopolitan in perspective, oriented to plantations and farms rather than commerce or finance, and wanted strong state governments and a weak national government. The Anti-Federalist critique soon centered on the absence of a bill of rights, which Federalists promised to provide.

Because George Washington lent his prestige to the Constitution and because of the ingenuity and organizational skills of its proponents, the Constitution was ratified by all the states. The outgoing Congress of the Confederation scheduled elections for the new government, and set March 4, 1789 as the date that the new government would take power. In 1789, Congress submitted twelve articles of amendment to the states. Ten of these articles, written by congressional committees, achieved passage on December 15, 1791 and became the United States Bill of Rights. The Tenth Amendment set the guidelines for federalism in the United States.

As soon as the first Federalist movement dissipated, a second one sprang up to take its place. This one was based on the policies of Alexander Hamilton and his allies for a stronger national government, a loose construction of the Constitution, and a mercantile (rather than agricultural) economy. As time progressed, the factions which adhered to these policies organized themselves into the nation's first political party, the Federalist Party, and the movement's focus and fortunes began to track those of the party it spawned.

The movement reached its zenith with the election of an overtly Federalist President, John Adams. However, with the defeat of Adams in the election of 1800 and the death of Hamilton, the Federalist Party began a long decline from which it never recovered. What finally finished off the Federalist party was the Hartford Convention of 1814, in which five New England states gathered to discuss several constitutional amendments necessary to protect New England's interests in regards to the blockade of their ports by the British during the War of 1812. The threat of secession was also proposed during these secret meetings. Three delegates were sent to Washington, DC to negotiate New England's terms only to discover the signing of the Treaty of Ghent, ending the war with the British. The Federalists were then seen by many as traitors to the union.[4]

Federalism under the Marshall Court

The United States Supreme Court under Chief Justice John Marshall played an important role in defining the power of the federal and state governments during the early 19th century. As the U.S. Constitution does not specifically define many dividing lines between the layers of government, the Supreme Court settled the issue in New York. The question was answered particularly in the cases, McCulloch v. Maryland and Gibbons v. Ogden, which broadly expanded the power of the national government.

Despite Chief Justice Marshall's strong push for the federal government, the court of his successor, Roger B. Taney (1835–1863), decided cases that favored equally strong national and state governments. The basic philosophy during this time was that the U.S. Government ought to be limited to its enumerated powers and that all others belonged to the states. Both the sixteenth and the seventeenth amendment bolstered the power of the national government, and divided state and federal power.

Between Dual Federalism and the New Deal

Following the Taney court and the rise of Dual federalism, the division of labor between federal, state, and local governments was relatively unchanged for over a century. Political scientist Theodore J. Lowi summarized the system in place during those years in The End of the Republican Era[5]

Nevertheless, the modern federal apparatus owes its origins to changes that occurred during the period between 1861 and 1933. While banks had long been incorporated and regulated by the states, the National Bank Acts of 1863 and 1864 saw Congress establish a network of national banks that had their reserve requirements set by officials in Washington. During World War I, a system of federal banks devoted to aiding farmers was established, and a network of federal banks designed to promote home ownership came into existence in the last year of Herbert Hoover's administration. Congress used its power over interstate commerce to regulate the rates of interstate (and eventually intrastate) railroads and even regulated their stock issues and labor relations, going so far as to enact a law regulating pay rates for railroad workers on the eve of World War I. During the 1920s, Congress enacted laws bestowing collective bargaining rights on employees of interstate railroads and some observers dared to predict it would eventually bestow collective bargaining rights on persons working in all industries. Congress also used the commerce power to enact morals legislation, such as the Mann Act of 1907 barring the transfer of women across state lines for immoral purposes, even as the commerce power remained limited to interstate transportation—it did not extend to what were viewed as intrastate activities such as manufacturing and mining.

As early as 1913, there was talk of regulating stock exchanges, and the Capital Issues Committee formed to control access to credit during World War I recommended federal regulation of all stock issues and exchanges shortly before it ceased operating in 1921. With the Morrill Land-Grant Acts Congress used land sale revenues to make grants to the states for colleges during the Civil War on the theory that land sale revenues could be devoted to subjects beyond those listed in Article I, Section 8 of the Constitution. On several occasions during the 1880s, one house of Congress or the other passed bills providing land sale revenues to the states for the purpose of aiding primary schools. During the first years of twentieth century, the endeavors funded with federal grants multiplied, and Congress began using general revenues to fund them—thus utilizing the general welfare clause's broad spending power, even though it had been discredited for almost a century (Hamilton's view that a broad spending power could be derived from the clause had been all but abandoned by 1840).

During Herbert Hoover's administration, grants went to the states for the purpose of funding poor relief. The Supreme Court began applying the Bill of Rights to the states during the 1920s even though the Fourteenth Amendment had not been represented as subjecting the states to its provisions during the debates that preceded ratification of it. The 1920s also saw Washington expand its role in domestic law enforcement. Disaster relief for areas affected by floods or crop failures dated from 1874, and these appropriations began to multiply during the administration of Woodrow Wilson (1913–21). By 1933, the precedents necessary for the federal government to exercise broad regulatory power over all economic activity and spend for any purpose it saw fit were almost all in place. Virtually all that remained was for the will to be mustered in Congress and for the Supreme Court to acquiesce.[6]

Lowi notes[7] that this division of labor was changed dramatically with the advent of the New Deal, and three Supreme Court cases that validated the shift in power:

The Great Depression marked an abrupt end to Dual Federalism and a dramatic shift to a strong national government. President Franklin D. Roosevelt's New Deal policies reached into the lives of U.S. citizens like no other federal measure had. As the Supreme Court had rejected nearly all of Roosevelt's economic proposals, the president proposed the Judicial Procedures Reform Bill of 1937 to add more members. The expansion of the Court along with a Democrat-controlled Congress would tilt Court rulings in favor of Roosevelt's policies.[8] Lowi notes three Supreme Court cases that validated the shift in power:[9]

The national government was forced to cooperate with all levels of government to implement the New Deal policies; local government earned an equal standing with the other layers, as the federal government relied on political machines at a city level to bypass state legislatures. The formerly distinct division of responsibilities between state and national government had been described as a "layer cake," but, with the lines of duty blurred, cooperative federalism was likened to a "marble cake" or a "picket fence." In cooperative federalism, federal funds are distributed through grants in aid or categorical grants which gave the federal government more control over the use of the money.

Another movement calling itself "New Federalism" appeared in the late 20th century and early 21st century. New Federalism, which is characterized by a gradual return of power to the states, was initiated by President Ronald Reagan (1981–89) with his "devolution revolution" in the early 1980s and lasted until 2001. Previously, the federal government had granted money to the states categorically, limiting the states to use this funding for specific programs. Reagan's administration, however, introduced a practice of giving block grants, freeing state governments to spend the money at their own discretion.

New Federalism is sometimes called "states' rights", although its proponents usually eschew the latter term because of its associations with Jim Crow and segregation. Unlike the states' rights movement of the mid-20th century which centered on the civil rights movement, the modern federalist movement is concerned far more with expansive interpretations of the Commerce Clause, as in the areas of medical marijuana (Gonzales v. Raich), partial-birth abortion (Gonzales v. Carhart), gun possession (United States v. Lopez), federal police powers (United States v. Morrison, which struck down portions of the Violence Against Women Act), or agriculture (Wickard v. Filburn).