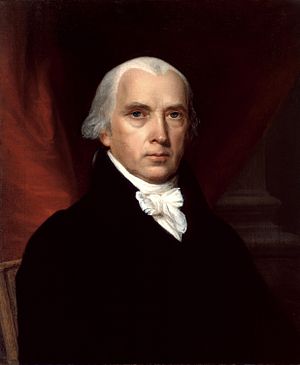 James Madison, author of Federalist No. 51

Federalist No. 51, titled: The Structure of the Government Must Furnish the Proper Checks and Balances Between the Different Departments, is an essay by James Madison, the fifty-first of The Federalist Papers. It was published on February 6, 1788, under the pseudonym Publius, the name under which all The Federalist Papers were published. One of the most famous of The Federalist Papers, No. 51 addresses means by which appropriate checks and balances can be created in government and also advocates a separation of powers within the national government. One of its most important ideas is the often quoted phrase, "Ambition must be made to counteract ambition".

The Federalist Papers, as a foundation text of constitutional interpretation, are frequently cited by American jurists. Of all the essays, No. 51 is the fourth most-cited.[1]

The purpose of No. 51 is, according to Madison, to inform the reader of the safeguards created by the convention to maintain the separate branches of government, and to protect the rights of the people and of the country.

Madison's key point is that the members of each department should have as little dependence as possible on the members of the other departments, and to stay independent, their own department must not encroach on the others. To secure these ends, Madison suggests that "the great security against a gradual concentration of the several powers in the same department" is to enable each department (or the leader of the department) to fend off attempts to encroach upon the government of each other's departments.[2]

In a republican form of government, Madison asserts, the legislative branch is the strongest, and therefore must be divided into different branches, be as little connected with each other as possible, and render them by different modes of election. He deems the legislative branch to be the strongest since it is essentially the true voice of the people. (Before the Seventeenth Amendment, only the House of Representatives was chosen directly by the people, the Senate was by state legislatures.) He stresses the need for the checks and balances.

The government is guarded from usurpations because it is divided into distinct and separate departments.

In 1788, power over people was divided both through federalism (between the federal government and the state governments) and through branches (legislative, executive, and judicial) within the national (or federal) government. Because of the division of power, a "double security arises to the rights of the people. The governments will control each other, at the same time that each will be controlled by itself".[3]

Madison discusses at great length at the end the issue of political factions. He recognizes that factions will always be present and that the only way to counteract the effects of factions is to have numerous factions. In other words, even if individuals mingle with other members of the same social groups, ideals, and goals, no particular group should be able to become so strong as to thwart the interest of all other groups. No faction can become large enough to overthrow all other factions in a well-run republic.

Factions had been further discussed in Federalist No. 10.