The Fedorov Avtomat (also anglicized as Federov,[2][3] Russian: Автомат Фёдорова) was an automatic rifle, designed by Vladimir Grigoryevich Fyodorov in 1915 and produced in the Russian Empire and later in the Russian Soviet Federative Socialist Republic. A total of 3,200 Fedorov rifles were manufactured between 1915 and 1924 in the city of Kovrov; the vast majority of them were made after 1920. The weapon saw token combat in World War I, but was used more substantially in the Russian Civil War and in the 1939–1940 Soviet-Finnish war.

The Fedorov Avtomat is a short-recoil operated, locked-breech weapon which fires from a closed bolt. The bolt locking is achieved by two dumbbell-shaped locking plates, mounted at either side of the breech, latching barrel and bolt together through lugs on the bolt. Those plates are allowed to tilt slightly down after about 10 mm of free recoil, unlocking the bolt. A bolt hold-open device is fitted and the firing mechanism is of hammer type. 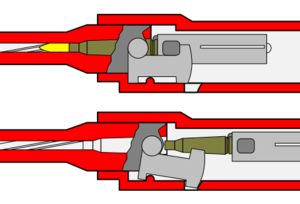 Captain V. Fedorov began a prototype of a semi-automatic rifle in 1906, working with future small arms designer Vasily Degtyaryov as his assistant. A model was submitted to the Rifle Commission of the Russian army in 1911, which eventually ordered 150 more rifles for testing. In 1913, Fedorov submitted a prototype automatic rifle with a stripper clip-fed fixed magazine, chambered for his own experimental rimless 6.5 mm cartridge, called the 6.5mm Fedorov. This new rimless ammunition was more compact than the rimmed Russian 7.62×54mmR, better suited for automatic weapons and produced less recoil. When fired from an 800 mm barrel, this experimental cartridge propelled a pointed jacketed bullet weighting 8.5 grams at an initial velocity of 860 m/s with a muzzle energy of 3,140 J as opposed to the 3,550 J muzzle energy of 7.62×54mmR ammunition from a barrel of the same length.[4] 6.5 mm Fedorov rifles were tested late in 1913 with favorable results.

In the autumn of 1915, Fedorov was posted as a military observer to France, in the Mont-Saint-Éloi sector. Here he was impressed by the ubiquity of the French Chauchat and by the firepower it brought, but less so about its mobility. According to Fedorov's memoirs, it is here he came up with idea of introducing into Russian service a weapon with firepower intermediate between the rifle and the light machine gun, but with mobility comparable to a rifle. His decision to adapt his semi-automatic rifle design for this purpose was one of wartime expediency. Fedorov set to the task upon his return to Russia in January 1916. He retained the mechanism of his semi-automatic rifle, with the major addition of a selective fire switch. The fixed magazine was replaced by a detachable, curved 25-round box magazine.[5]

Production of the new cartridge was out of question so it was decided to convert 6.5 mm Fedorov rifles to use the Japanese 6.5×50mmSR Arisaka ammunition which was in abundance, having been purchased from Japan and Great Britain along with Arisaka rifles. (About 763,000 Arisaka-type rifles were imported to Russia,[6][7] along with approximately 400 million cartridges for them; domestic production of the Arisaka cartridge remained insignificant though.[7]) The change of ammunition involved only minimal changes to the rifle, including a chamber insert and a new range scale for the rear sights.[8] The somewhat less powerful Japanese cartridge meant that the muzzle velocity was only about 654–660 m/s because of constrained barrel length.[1][8]

A US Army analysis from the early 1950s considered that the Fedorov Avtomat was unreasonably complex to manufacture and that it suffered from rapid overheating of the barrel on automatic fire.[1] Russian tests indicated that the gun could fire about 300 rounds continuously before heat buildup rendered it inoperable. This was still an improvement compared to the Mosin–Nagant M1891 rifles, which would begin to smolder after 100 rounds. The main factor in the increased heat dissipation was the metal shroud over the barrel at the end of the forearm, which acted as a radiator. In terms of accuracy, Russian data indicates that when fired in short bursts the Fedorov Avtomat could reliably hit targets having a profile of 0.6×0.5 m at a distance of 200 m. At 400 m the dispersion increased to 1.1×0.9 m and at 800 m it was 2.1×1.85 m. Consequently, burst fire was only considered effective up to about 500 m.[9]

Initially Fedorov wanted to call the class of weapons to which his new gun belonged ручное ружьё-пулемет (lit. "handheld light-machine-gun", i.e. a lighter class than ружьё-пулемет which denoted light machine guns like the Madsen), which reflected his tactical thinking behind the development of the weapon.[10] This designation appeared in a September 1916 article in the journal of the Artillery Commission.[11] Fedorov's superior, General N.M. Filatov (Н.М. Филатов), is credited for introducing the much shorter term "avtomat" for the gun—a neologism derived from the Greek word 'automaton' and synonymous with the English word "automatic",[12] this is the one that stuck. Written records of this new term being applied to the gun date to 1919.[13]

In contemporary Russian terminology, the word "avtomat" denotes assault rifle, although historically the term has had a broader meaning.[12] Contemporary Western writers have struggled to classify the Fedorov Avtomat. Some consider it to be an "early predecessor" or "ancestor" to the modern assault rifle,[3][14][15][16] while others believe that the Fedorov Avtomat was the world's first assault rifle, based on the argument that it was chambered in "one of the least powerful rifle-caliber cartridges then in use".[17][18][19] Still other writers argue that the Cei-Rigotti (which predates the Fedorov by 20 years) was the world's first assault rifle because, it was also chambered for an intermediate power 6.5 mm cartridge and also used a detachable 25-round magazine.[20][21]

In 1916, the Weapons Committee of the Russian Army made a decision to order no less than 25,000 Fedorov automatic rifles. In early 1918, the order for Fedorov rifles was limited to 9,000 weapons, but as result of turmoil of the Russian Revolution and the subsequent civil war, only 3,200 Fedorov rifles were manufactured in the city of Kovrov between 1920 and 1925, when production was finally stopped.[22] The gun's cost estimated in 1918 was 1,090 rubles; in comparison the cost of a Madsen light machine gun was around 1,730 rubles at that time.[23]

Following an order of the Chief of the General Staff, in the summer of 1916 a company from the 189th Izmail Regiment trained in tactics with the new weapon at the infantry school in Oranienbaum. The company was equipped with 8 Fedorov Avtomats. After completing their training, the company was deployed to the Romanian front in early 1917. It was supposed to report back valuable combat experience with the new weapon, but this did not happen because the company disintegrated during the Kerensky Offensive. About 10 other Avtomats were given to the Russian naval aviation; Grand Duke Alexander Mikhailovich of Russia telegraphed back that his pilots found it more suitable than the Chauchat in light aircraft.[24]

By 1920 only about 100 Fedorov Avtomats had been produced. That year, its production was encouraged by Kamenev, who saw the gun as very promising. Fedorov Avtomats then equipped Red Army units in the Karelian sector, particularly the ski battalion of Toivo Antikainen, during the Karelian Uprising. Reports from combat experiences with the gun during 1921–1922 were very positive as long as spare parts were available.[25] In 1923, 10,000 copies of a 46-page manual for the gun were printed.[26]

Despite some noted reliability issues and performance issues, the Fedorov Avtomat had been deemed acceptable for Red Army use in a 1924 review. However, owing to supply problems, in the same year, Soviet leadership decided to abandon all weapons using foreign ammunition. As a consequence, production of the Fedorov Avtomat was halted in October 1925. Subsequently it was withdrawn from service and put in storage; the last unit to give it up was the Moscow Proletariat Red Banner Rifle Division in 1928. During the 1939–1940 Soviet–Finnish war, an acute lack of individual automatic weapons led to the reintroduction of the stockpiled Fedorovs into service. They were sent to the Karelian front, mostly to military intelligence units.[22] It is assumed that most of the Fedorov Avtomats were expended during that war.[27]