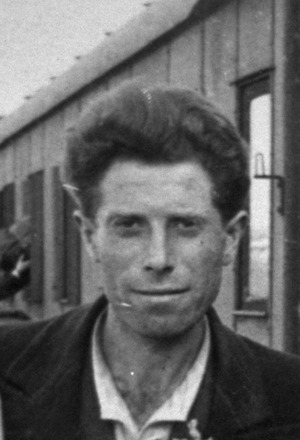 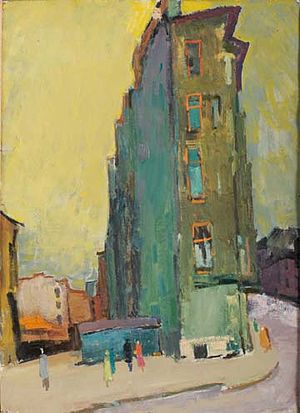 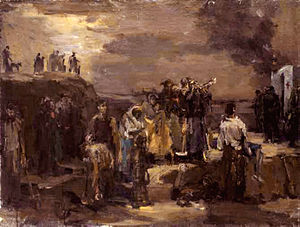 Felix Samoilovich Lembersky (Russian: Феликс Самойлович Лемберский)[1] (Lublin, Poland, November 11, 1913 – Leningrad, currently St. Petersburg, December 2, 1970) was a Russian/Soviet painter, artist, teacher, theater stage designer and an organizer of artistic groups.[1] A refugee of World War I, he grew up in Berdyczów (now Berdychiv, Ukraine) and studied art in Kiev and Leningrad—at the Jewish Arts and Trades School, known as Kultur-Lige (1928–29), the Kiev Art Institute (1933–34) and the Leningrad Academy of Art (1935–41). He graduated with high honors, completing his thesis during the Siege of Leningrad. He was wounded in the defense of Leningrad during World War II. His parents perished in Holocaust in Ukraine. After evacuation in 1942, LEMBERSKY spent two years working in the Urals, recording industrial war effort. After the war, LEMBERSKY joined the Leningrad Union of Artists (LOSKh, LOSSKh). He exhibited widely in national and privately organized art shows in Russia and his work was acquired by museums and private collectors. While living in Leningrad, he also toured and worked in the Urals, Ladoga, Pskov and Baltic Republics. Much of his art is inspired by the Eastern Europe of his childhood—Ukraine and Ukraine. Among his most moving images are the portraits of his fellow citizens and the places where he lived and visited.

LEMBERSKY's art is rooted in the early Soviet Avant-Garde, with which he became acquainted at Kultur-Lige and while working as a theater sets designer in Kiev in the 1920s and early 1930s. He was further exposed to Avant-Garde at the Kiev Art Institute, where Kazimir Malevich and Vladimir Tatlin taught in the years prior to the ban of Avant-Garde in 1932; and their influence continued at the Institute into the 1930s, when LEMBERSKY studied there. In Leningrad LEMBERSKY visited the studios of the great Avant-Garde painter and theorist Pavel Filonov and a former member of the Knave of Diamonds, artist Aleksandr Osmerkin. At the Academy of Art, LEMBERSKY attended art history lectures given by the Avant-Garde theorist Nikolay Punin.

Lembersky's art was also formed by his rigorous classical education at the Academy, where he mastered realist and impressionist techniques at the studio of a great Russian painter Boris Ioganson. LEMBESKY was highly regarded for his expressive and nuanced work. During enforced Socialist Realism and in spite of state-imposed restrictions on Western art, LEMBERSKY continued to synthesize a wide range of influences, including German Expressionism, the French school, Mexican mural painting, Russian icons, African folk art, and Dutch and early Renaissance painting, among others. He was keenly interested in modernist and contemporary literature, poetry, and theater. Music was essential to his art, he regularly attended concerts of classical music and personally knew many musicians, including Dmitri Shostakovitch and conductor Natan Rakhlin, whose portrait he created in the Urals in 1943-44. He studied Western philosophy and mysticism. LEMBERSKY's work is intensely spiritual in defiance to atheism endorsed by the Communists. His art is centered on the idea of a two-tiered reality, expressed in painting as a union between recognizable objects and hidden symbols shown “between the lines.” He frequently included religious symbols in his paintings. He was haunted by the memory of Holocaust. His 'Execution. Babi Yar' series (1944–52) are the earliest known artistic renderings of the Nazi massacres in Kiev. In his later work, he persistently brought back Holocaust symbols to his semi-abstract canvases. The themes of war and industrial labor—as alternating forces of destruction and reconstruction—appear again and again in his work. Yet, in contrast to the gravity of the content, LEMBERSKY'S paintings appeal to his viewers with brilliant color, light and formal beauty. His art speaks to the universal experience evoking emotional response and delighting the eye.

Lembersky was born in 1913 into the family of Samuil Lembersky of Lublin, on the eve of World War One. The Russians lost Lublin to Austro-Hungarian army in 1915. The family relocated to Berdyczów (now Berdychiv, Ukraine) however, the Soviet troops destroyed most of Berdyczów during the Polish–Soviet War of 1920, and the city was ceded by Poland to the USSR following Peace of Riga. His parents remained there. In 1928 Lembersky relocated to Kiev where he attended the Jewish Arts' and Trades' School (known as “Kultur-Lige Art School”, studio of Mark Epshtein).[4] In 1930–33 he worked as set designer for the Jewish Theater in Kiev and Berdichev and in 1933–35 attended the Kiev Art Institute, studying painting with professor Pavel Volokidin. In 1935 he moved to Leningrad to study at the Russian Academy of Arts.[4]

Lembersky toured the Urals to collect material for his thesis, while the Soviet Union invaded Poland. He was in Berdichev when the Nazi Germany launched their Operation Barbarossa against the Soviet Union on June 22, 1941. As a student of the Academy, he was ordered to immediately return to Leningrad, while his parents remained in Berdichev, where they perished in Holocaust. Writer Vasily Grossman, whom Lembersky knew from childhood in Berdichev and whose family also perished in the city, collected documents and described the massacre of Berdichev in a detailed essay published the Black Book. In July 1941, Lembersky was wounded during the defense operations at the outskirts of Leningrad. He contracted typhoid and was brought back to the Academy, which was converted into a home and a hospital for its students, professors and staff during the war. Lembersky remained there during the first months of the Siege of Leningrad. He completed his thesis during the Siege and defended it in December 1941, earning a degree in easel painting with honors for academic achievement.[1]

Critically acclaimed Lembersky was among recognizable figures of Russian mid-twentieth century art. His painting style spanned from academic realism to expressive, semi-abstract and symbolist forms that rely on rich vibrant color, pastose texture and complex geometries. Despite his modernist tendencies in the later years, Lembersky considered himself a realist; in his autobiography he cited Russian icons and Russian avant-garde among the main influences on his art. Formal transformations in his work served to heighten the expression of human condition. The human image is at the center of Lembersky’s paintings, from his earlier portraits to the later compositions. His landscapes reconstruct human forms and gesture through still objects, retaining the memory of human activity, even in their absence.[citation needed]

The themes in Lembersky's art focused the Siege of Leningrad, the Miners of the Urals, Staraya Ladoga, Russian Revolution (1917), industrial sites of Nizhny Tagil and Holocaust. Three Babi Yar paintings (1944–52), which Lembersky painted following the death of his parents at the hands of the Nazis in Ukraine, are the earliest known artistic record of the massacre. The final painting of the Babi Yar cycle was created during Stalin’s vicious anti-Semitic campaign in 1952. The second painting Babi Yar painting was never exhibited in the Soviet Union, it was shown publicly for the first time at Brandeis University in 2011 marking the 70th anniversary of the massacre.

The Russian Academy of Arts, Saint Petersburg (Strike at the Urals Plant, oil, 1941)

Collection of Iosif and Natalia Zisman