From Infogalactic: the planetary knowledge core
Jump to: navigation, search
For the Arabic word for success in the context of Islam, see Falah. For the star, see 67 Ophiuchi. 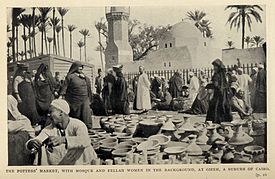 Fellah (Arabic: فلاح‎‎, fallāḥ; plural Fellaheen or Fellahin, Arabic: فلاحين‎‎, fallāḥīn) is a peasant, farmer or agricultural laborer in the Middle East and North Africa. The word derives from the Arabic word for "ploughman" or "tiller".

A fellahin could be seen wearing a simple cotton robe called galabieh (jellabiya). The word Galabieh originated around 1715–25 and derived from the Egyptian Arabic word gallabīyah (جلابية). 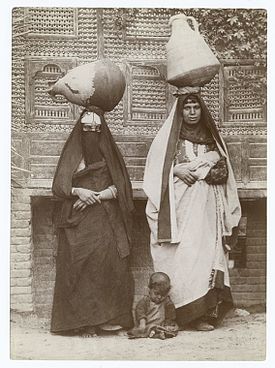 Fellahin was the term used throughout the Middle East in the Ottoman period and later to refer to villagers and farmers.[1] Nur-eldeen Masalha translates it as "peasants,".[2]

Fellahin were distinguished from the effendi, or, land-owning class,[3] although the fellahin in this region might be tenant farmers, smallholders, or live in a village that owned the land communally.[4][5] Others applied the term fellahin only to landless workers.[6] The term fallahin applied to Christian, Druze, Jewish and Muslim villagers.[7] The term fallah was applied to people from several regions in the Middle East, including those of Egypt and Cyprus.

Comprising 60% of the Egyptian population,[8] the fellahin lead humble lives and continue to live in mud-brick houses like their ancient ancestors.[citation needed] Their percentage was much higher in the early 20th century, before the large influx of Egyptian fellahin into urban towns and cities. In 1927, anthropologist Winifred Blackman, author of The Fellahin of Upper Egypt, conducted ethnographic research on the life of Upper Egyptian farmers and concluded that there were observable continuities between the cultural and religious beliefs and practices of the fellahin and those of ancient Egyptians.[9]