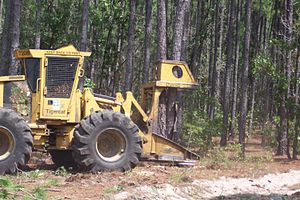 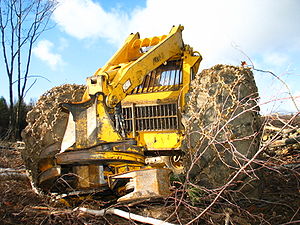 Older style felling head that uses a bar and chain to cut trees instead of the more modern saw disk. 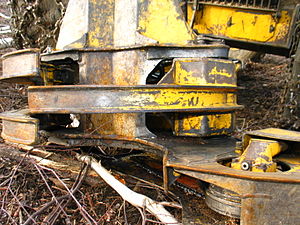 Closeup of grab arms, with chainsaw for felling trees

A feller buncher is a type of harvester used in logging. It is a motorized vehicle with an attachment that can rapidly cut and gather several trees before felling them.

Feller is a traditional name for someone who cuts down trees,[1] and bunching is the skidding and assembly of two or more trees.[2] A feller buncher performs both of these harvesting functions and consists of a standard heavy equipment base with a tree-grabbing device furnished with a chain-saw, circular saw or a shear—a pinching device designed to cut small trees off at the base. The machine then places the cut tree on a stack suitable for a skidder or forwarder, or other means of transport (yarding) for further processing (e.g., delimbing, bucking, loading, or chipping).

There are also wheeled feller bunchers with no articulated arm. Instead this type of vehicle drives close and grabs the tree.

In cut-to-length logging a harvester performs the tasks of a feller buncher and additionally does delimbing and bucking.