From Infogalactic: the planetary knowledge core
Jump to: navigation, search
This article is about felling trees. For other uses, see Felling (disambiguation). 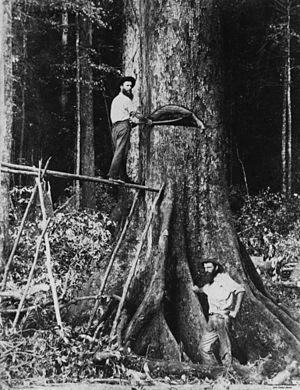 Felling is the process of downing individual trees,[1] an element of the task of logging. The person cutting the trees is a feller.[1]

In hand felling, an axe, saw, or chainsaw is used to fell a tree, followed up by limbing, bucking in traditional applications. In the modern commercial logging industry, felling is typically followed by limbing and skidding.

A feller-buncher is a motorized vehicle with an attachment which rapidly cuts and gathers several trees in the process of felling them.

In cut-to-length logging a harvester performs the tasks of a feller-buncher additionally doing the delimbing and bucking of the trees as well.