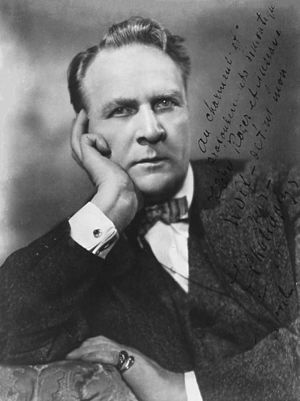 listen); February 13 [O.S. February 1] 1873 – April 12, 1938) was a Russian opera singer. Possessing a deep and expressive bass voice, he enjoyed an important international career at major opera houses and is often credited with establishing the tradition of naturalistic acting in his chosen art form.[1]

During the first phase of his career, Chaliapin endured direct competition from three other great basses: the powerful Lev Sibiriakov (1869–1942), the more lyrical Vladimir Kastorsky (1871–1948), and Dmitri Buchtoyarov (1866–1918), whose voice was intermediate between those of Sibiriakov and Kastorsky. The fact that Chaliapin is far and away the best remembered of this magnificent quartet of rival basses is a testament to the power of his personality, the acuteness of his musical interpretations, and the vividness of his performances.

He himself spelled his surname, French-style, Chaliapine in the West,[2] and his name even appeared on early HMV 78s as Theodore Chaliapine.[3] In English texts, his given name is most usually rendered as Feodor or Fyodor, and his surname is most usually seen as Chaliapin. However, in the Russian pronunciation the initial consonant Ш is pronounced like sh in shop, not as ch in chop, and in reference books the surname is sometimes given a strict romanization as Shalyapin. This spelling also better reflects the fact that the name is pronounced with three syllables (Shal-YA-pin), not four.

Feodor Chaliapin was born into a peasant family on February 1 (OS), 1873 in Kazan, in the wing of merchant Lisitzin's house on Rybnoryadskaya Street (now Pushkin Street) 10. This wing no longer exists, but the house with the yard where the wing was situated is still there. The next day, Candlemas (The Meeting of Our Lord), he was baptized in Epiphany (Bogoyavlenskaya) Church on Bolshaya Prolomnaya street (now Bauman Street). His godparents were his neighbors: the shoemaker Nikolay Tonkov and Ludmila Kharitonova, a 12-year-old girl. The dwelling was expensive for his father, Ivan Yakovlevich, who served as a clerk in the Zemskaya Uprava (Zemstvo District Council), and in 1878 the Chaliapin family moved to the village of Ametyevo (also Ometyevo, or the Ometyev settlements, now a settlement within Kazan) behind the area of Sukonnaya Sloboda, and settled in a small house.

His vocal teacher was Dmitri Usatov. Chaliapin began his career at Tbilisi and the Imperial Opera, St. Petersburg in 1894. He was then invited to sing at the Mamontov Private Opera (1896–1899); his first role there was as Mephistopheles in Gounod's Faust, in which he was a considerable success.

At Mamontov he also met Sergei Rachmaninoff, who was serving as an assistant conductor there and with whom he remained friends for life. Rachmaninoff taught him much about musicianship, including how to analyze a music score, and insisted that Chaliapin learn not only his own roles but also all the other roles in the operas in which he was slated to appear. With Rachmaninoff he learned the title role of Mussorgsky's Boris Godunov, which became his signature character.[4] Chaliapin returned the favor by showing Rachmaninoff how he built each of his interpretations around a culminating moment or "point." Regardless of where that point was or at which dynamic within that piece, the performer had to know how to approach it with absolute calculation and precision; otherwise, the whole construction of the piece could crumble and the piece could become disjointed. Rachmaninoff put this approach to considerable use when he became a full-time concert pianist after World War I.[5]

On the strength of his Mamontov appearances, the Bolshoi Theatre in Moscow engaged Chaliapin, where he appeared regularly from 1899 until 1914. During the First World War, Chaliapin also appeared regularly at the Zimin Private Opera in Moscow. In addition, from 1901, Chaliapin began touring in the West, making a sensational debut at La Scala that year as the devil in a production of Boito's Mefistofele, under the baton of one of the 20th century's most dynamic opera conductors, Arturo Toscanini. At the end of his career, Toscanini observed that the Russian bass was the greatest operatic talent with whom he had ever worked. The singer's Metropolitan Opera debut in the 1907 season was disappointing due to the unprecedented frankness of his stage acting; but he returned to the Met in 1921 and sang there with immense success for eight seasons, New York's audiences having grown more broad-minded since 1907. In 1913, Chaliapin was introduced to London and Paris by the brilliant entrepreneur Sergei Diaghilev, at which point he began giving well-received solo recitals in which he sang traditional Russian folk songs as well as more serious fare. Among these folk songs were Along Peterskaya, which he recorded with a British-based Russian folk-instrument orchestra, and the song which he made famous throughout the world: The Song of the Volga Boatmen. 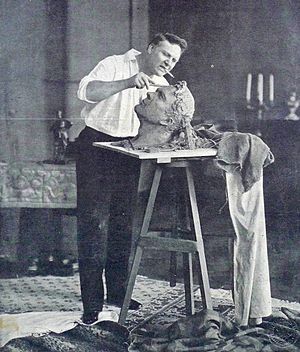 Chaliapin creating his self-portrait in 1912

Chaliapin toured Australia in 1926, giving a series of recitals which were highly acclaimed. Privately, Chaliapin's personal affairs were in a state of disarray as a consequence of the Russian Revolution of 1917. At first he was treated as a revered artist of the newly emerged Soviet Russia. However, the harsh realities of everyday life under the new regime, and the unstable climate which followed because of the ensuing Civil War, combined with, reportedly, the encroachment on some of his property by the Communist authorities,[7] caused him to remain perpetually outside Russia after 1921. He still maintained, however, that he was not anti-Soviet. Chaliapin initially moved to Finland and later lived in France. Cosmopolitan Paris, with its significant Russian émigré population, became his base, and ultimately, the city of his death. He was renowned for his larger-than-life carousing during this period, but he never sacrificed his dedication to his art.

Chaliapin's attachment to Paris did not prevent him from pursuing an international operatic and concert career in England, the United States, and further afield. In May 1931 he appeared in the Russian Season directed by Sir Thomas Beecham at London's Lyceum Theatre. His most famous part was the title role of Boris Godunov (excerpts of which he recorded 1929–31 and earlier). He is remembered also for his interpretations of Ivan the Terrible in Rimsky-Korsakov's The Maid of Pskov, Mephistopheles in Gounod's Faust, Don Quixote in Massenet's Don Quichotte, King Philip in Verdi's Don Carlos and Bertram in Meyerbeer's Robert le Diable.

Largely owing to his advocacy, Russian operas such as Mussorgsky's Boris Godunov and Khovanshchina, Glinka's Ivan Susanin, Borodin's Prince Igor and Rimsky-Korsakov's The Tsar's Bride and Sadko, became well known in the West.

Chaliapin made one sound film for the director G. W. Pabst, the 1933 Don Quixote. The film was made in three different versions – French, English, and German, as was sometimes the prevailing custom. Chaliapin starred in all three versions, each of which used the same script, sets, and costumes, but different supporting casts. The English and the French versions are the most often seen, and both were released in May 2006 on a DVD. Pabst's film was not a version of the Massenet opera but a dramatic adaptation of Miguel de Cervantes' novel, with music and songs by Jacques Ibert.

In 1932, Chaliapin published a memoir, Man and Mask: Forty Years in the Life of a Singer. While touring Japan in 1936 he was suffering from a toothache, and a hotel chef devised a way to cook a steak to be extra tender for him. This dish is known in Japan as a Chaliapin Steak to this day.

Chaliapin's last stage performance took place at the Monte Carlo Opera in 1937, as Boris. He died the following year of leukemia, aged 65, in Paris, where he was interred. In 1984, his remains were transferred from Paris to Moscow in an elaborate ceremony. They were re-buried in the Novodevichy Cemetery.[8] 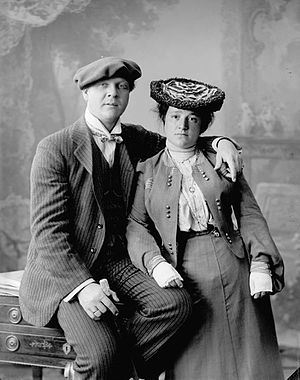 Chaliapin was married twice. He met his first wife, Italian ballerina Iola Tornagi (1873–1965), in Nizhny Novgorod. They married in Russia in 1898 and had six children: Igor, Boris (1904–1979), Irina, Lidia and twins Feodor (1905–1992) and Taniya. Igor died aged four. Feodor Jr. was a character actor featured in Western motion pictures including Moonstruck and The Name of the Rose opposite Sean Connery.[9] Boris was a well-known graphical artist, who painted the portraits used on 414 covers of the Time magazine between 1942 and 1970.[10] 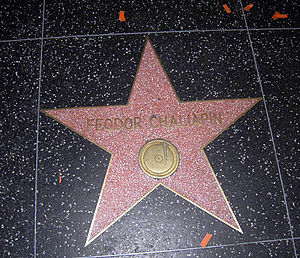 Chaliapin's star on the Hollywood Walk of Fame 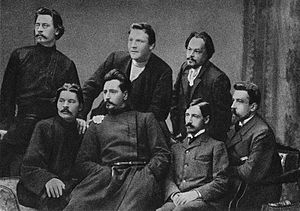 Chaliapin (center) with fellow members of the Moscow Sreda in 1902

Chaliapin's autobiographical collaboration with Maxim Gorky occurred in 1917. He had already begun writing his autobiography long before, in the Crimea. In 1917, while he was in the south of France, he was urged to write such a work by a French journalist who hoped to ghost-write it. Gorky, who was his intimate friend and was then living in Capri, persuaded Chaliapin to stay with him there and with the help of a secretary a great deal of information was taken down which Gorky fashioned into a long manuscript, published in Russia in 1917 as a series of articles in the journal Letopis. Meanwhile, Chaliapin attempted to sell it to an American publisher, who refused it on learning that it had been published in Russian. There was a rift with Gorky, and Chaliapin worked with another editor to produce a 'new' version of his original text. This was published in America as Pages of My Life (Harper and Brothers, New York 1927), took the story only up to 1905, and lacked the depth, style and life of Gorky's version. Then, in 1932, Chaliapin published Man and Mask (Alfred A. Knopf, New York) to celebrate the fortieth anniversary of his first stage appearance. The original manuscript of the Gorky version was first translated and published in English in 1967, by Nina Froud and James Hanley, as Chaliapin: An autobiography as told to Maxim Gorky (Stein and Day, New York), and included an appendix of original correspondence including a section relating to Gorky.[14]

Chaliapin possessed a high-lying bass voice with an unmistakable timbre which recorded clearly. He cut a prolific number of discs for His Master's Voice, beginning in Russia with acoustical recordings made at the dawn of the 20th Century, and continuing through the early electrical (microphone) era. Some of his performances at the Royal Opera House, Covent Garden, in London were recorded live in the 1920s, including a haunting version of the "Death of Boris" from Boris Godunov. His last disc, made in Tokyo in 1936, was of the famous The Song of the Volga Boatmen. Many of his recordings were issued in the United States by RCA Victor. His legacy of recordings is available on CDs issued by EMI, Preiser, Naxos and other commercial labels. They consist of songs as well as a range of arias from Italian, French and, naturally enough, Russian opera. He is at his idiomatic best when performing the musical compositions of his compatriots.

Opinions on his art