Feodosia (Russian: Феодо́сия, Feodosiya; Ukrainian: Феодо́сія, Feodosiia;[2] also Theodosia Greek: Θεοδοσία), is a port and resort, a town of regional significance in Crimea on the Black Sea coast. Feodosia serves as the administrative center of Feodosia Municipality, one of the regions into which Crimea is divided. During much of its history the city was known as Caffa (Ligurian: Cafà) or Kaffa (Crimean Tatar: Kefe). Population: 69,038 (2014 Census).[3]

Feodosiya (Theodosia) and other Greek colonies along the north coast of the Black Sea (Euxine Sea) from the 8th to the 3rd century BC.

The city was founded as Theodosia (Θεοδοσία) by Greek colonists from Miletos in the 6th century BC. Noted for its rich agricultural lands, on which its trade depended, it was destroyed by the Huns in the 4th century AD.

Theodosia remained a minor village for much of the next nine hundred years. It was at times part of the sphere of influence of the Khazars (excavations have revealed Khazar artifacts dating back to the 9th century) and of the Byzantine Empire.

Like the rest of Crimea, this place (village) fell under the domination of the Kipchaks and was conquered by the Mongols in the 1230s.

Between 1204–1261 and again in 1296–1307, the city of Caffa was ruled[citation needed] by Genoa's chief rival, the Republic of Venice. In the late 13th century, traders from the Republic of Genoa arrived and purchased the city from the ruling Golden Horde. They established a flourishing trading settlement called Caffa (or Kaffa), which virtually monopolized trade in the Black Sea region and served as a major port and administrative center for the Genoese settlements around the Sea. It came to house one of Europe's biggest slave markets. Under Genoa since 1266, Caffa was governed by a Genoese consul, who since 1316 was in charge of all Genoese Black Sea colonies.

In early 1318 Pope John XXII established a Latin Church diocese of Caffa, as a suffragan of Genoa. The papal bull of appointment of the first bishop attributed to him a vast territory: a villa de Varna in Bulgaria usque Sarey inclusive in longitudinem et a mari Pontico usque ad terram Ruthenorum in latitudinem. The first bishop was Fra' Gerolamo, who had already been consecrated seven years before as a missionary bishop ad partes Tartarorum. The diocese ended as a residential bishopric with the capture of the city by the Ottomans in 1475.[4][5][6] Accordingly, Caffa is today listed by the Catholic Church as a titular see.[7]

It is believed that the devastating pandemic the Black Death entered Europe for the first time via Caffa in 1347, through the movements of the Golden Horde. After a protracted siege during which the Mongol army under Janibeg was reportedly withering from the disease, they catapulted the infected corpses over the city walls, infecting the inhabitants, in one of the first cases of biological warfare. Fleeing inhabitants may have carried the disease back to Italy, causing its spread across Europe. However, the plague appears to have spread in a stepwise fashion, taking over a year to reach Europe from Crimea. Also, there were a number of Crimean ports under Mongol control, so it is unlikely that Caffa was the only source of plague-infested ships heading to Europe. In addition, there were overland caravan routes from the East that would have been carrying the disease into Europe as well.[8]

Caffa eventually recovered. The thriving, culturally diverse city and its thronged slave market have been described by the Spanish traveler Pedro Tafur, who was there in the 1430s.[9] 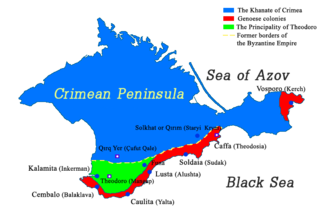 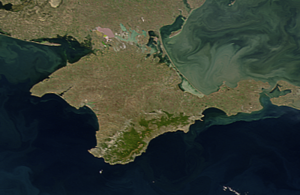 Satellite image. The Genoese ports and later Turkish-controlled area were south of the mountains. 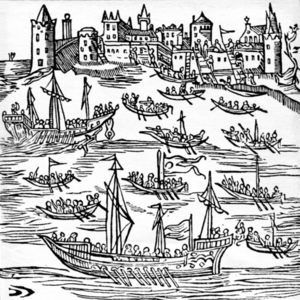 In 1462 Caffa placed itself under the protection of King Casimir IV of Poland.[citation needed] However, Poland did not offer help when real danger came.

Following the fall of Constantinople, Amasra, and lastly Trebizond, the position of Caffa had become untenable and attracted the attention of Ottoman Sultan Mehmed II. He was at no loss for a pretext to extinguish this last Genoese colony on the Black sea. In 1473, the tudun (or governor) of the Crimean Khanate died and a fight developed over the appointment of his successor. The Genoese involved themselves in the dispute, and the Tatar notables who favored the losing candidate finally asked Mehmed to settle the dispute. Mehmed dispatched a fleet under the Ottoman commander Gedik Ahmet Pasha, which left Istanbul 19 May 1475. It anchored before the walls of the city on 1 June, started the bombardment the next day, and on 6 June the inhabitants capitulated. Over the next few days the Ottomans proceeded to extract the wealth of the inhabitants, and abduct 1,500 youths for service in the Sultan's palace. On 8 July the final blow was struck when all inhabitants of Latin origin were ordered to relocate to Istanbul, where they founded a quarter (Kefeli Mahalle) which was named after the town they had been forced to leave.[10] Renamed Kefe, Caffa became one of the most important Turkish ports on the Black Sea.

In 1615 Zaporozhian Cossacks under the leadership of Petro Konashevych-Sahaidachny destroyed the Turkish fleet and captured Caffa. Having conquered the city, the cossacks released the men, women and children who were slaves.

Ottoman control ceased when[citation needed](no in 1774, 9y before) the expanding Russian Empire conquered the whole Crimea in 1783. It was renamed Feodosiya (Ѳеодосія, reformed spelling: Феодосия), after the traditional Russian reading of the ancient Greek name. In 1900 Zibold constructed the first air well (dew condenser) on mount Tepe-Oba near Feodosiya.

The city was occupied by the forces of Nazi Germany during World War II, sustaining significant damage in the process. The Jewish population numbering 3,248 before the German occupation was murdered by SD-Einsatzgruppe D between November 16 and December 15, 1941.[11] A witness interviewed by Yahad-In Unum described how the Jews were rounded-up in the city: "Posters anounced that the Jews had to go to jail with food reserves for three days because they will be taken to Israel."[12] A monument commemorating the Holocaust victims is situated at the crossroads of Kerchensky and Symferopolsky highways. On Passover eve, April 7, 2012, unknown persons desecrated, for the sixth time, the monument, allegedly as an anti-Semitic act.[13] All native Tatar inhabitants were arested by Russian forces, following Stalin orders and sent to Kazakhstan, Uzbekistan and other Central Asian republics of the USSR. This was the most important ethnic cleansing of Crimea.

The climate is warm and dry and could be described as either humid subtropical, but not as Mediterranean, because there is no apparent drying trend in the summer. 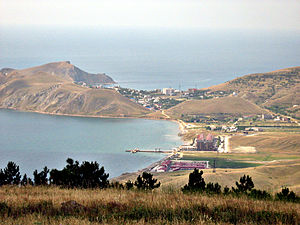 Modern Feodosiya is a resort city with a population of about 85,000 people.[citation needed] It has beaches, mineral springs, and mud baths, sanatoria, and rest homes. Apart from tourism, its economy rests on agriculture and fisheries, local industries include fishing, brewing and canning. As with much of the Crimea, most of its population is ethnically Russian; the Ukrainian language is infrequently used. In June 2006, Feodosiya made the news with the 2006 anti-NATO port riot.

While most beaches in Crimea are made of pebbles, there is a unique Golden Beach (Zolotoy Plyazh) made of small seashells in Feodosiya area. Golden Beach stretches for 15 km.

The city is sparsely populated during the winter months. Most cafes and restaurants are closed. Business and tourism increase in mid-June and peak during July and August. Like in the other resort towns in Crimea, the tourists come mostly from the C.I.S. countries of the former Soviet Union. Feodosiya was the city where the seascape painter Ivan Aivazovsky lived and worked all his life, and where general Pyotr Kotlyarevsky and the writer Alexander Grin spent their declining years. Popular tourist locations include the Aivazovsky National Art Gallery and the Genoese fortress.

The late-medieval city of Caffa is the locale in a section of the novel Caprice and Rondo by Dorothy Dunnett.