Ferdinand Schörner (12 June 1892 – 2 July 1973) was a General and later Field Marshal (Generalfeldmarschall) in the German Army (Wehrmacht Heer) during World War II. He was one of 27 people to be awarded the Knight's Cross of the Iron Cross with Oak Leaves, Swords and Diamonds (Ritterkreuz des Eisernen Kreuzes mit Eichenlaub, Schwertern und Brillanten) and one of the youngest German generals. The Knight's Cross of the Iron Cross and its higher grade the Oak Leaves, Swords and Diamonds was awarded to recognize extreme battlefield bravery or outstanding military leadership.

Schörner was a convinced Nazi and became infamous for his brutality. By the end of World War II he was Hitler's favorite commander.[3] He was also the last of Hitler's field marshals to die. 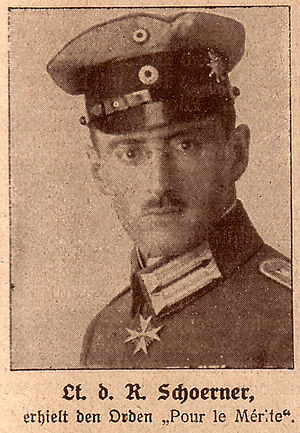 Schörner was born on 12 June 1892 in Munich in the Kingdom of Bavaria, a federated state of the German Empire. A noted veteran of World War I, he was awarded the Pour le Mérite military order as a lieutenant when he took part in the Austro-Hungarian and German Caporetto Offensive, which shattered the Italian lines in the fall of 1917.

Schörner served as a staff officer and instructor between the two wars. In 1923 he was adjutant to General von Lossow, the Commander of Military District VII in Munich, and participated in the defeat of the Beer Hall Putsch. As an army instructor he was instrumental in turning the Waffen SS from a paramilitary force into a corps of military stormtroopers able to fight alongside the Heer.

Schörner was highly successful during the German campaigns in Poland, commanding the 98th Mountain Regiment. During the Balkans campaign he commanded the German 6th Mountain Division and earned the Knight's Cross for his role in breaching the famous Metaxas Line. He remained with this division for the remainder of the year and took part in Operation Barbarossa. When the German invasion of the Soviet Union began, the 6th Gebirgs Division was assigned to the Arctic sectors in the Eastern Front. In 1942 as a General der Gebirgstruppe he took command of the XIX Mountain Corps, part of the German Army in Finland. With this command he participated in the failed attack on Murmansk and the stalemate war that resulted from it. His famous statement "Arktis ist nichts" ("the Arctic is nothing") originated here, meaning that Arctic climatic conditions were not bad enough to negatively affect the German soldiers. Schörner's primary job was to keep the Pechenga Nickel Works in German hands. When the Soviets opened an offensive against the Arctic sector, the 6th Gebirgs Division took part in the defence; it is said that during these battles, Schörner took part in hand-to-hand combat alongside his men. In January 1942, Schörner was promoted to the rank of Generalleutnant, commanding the Mountain Corps Norway. While commanding the Mountain Corps Norway, Schörner held off further Soviet offensives.

He later commanded the German XXXX Panzer Corps on the Eastern Front from November 1943 to January 1944. In March 1944 he was made commander of Army Group A, and in May commander of Army Group South Ukraine. After initially stating that the Crimean port of Sevastopol could be held for a long time even if Crimea fell, he changed his mind and, against Hitler's wishes, evacuated the Black Sea port.[4] This retreat occurred too late, and the German/Romanian 17th Army that was holding Crimea suffered severe losses, with many men killed or captured while waiting on the piers to be evacuated. During the late spring of 1944, Schörner managed to stabilize the crumbling front in the south in a series of defensive battles on the Dniester River in Romania.

Schörner was promoted to the rank of Generaloberst in April 1944. In July he became commander of Army Group North, which was later renamed Army Group Courland, where he stayed until January 1945 when he was made commander of Army Group Centre, defending Czechoslovakia and the upper reaches of the River Oder. He became a favorite of high-level Nazi leaders such as Joseph Goebbels, whose diary entries from March and April 1945 have many words of praise for Schörner and his methods. Finally, on 4 April 1945, Schörner was promoted to field marshal and was named as the new Commander-in-Chief of the German Army (Oberbefehlshaber des Heeres) in Hitler's last testament.[5] He nominally served in this post until the surrender of the Third Reich on 8 May 1945, but in reality, continued to command his army group, since no staff was available to him. He did not have any discernible influence in the final days of the Reich.

On 7 May, the day General Alfred Jodl, Chief-of-Staff of German Armed Forces High Command (German acroynym OKW), was negotiating the surrender of all German forces at SHAEF, the last the OKW had heard from Schörner was on 2 May. He had reported he intended to fight his way west and surrender his army group to the Americans. On 8 May, an OKW colonel, Wilhelm Meyer-Detring, was escorted through the American lines to contact Schörner. The colonel reported that Schörner had ordered his operational command to observe the surrender, but he could not guarantee that he would be obeyed everywhere.[6][lower-alpha 1] In fact, Schörner ordered a continuation of fighting against Red Army and Czech insurgents.[citation needed] Later that day, Schörner deserted his command and flew to Austria, where he was arrested by the Americans on 18 May.[6] Elements of Army Group Centre continued to resist the overwhelming force of the Red Army liberating Czechoslovakia during the final Prague Offensive. Units of Army Group Centre, the last major German units to surrender, capitulated on 11 May 1945.

Schörner was arrested in August 1951 by the Soviet authorities on charges that "he occupied positions of command in the former German Army, actively participating in the preparation and carrying on of a criminal war against the USSR in violation of international law and treaties." In February 1952 the Military Board of the USSR Supreme Court sentenced him to 25 years' imprisonment. A decree of the Presidium of the Supreme Soviet in April 1952 reduced this sentence to 12 and a half years. A decree of December 1954 allowed him to be handed over to authorities of the German Democratic Republic, who allowed him to leave for West Germany in 1958. There he was arrested and charged with the illegal executions of German Army soldiers accused of desertion. He was found guilty and sentenced to four and a half years' jail, which he served. He was released in 1963 and lived in obscurity in Munich until his death in 1973. In the late 1960s he gave a lengthy interview to Italian historian Mario Silvestri that centered on his role and actions during the Austro-German victory at the battle of Caporetto in World War I rather than on his World War II service.[lower-alpha 2]

At the time of his death he was the last living German field marshal, having outlived Erich von Manstein by 23 days. He is buried in Mittenwald. The last-dying German officer of this equivalent highest flag rank in all military services was Großadmiral Karl Dönitz, who succeeded Hitler as head of government and who died in 1980. No field marshals or grand admirals have been appointed since Dönitz surrendered the German state in 1945.

German veterans particularly criticized Schörner for a 1945 order that all soldiers found behind the front lines, who did not possess written orders to be in that particular area, were to be court-martialed on the spot and hanged if found guilty of desertion.[17] This is mentioned in the writings of Siegfried Knappe, Hans von Luck, and Joseph Goebbels. "Deserters get no mercy from him," Goebbels wrote of Schörner on 11 March 1945. "They are hanged from the nearest tree with a placard round their necks saying: 'I am a deserter. I have declined to defend German women and children and therefore I have been hanged.'" The approving Goebbels continued with, "Naturally such methods are effective. Every man in Schörner's area knows that he may die at the front but will inevitably die in the rear." Gottlob H. Bidermann, a German infantry officer who served in Schörner's command in 1944-45, reported in his memoirs that the General was despised by officers and men alike.

Schörner was said to never have uttered a word of praise, and would demote or punitively transfer soldiers on the spot for the most minor infractions, even as the war was ending. Bidermann was especially bitter that while Schörner's men were marched off to die in Soviet POW camps at the cessation of hostilities, Schörner made certain that he personally avoided their fate. When captured by the Americans in their sector, Schörner is said to have been dressed as a Bavarian non-combatant, behavior he had only recently had his soldiers executed for.

Though despised by his men, Schörner was loved in Berlin. He was very devoted to Hitler, a view that is seen as confirmed by Hitler's appointment of Schörner as his replacement as Commander-in-Chief of the German Army on his suicide; (see Hitler's Last Will). Moreover, Schörner did not hesitate to second Hitler's daydreams in the last weeks of the war, agreeing that the Red Army's main objective would be Prague instead of Berlin (in itself a colossal strategic blunder), and so leading him to weaken the already critically thin defense lines in front of the German capital to counter this perceived threat. Ian Kershaw described him in 2011 (BBC History Magazine) as "extraordinarily brutal".

In his book "The End" (p50) the historian Ian Kershaw describes Schörner as "a fanatical (Nazi) loyalist", an indication of this being that he had served for a brief spell in March 1944 as Chief of the NS Leadership Staff of the Army. The latter was responsible for coordinating relations between the military and the Nazi party.